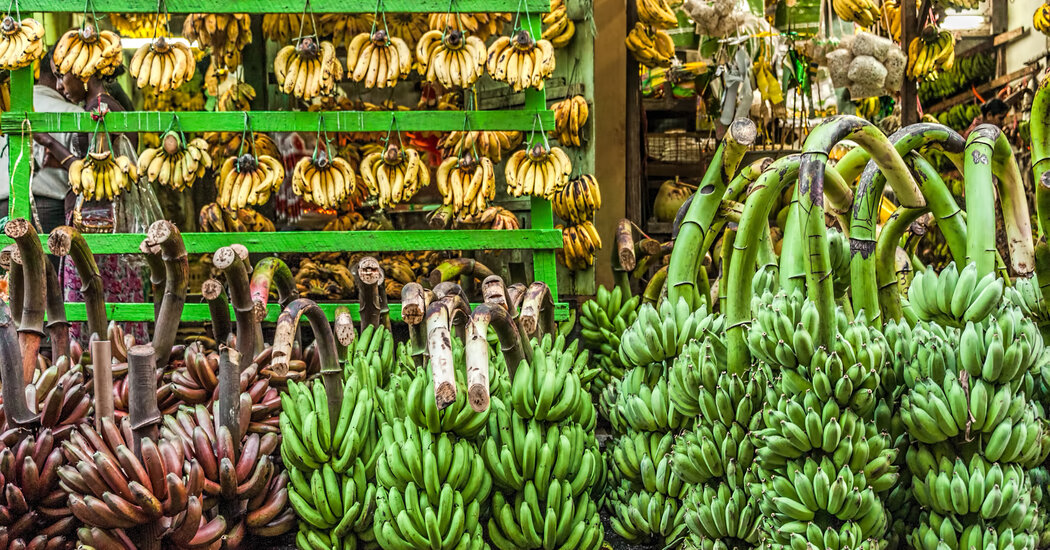 A new study shows that domesticated bananas have genetic markers tying them to three types of wild bananas that have not yet been found.

Bananas, it turns out, are not what we thought they were.

Sure, most, when ripe, are yellow and sweet and delicious slathered in peanut butter. But a global survey reveals many more appealing counterparts than the generic banana found in American supermarkets, with edible varieties that can be red or blue, squat or bulbous, seeded or seedless.

And the banana family tree as a whole is even more diverse, and mysterious, than previously thought, according to a study published earlier this month in the journal Frontiers in Plant Science.

“The diversity of bananas is not as well described, as well documented, as we thought,” said Julie Sardos, a botanist at the Bioversity International research group, and an author of the study. “It was really overlooked by past researchers.”

She and her colleagues analyzed genetic material from hundreds of different bananas and found that there were at least three wild banana ancestors not yet discovered by botanists. Like the revelation of a long-lost relative, knowing that these missing wild ancestors are out there could change the way we see bananas and provide potential ways to strengthen the crops against disease.

Wild bananas, or Musa acuminata, have flesh packed with seeds that render the fruit almost inedible. Scientists think bananas were domesticated more than 7,000 years ago on the island of New Guinea. Humans on the island at the time bred the plants to produce fruit without being fertilized and to be seedless. They were able to develop pretty tasty bananas without formal knowledge of the principles of inheritance and evolution.

As trading routes and linguistic connections spread, so did the new banana. It picked up genetic complexity as farmers crossbred it with other wild banana species in regions that became Indonesia, Malaysia and India.

Today, it is possible to use genetic markers to trace these bananas back to their ancestors by simulating breeding patterns in a computer program. This procedure can reveal what kind of trading routes and agricultural practices were established in different communities. And, Dr. Sardos said, “Understanding how banana fruits full of big hard seeds transformed into seedless fleshy edible fruits is an exciting mystery to investigate.”

But when Dr. Sardos and her colleagues ran this analysis on a collection of domesticated bananas, they found that there were three ancestors that they couldn’t account for. One seemed to have a strong genetic imprint on bananas in Southeast Asia. Another was localized around the island of Borneo. The third seemed to be from New Guinea. But, other than leaving their genetic mark in certain geographic clusters of domesticated banana plants, these wild ancestors remained completely mysterious to the scientists.

“Their data is suggesting that there was some domestication in parts of the South Pacific which had not previously been considered,” said James Leebens-Mack, a plant biologist at the University of Georgia who was not involved in the new study. “That’s really cool.”

The discovery of these mystery ancestors is also practical. Seedless, automatically fruit-bearing bananas are sterile, which makes the modern breeding of different bananas incredibly complex, according to Dr. Sardos. “You have to go back to wild bananas,” she said, and figure out how to make fertile plants similar to the edible bananas. Then, you have to breed those plants with others to create a new, edible, sterile banana.

The difficulty of breeding new bananas has led most plantations around the world, primarily in Africa and Central America, to only grow one type: the Cavendish, which is the most widely consumed variety in the world. That’s risky, though, because the low genetic diversity of banana crops makes them susceptible to disease outbreaks.

“You hear it all the time,” Dr. Leebens-Mack said. “At some point, there’s going to be a banana famine, a disease run rampant among plantations.”

Breeders will need to go back to wild bananas to diversify banana genetics and make crops more resilient. They can look at different wild traits and decide which ones may be best for preventing disease, fungal outbreaks or even adaptation to climate extremes. “Maybe the solution is we don’t just stick with our typical banana, we take advantage of these other cultivated lines,” said Pamela Soltis, a botanist at the Florida Museum of Natural History who was not involved in the study.

To do this, though, the banana family tree must be clearer. Dr. Sardos hopes that the discovery of mysterious banana ancestors might spur scientists to do more digging into the crop’s genetic history.

“What we expect, even if it’s not really precise, is to add some weight to the plea for more expeditions for the collection of bananas,” she said.

Mathieu Rouard, another author of the study and a colleague of Dr. Sardos’s at Bioversity International who has been studying bananas for nearly 20 years, added, “My friends and family, they are always amazed I’m still working on bananas. But there are still lots of things to discover, even after all this time.”

The great banana search is on.

Give Yourself a Break

Covid vaccination for all grownups to begin with these days, but a number of...

‘Not afraid of anyone, can’t be intimidated with jail’: Mamata Banerjee