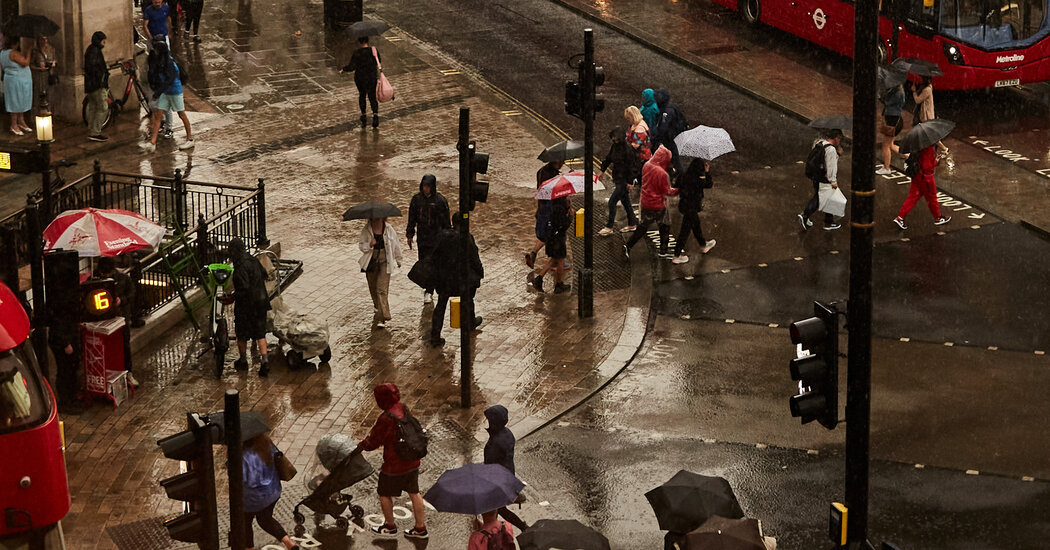 Why Europe’s inflation crisis is different from America’s.

Political and economic crises typically have multiple causes. But many right now are driven by one main factor: the rising cost of living.

In Britain, Prime Minister Liz Truss is facing calls to resign after just six weeks in office over a now-abandoned tax cut plan that experts warned would worsen inflation, if not wreak economic havoc. Europe is bracing for skyrocketing energy costs this winter. In the U.S., the Federal Reserve is considering more aggressive steps to bring down price increases, but its moves could also cause a recession, as The Times reported yesterday.

This chart by my colleague Ashley Wu shows how quickly prices have risen across many of the world’s advanced democracies. Officials generally aim to keep the rate of inflation around 2 percent — enough to keep the economy growing yet preserve stability in prices. Many of the countries are at least four times above that pace:

So what happened? It helps to think of inflation as two related crises instead of one. In the first, global disruptions from the pandemic and Russia’s invasion of Ukraine prompted inflation to spike around the world. In the second, some countries — particularly the U.S. — also made inflation worse for themselves through domestic policy decisions. In today’s newsletter, I’ll explain both.

From 2020 to early 2022, Covid largely explained the trends on the chart. The pandemic and its fallout created a supply shortage (factories closed and logistics chains sputtered) and a spike in demand (for purchases like home furniture and airfares). That imbalance prompted price increases.

The chart’s trends show a change near the beginning of this year. From last year until early 2022, prices in the U.S. rose more quickly than in the other countries. But the E.U. and Britain are now ahead, as data released today demonstrates. (The outlier is Japan, which has dealt with a stagnating economy and deflation for decades.)

Europe began outpacing the U.S. when the war in Ukraine created its own disruptions. Russia’s invasion shut down Ukraine — one of the world’s breadbaskets and a major exporter of grain — and raised food prices. And Western sanctions in response to the war cut off Europe from Russian oil and gas, on which the continent relied heavily. So worldwide energy prices went up, too.

As this second chart by Ashley shows, Europe took the hardest hit. The war affected energy costs in other parts of the world, but countries less dependent on Russian oil and gas adapted more quickly:

Europe’s challenge now is finding alternative energy sources. Building up the infrastructure, after dedicating pipelines and terminals to Russian oil and gas, will take time.

Even countries with bigger buffers from the supply shock are taking steps to address energy prices. The Department of Energy is planning to release 15 million more barrels of oil from strategic reserves.

Government responses to the global crises also influenced inflation, at times making it worse than it otherwise would have been.

Policymakers’ initial instinct during the pandemic was economic preservation. To prevent Covid from setting off a deep recession, they enacted relief measures. In some cases, they might have gone too far: The point of stimulus packages is to elevate spending and demand, keeping the economy afloat. But if supply can’t keep up with the new demand, prices will rise.

Once they did, central banks were also slow to respond — believing that the inflation would subside as the impact of global catastrophes like the pandemic faded. So inflation increased unchecked.

The U.S. suffered from both problems. America spent among the most of any country in the world on economic relief, likely leading to too much demand and then worse inflation. And for much of 2021, the Federal Reserve viewed rising prices as a temporary phenomenon; it didn’t acknowledge that inflation was enduring until late last year.

That combination of overstimulus and central bank inaction helps explain why the U.S. had the highest inflation rate among its peers until Russia’s invasion of Ukraine.

If it weren’t for the war, the U.S. could still be worse off than the others. America still has a higher core inflation rate, which excludes food and energy prices, than many of its peers — indicating it has deeper problems than the global events that are primarily driving up food and energy costs. The labor market in particular remains hot, with an unusually high number of job openings for each unemployed worker. These are the problems that the Fed is trying to address without causing a deep recession (as I explained in this newsletter).

In simple terms: Inflation is the big problem. But in Europe, the causes and solutions are related to supply. And in the U.S., they are more about demand.

Xi Jinping’s reign has been an unexpected blessing for the U.S., Bret Stephens says.

Maya codex: The oldest surviving book in the Americas.

A Times classic: When a journalist played Cupid for a dating app founder.

Lives Lived: Charles W. Duncan Jr. got into the energy business as a Texas roustabout digging pipeline ditches and later became Jimmy Carter’s energy secretary at the height of the 1979 oil crisis. He died at 96.

Yankees and Phillies earn wins: The Yankees advanced to meet the Astros in the A.L.C.S. with a 5-1 win over Cleveland. And Philadelphia is up 1-0 in the N.L.C.S. after a gritty 2-0 victory in San Diego last night, thanks to home runs from Bryce Harper and Kyle Schwarber.

Celtics start strong: The defending Eastern Conference champions defended their turf on opening night with a 126-117 win over the 76ers, who many think could supplant Boston as the East’s best this season.

Time to book that flight

If you’re traveling for the holidays, buy your airfare as soon as possible. “The best time to have booked those Thanksgiving and Christmas flights was June and July,” says Scott Keyes, the founder of Scott’s Cheap Flights. “And the second best is basically now.”

That’s one of the tips from The Times’s new guide to holiday travel. Domestic travel will be particularly pricey this year — it costs more to book Thanksgiving flights to Cedar Rapids, Iowa, than to go to Lisbon around the same time. But there are ways to save money. The guide includes some of the cheapest days to fly, many of which fall on Mondays.

Make these takeout-style sesame noodles in 15 minutes. Here are our favorite easy pasta and noodle dishes.

What to Listen to

As Björk releases her 10th studio album, “Fossora,” look back at some of her best outfits.

With Halloween coming up, stream these five horror movies.

The pangram from yesterday’s Spelling Bee was flatbed. Here is today’s puzzle.

P.S. The Dow suffered its largest ever single-day percentage drop 35 years ago today in the Black Monday global stock crash.

“The Daily” is about the Los Angeles City Council. On “The Argument,” what is political polling good for?