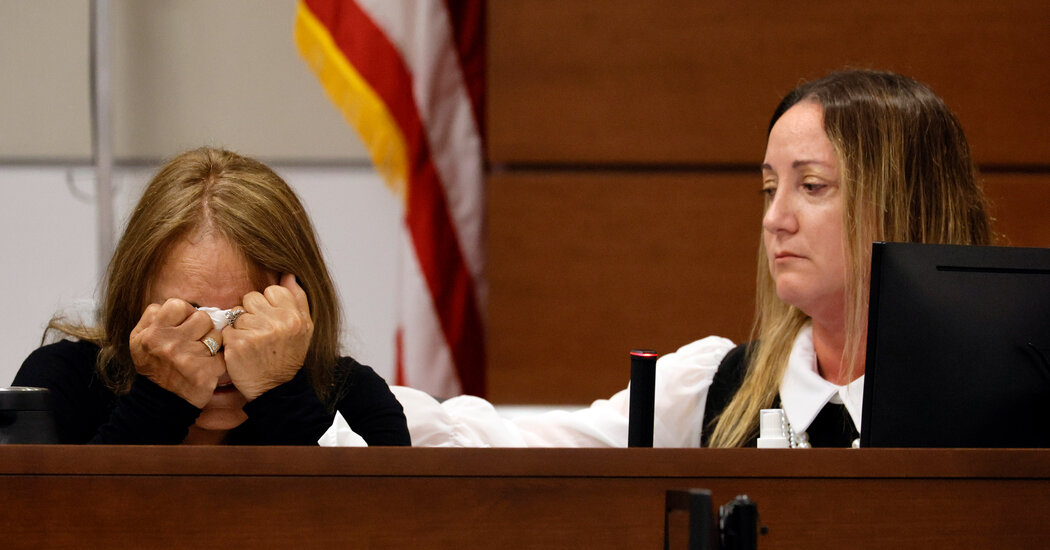 The rare trial of a gunman in a mass shooting has underscored how massacres shatter families and communities over time.

FORT LAUDERDALE, Fla. — Peter Wang’s mother has four tattoos memorializing her 15-year-old son, one inked on Feb. 14 each year since he was killed. Carmen Schentrup’s parents find sleep elusive. Nicholas Dworet’s mother hesitates every time someone asks her, “How many kids do you have?”

Joaquin Oliver’s mother cannot bear to join relatives for family celebrations because her son is gone. Jaime Guttenberg’s mother finds it impossible to watch her beloved Florida Gators play football, because they were also her daughter’s favorite team. Gina Montalto’s father struggles with his marriage, strained from grieving the loss of his daughter.

One by one, the relatives and friends of the 17 people killed at Marjory Stoneman Douglas High School in Parkland, Fla., took the stand in court this week and divulged to a jury the depths of their despair since losing loved ones to gunfire four years ago on Valentine’s Day. Over four days of profoundly emotional testimony, they shared painful and intimate details that laid bare how their internal lives remain shattered and how massacres like Parkland leave families with years of unresolved sorrow.

“I have a box over my heart with a lid so tightly closed, trying to keep all my emotions under control,” said Linda Beigel Schulman, who lost her son, Scott J. Beigel, a geography teacher. “But today, I’m taking the lid off that box.”

The heart-rending testimony concluded on Thursday after the jury deciding the fate of the gunman, Nikolas Cruz, toured the school building where the mass shooting took place. Prosecutors left the viewing of the crime scene, an exceedingly rare and visceral occurrence in a criminal trial, for the last day of their nearly three-week presentation and rested their case.

What the 12 jurors and 10 alternates saw inside Building 12 of Stoneman Douglas High, which has been fenced off and unused since the day of the shooting, was a moment frozen in time, a joyful holiday interrupted by a deadly rampage. Bullet holes pocked the doors and walls. Bits of shattered glass crunched under their feet. Laptops remained opened, class work incomplete. Dried rose petals were strewn on floors caked in blood.

In one unfinished English class assignment, a student had written, “We go to school every day of the week and we take it all for granted. We cry and complain without knowing how lucky we are to be able to learn.” A second-floor hallway featured a James Dean quote: “Dream as if you’ll live forever, live as if you’ll die today.”

The crime scene visit capped 12 days of often gruesome video and autopsy evidence in an agonizing trial in which the jury will decide if Mr. Cruz, 23, who has pleaded guilty, should be sentenced to death or life imprisonment without the possibility of parole. The defense is scheduled to begin its case on Aug. 22. The judge will first hold a hearing without the jury to decide if defense lawyers can use a map of Mr. Cruz’s brain as evidence of the effects of fetal alcohol syndrome.

Before hearing from victims’ families and relatives, the jury listened to 17 survivors who were wounded in the shooting recount how they suffered their injuries and what lingering effects remained from being hit with high-velocity gunshots. Several still have pieces of shrapnel in their bodies.

Benjamin Wikander’s radial nerve was damaged so badly that he still must wear an arm brace. Maddy Wilford has trouble breathing with her right lung. Sam Fuentes suffers from chronic pain and spasms in her legs and no longer has the same range of motion she once did.

But the courtroom felt perhaps most somber as parents, siblings, grandparents and friends found it difficult to stay composed remembering their loved ones and describing life without them. They frequently reached for tissues. A bailiff offered them water.

“I can do this,” Tori Gonzalez, Joaquin Oliver’s girlfriend, said as she took deep breaths on the witness stand. One juror cried when she called Joaquin her soul mate.

“I lost innocence,” she said of the shooting. “I lost purity. I lost the love letters he was writing for me in that fourth-period creative writing class.”

Many relatives spoke about being unable to celebrate birthdays and holidays since the shooting. Peter Wang’s family no longer gathers for Chinese New Year. Luke Hoyer’s mother called Christmas nearly unbearable. Helena Ramsay was killed on her father’s birthday.

Families lamented that they would never see their children graduate from high school or college. Never get to walk them down the aisle. Never rejoice in their having children of their own.

Parents and spouses described their homes as intolerably quiet. “The night no longer brings intimacy and comfort,” said Debra Hixon, the wife of Chris Hixon, the school’s athletic director, “just the loudness of the silence.”

Her son Corey Hixon, who has Kabuki syndrome, a rare genetic disorder, said simply of his father: “I miss him!”

Some people were angry. Alyssa Alhadeff’s father, Dr. Ilan Alhadeff, repeatedly yelled through tears: “This is not normal!” He said his wife “occasionally sprays Alyssa’s perfume just to try and smell her.”

“She even sleeps with Alyssa’s blanket, four years later,” he added.

Some parents have struggled to work. Fred Guttenberg, Jaime Guttenberg’s father, who has become a gun control activist, said he has been unable to hold a normal job and that his public crusade “has made life harder for my wife and harder for my son, and for that, I am sorry.”

The shooting changed his relationship with his son, who was supposed to wait for Jaime and drive her home after school that day. Instead, once Mr. Guttenberg learned of the gunfire, he told his son to flee.

“He struggles with the reality that he could not save his sister, and he wishes it was him,” he said. “He’s angry at me convincing him to run.”

As victim after victim spoke, many people in the courtroom gallery wept. So did several defense lawyers.