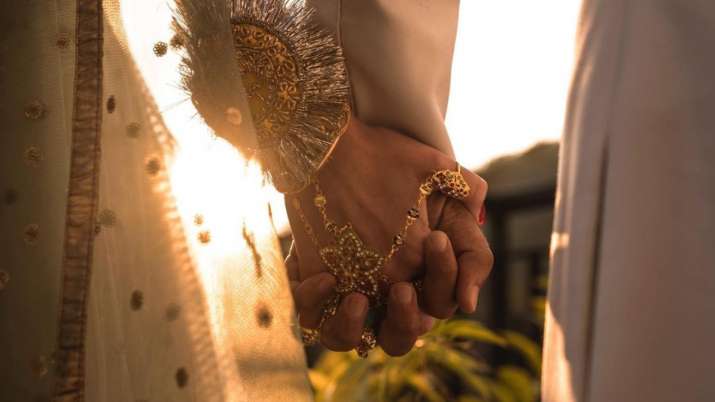 Filmmaker Ali Abbas Zafar started the new year on a happy note, tying the knot. Zafar took to his verified Instagram account to share the news, even though he did not disclose the identity of his wife. Sharing a photograph of his hand holding his newly-wed wife’s hand, Zafar captioned: “Bismillah.” B-Towners commented on the Instagram post sharing congratulatory messages for the director, who is known for helming films like “Tiger Zinda Hai”, “Bharat”, Sultan”, “Mere Brother Ki Dulhan” and “Gunday”.

“Congratulations to you both,” shared Katrina Kaif, Zafar’s heroine in “Tiger Zinda Hai”, “Bharat”, and “Mere Brother Ki Dulhan”, and a family friend.

Zafar is all set to make his digital debut with the nine-part political web series “Tandav”. The series, created and directed by Zafar, features an ensemble cast headlined by Saif Ali Khan, Dimple Kapadia, Tigmanshu Dhulia and Sunil Grover. Zafar has also produced the web show with Himanshu Kishan Mehra.

The director said with “Tandav”, which marks his digital debut, he sensed a liberation, which the big screen could never offer him. “Web is a very liberating space for any filmmaker or storyteller. When you make a film for cinema, you have to tell a story in two hours. There box office decides whether you have made a good or a bad film.

“You are more fearless when you work on web and you can tell stories (of all kinds). My last three film have been with Salman Khan, and with that box office sits like a baggage on your shoulder,” Zafar told reporters.

Set in Delhi, “Tandav” aims to take viewers inside the closed, chaotic corridors of power and uncover the manipulations, charades as well as the dark secrets of people who will go to any lengths in pursuit of power.

“Tandav” brought Zafar closer to his roots as an artiste, said the 38-year-old director. “I have been saying this to myself and my close friends that, when I used to do theatre in college, I would be very happy working on the stage because I was working without any fear and I felt the same on ‘Tandav’.

I felt this is something very honest and true to me.”

The director said his commercial sensibility came in handy while chronicling the universal story of politics and greed.

“Because I have a commercial sensibility, I want the story to reach maximum number of people, (so) I have tried to use that ability to tell a story that’s universal. “

“Politics inherently is universal. You can’t sit on the side. Even being apolitical is taking a political stand. This is not just a story of India but of every country, set-up or dynamics,” he added.

READ more...  It's terrifying and sad: Radhika Apte on scrutiny of OTT platforms