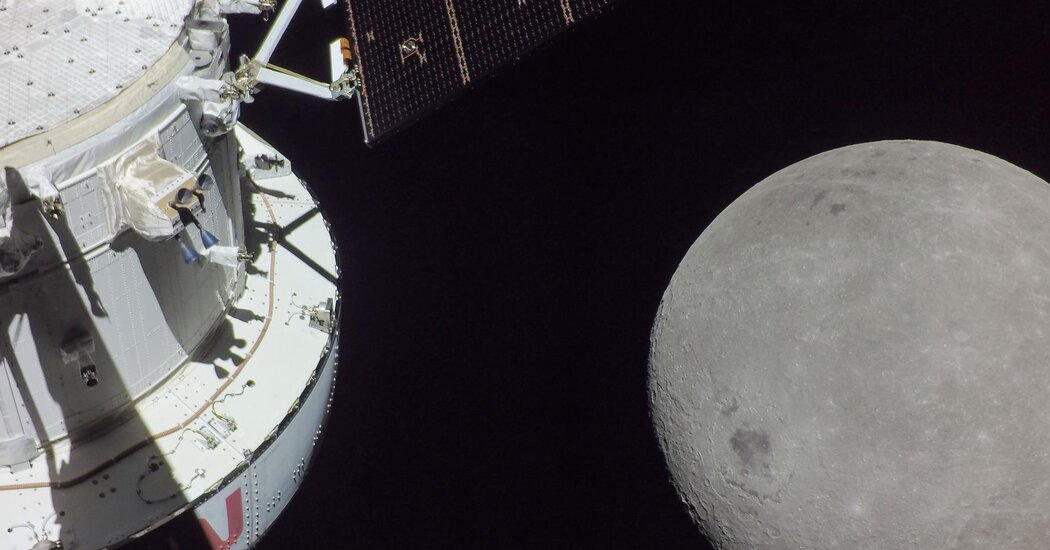 NASA is on a return mission.

Humankind took one small step toward the moon yesterday: NASA’s uncrewed Orion spacecraft arrived at the dusty orb and dipped as close as 81 miles above the surface, part of a multiyear project to return to our closest celestial neighbor half a century after the last visit.

After several delays, NASA’s Artemis program got underway with last week’s launch of Artemis I propelling Orion into the heavens. So far, it has not provided the same drama and romance of the original Apollo moon landings. But for the first time since the astronaut Gene Cernan climbed back into his lunar module as the last person on the moon on Dec. 14, 1972, there is a sustained commitment to going back.

“Why the moon now?” asked my colleague Kenneth Chang, who covers the space program for The Times. “There’s a lot we still don’t know about the moon. Everyone sort of lost interest in the moon for 20 years after Apollo. The moon was like, ‘Oh, we’ve been there, done that, it’s just a rock, no atmosphere, it’s not that interesting.’ Scientifically, what changed is in the ’90s, people started thinking there might be water-ice on the moon. This was a major change in thinking.”

If there is water on the moon, you can split off hydrogen from oxygen and make rocket fuel. Such a prospect would be transformative because the moon could be used as a base for deep-space missions without the cost and burden of lifting heavy rocket fuel off the Earth, which has six times the gravity of the moon. “Scientifically, that’s a cool possibility,” Ken told me, “and so people started getting interested in the moon again.”

To my thinking, Ken has one of the coolest jobs in journalism. He and I spoke yesterday after the Orion flyby.

Peter: Why are we going back to the moon now, and why haven’t we for 50 years?

Ken: We’ve tried at least two times previously. Going back to the moon takes 10 years. Even though technology has gotten better, it’s not something we can do quickly. Every new administration wanted to have its own stamp on space policy, and it got cut. This is the first time the program hasn’t gotten cut in two administration changes. Donald Trump basically continued what was going on under Obama; he changed the initial destination from Mars back to the moon, but it’s still basically the same. And then President Biden hasn’t changed it from Trump, basically.

Artemis I launched Wednesday and reached the moon this morning. This mission is meant to test this new generation of equipment. How is it going?

There have been small glitches, like the star trackers on Orion got confused, so NASA figured out how to work around that. There are small things like that going on, but that’s why they’re flying. If everything went perfectly, they wouldn’t need to do the test. So far, 99 percent of it is going pretty much as they wanted to.

The spacecraft is scheduled to return to Earth on Dec. 11. What else is ahead for this mission before then?

NASA officials want Orion to be out in deep space for a set of time to make sure nothing weird happens from radiation. And the last big thing they want to test is the heat shield. They’re coming back at a really high velocity, and they want to verify that the heat shield survives re-entry.

The next mission, Artemis II, set for 2024, will have a four-person crew fly to the moon but not land. If you’re going all that way, isn’t it frustrating not to touch down?

Yeah, but you want to make sure the life support systems work properly. And secondly, under the plan, the lander won’t be ready by then. It’s really complicated, and you don’t want to risk lives unnecessarily.

The Artemis III mission that will finally put humans again on the surface, including the first woman and first person of color, will be in, what, 2025, if everything goes perfectly? Or is that a stretch?

That’s a huge stretch. Outside experts are saying 2028 would be the earliest. It’s very optimistic that they can get Artemis II off in 2024.

You studied physics at Princeton and later got a master’s in physics, worked at a supercomputing center and were working on a doctorate but gave it up to go into journalism. Why?

I wasn’t that good a physicist. During grad school, I spent one summer at a San Francisco Chronicle program where they had grad students work to improve communication between scientists and journalists, and I realized that was more fun than doing science.

If you could be the first journalist to fly to the moon, would you want to?

I used to. I wanted to become an astronaut, at least for a while. Then I saw “First Man,” the movie about Apollo 11 that showed what the mission was like. I remembered I’m afraid of heights and I’m claustrophobic, so those rockets may not be the best for me.

Related: “I would give it a cautiously optimistic A+,” the Artemis mission manager said about the flight so far.

To visit glaciers in Alaska is to view a landscape painting of the end of the world, Tom Kizzia writes.

The Colorado Springs shooting was both “shocking and entirely predictable,” Michelle Goldberg writes.

Dumpster diving: People on TikTok are digging through trash to shame wastefulness by companies.

“Daddy’s back!” How Disney executives reacted to the return of Bob Iger as C.E.O.

Advice from Wirecutter: Dinnerware for any occasion.

Lives Lived: Bao Tong tried to stop the Chinese government from cracking down on the Tiananmen Square protests and was the highest-ranking official imprisoned over the demonstrations. He later became a critic of the Communist Party. He died at 90.

49ers win abroad: San Francisco looked like a contender last night in Mexico City, walloping the Cardinals, 38-10, in front of a raucous crowd.

Cancellation: Virginia and Virginia Tech agreed to call off their season finale football game this weekend after a shooting this month that killed three Cavalier football players.

Tough draw: The U.S. tied with Wales, 1-1, after the Welsh superstar Gareth Bale scored on a penalty kick.

Rule book: Novice fans don’t understand it. Longtime fans disagree about it. What is offside?

Lineup: Argentina is playing its first match, against Saudi Arabia. This could be Lionel Messi’s final World Cup. Follow today’s other games and updates.

Movement as a memory

“If you pay close attention, you know that no two bodies move the same way,” says Katja Heitmann, a German choreographer. She has been collecting the mannerisms of others — how they walk, stand, kiss or fidget — for her dance project, “Motus Mori.”

Her archive now includes movements “donated” by more than 1,000 people, though she does not record or photograph them; instead, a team of dancers learns the moves in private sessions, commits them to memory and incorporates them into performances. “In our current society, we are trying to capture humanity in data,” Heitmann said. “But we are losing something this way.”

Make this mulligatawny soup in a slow cooker with chicken thighs and tart apple.

The more you prepare now, the more you can enjoy yourself on Thursday. Here are great make-ahead recipes, including sweet potato casserole, biscuits and desserts.

In “Aesthetica,” Allie Rowbottom imagines an ex-influencer who decides to reverse years of plastic surgery.

The pangram from yesterday’s Spelling Bee was boycotted. Here is today’s puzzle.

Correction: Yesterday’s newsletter said incorrectly that the Kansas City Chiefs had 25 straight wins overall. They have 25 consecutive wins in games played during the months of November and December.

P.S. The word “algospeak” — a fun yet dystopian vocabulary meant to skirt content moderation on TikTok — appeared for the first time in The Times recently.

“The Daily” is about three big respiratory viruses.

IndiGo passenger says he is COVID positive; airline offloads him at Delhi airport

In spite of Covid, advancement in abundance within AP: Ministers