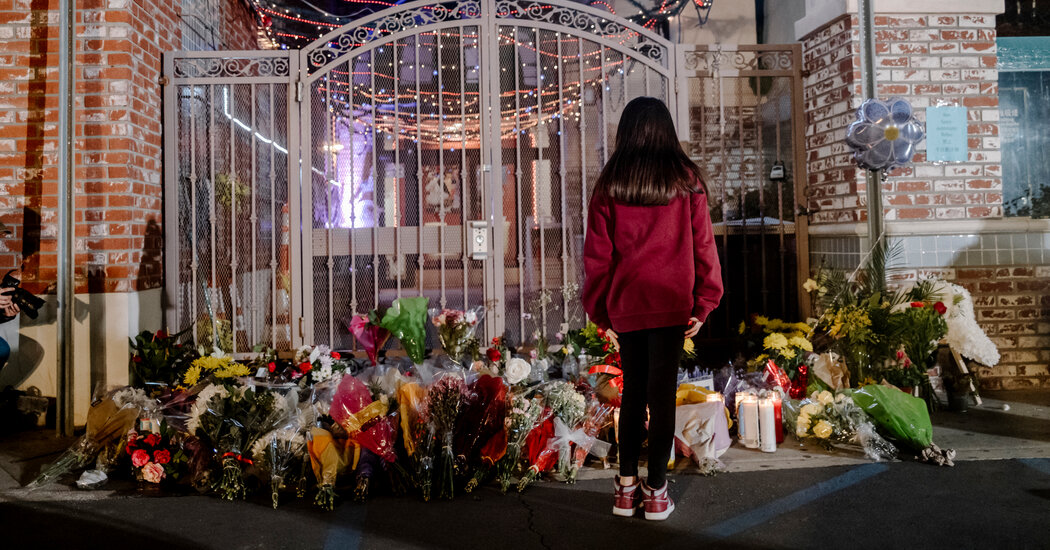 In the first three weeks of 2023, at least 67 people have been killed in mass shootings across the country, including two within days of each other in California.

There was the mass shooting near a youth center in Allentown, Pa., and the one at a Subway restaurant in Durham, N.C. Another took place behind a beer hall in Oklahoma City, and another at a strip club outside Columbus, Ohio. Two mass shootings ended parties in different Florida cities.

And that was just on New Year’s Day.

By the start of the fourth week in January, the tally had grown to include at least 38 separate shootings in which four or more people were injured or killed, according to the Gun Violence Archive, outlining a striking explosion of violence across a range of sites in nearly every corner of the nation that killed at least 67 people.

The deadliest shooting so far took place over the weekend in of Monterey Park, Calif., a city with a thriving Asian American community where a gunman killed 11 people and wounded nine others inside a popular ballroom dance hall. The authorities said the gunman, who may have targeted his victims and who later killed himself, was a 72-year-old man.

Then, on Monday, came another deadly mass shooting in California. A gunman, whom the authorities said was a 67-year-old man, killed seven people and seriously wounded at least one other person in Half Moon Bay, south of San Francisco.

“At the hospital meeting with victims of a mass shooting when I get pulled away to be briefed about another shooting,” Gov. Gavin Newsom of California tweeted on Monday. “Tragedy upon tragedy.”

The frequency of mass shootings and the variety of places in which they now take place — at offices and schools, nail salons and houses of worship, grocery stores and restaurants — contributes to the sense, prevalent across America, that such violence could break out at any moment, anywhere. It fuels calls for gun control just as certainly as it does the purchase of more and more guns. Public shooting sprees rivet the nation, but can also have the effect of normalizing violence.

Criminologists say the prevalence of mass shootings is brought about in part by the easy access to so many weapons — a unique feature of the United States — as well as by a copycat effect.

“Would someone like this have committed a mass shooting at a dance hall in the past?” Adam Lankford, a criminologist at the University of Alabama, said, referring to the older man believed to have been the gunman in Monterey Park. “Maybe not. You can kind of think of it as a snowball effect. The more incidents there are, the more prominent this option will be in angry people’s minds.”

And at the same time, the recurrence of such gun violence risks having the effect of desensitizing the nation to tragedy, so much so that warnings not to become accustomed to high-profile mass shootings are a familiar part of the response.

“We cannot become numb to these horrific acts of violence,” the district attorney of San Francisco, Brooke Jenkins, said after the Monterey Park shooting, which took place amid Lunar New Year celebrations over the weekend. “The year of the Rabbit stands for hope.”

There is little official consensus on what constitutes a mass shooting; different organizations use different measures. But so far this year, the vast majority of the 38 shootings in which at least four people were struck by bullets — the measure used by the Gun Violence Archive, a research group — attracted little to no attention beyond the areas where they took place.

Who outside of Houston would be aware that two such shootings have taken place there this year — a drive-by shooting in which four people were struck; another that killed one person outside a Houston club and involved an AK-47 assault-style rifle.

“It looks like over 50 shots were fired here, which is a very scary situation,” the local sheriff, Ed Gonzalez, told reporters.

Such shootings often make the evening news but fail to pierce the broad consciousness of the cities where they take place, even as they leave victims and bystanders with lasting wounds and mental scars.

“I was terrified — everybody was just running,” Carl Leon, a 25-year-old from Miami, said as he described the moment that gunfire began outside a soul food restaurant in Miami Gardens this month.

Mr. Leon, who promotes musicians on his Instagram account, had just finished appearing as an extra in a video shoot for the rapper French Montana, he said, and was fishing around in his pocket for keys when he was hit. A bullet pierced his left arm and tore through his abdomen.

“I thought I was going to die,” he said. “It was my first time being in a situation like this.”

But the Miami Gardens shooting was not the first mass shooting for his lawyer, Josiah Graham, who represented one of the survivors of a shooting on a Broward County bus last year that killed two people and wounded two others.

It was not even the first mass shooting in the city of Miami Gardens this year. Nine people were injured in a shooting at a party in the early hours of New Year’s Day.

“Back in the day, it used to be if you stay away from certain things, you were good,” said Shanta Bonius, the mother of Carlos Wilkerson, 23, one of the 10 people shot and injured, including Mr. Leon, outside the restaurant in Miami Gardens. “Nowadays you could just be minding your business, going to the grocery store, and something happens. ”

The number of mass shootings has been rising, though not steadily, since 2014, according to data compiled by the Gun Violence Archive, which tracks public reports of shootings. There were 690 shootings with four or more victims in 2021, more than double the 2014 total. The number fell slightly last year, to 647, but remained significantly higher than in previous years.

And the number of such shootings appears to be rising in the first few weeks of this year, as compared with similar periods in recent years. There has been, on average, fewer than one mass shooting per day from Jan. 1 to Jan. 23 in each of the last five years, according to the Gun Violence Archive data, but the last two years have been trending up, to 28 last year from 26 in 2021, and 16 in 2018.

“There is no place left in America that is safe from gun violence,” David Min, a California state senator, said in response to the Monterey Park shooting. “This has to stop. Enough is enough.”

Even as crime rates decline, gun violence is on the rise, said Jaclyn Schildkraut, executive director of the regional gun violence research consortium at the Rockefeller Institute of Government.

But Dr. Schildkraut said it was important to distinguish between “public mass shootings” like those in Monterey Park, which are known to be premeditated, and other categories, like killings among family members, retaliatory gang shootings or shootings that erupt out of an argument.

Public mass shootings are the least common and the most deadly, she said. And the type of policy interventions that are most likely to avert them are different.

“All gun violence and the loss of any one individual is one too many,” Ms. Schildkraut said. “They are different buckets that require us to think about their unique characteristics and add in layers of prevention and response accordingly.”

It is difficult to calculate the precise number of guns sold each year in the United States, because of varying state laws and purchase scenarios. But F.B.I. data on the number of firearm background checks can serve as a measure. By that count, the totals have swelled to 40 million background checks in 2021 from 10 million in 2005.

But subsequent work suggests that the governing factor may be easy access to guns, not ownership of them, said Mr. Lankford, the University of Alabama criminologist, who wrote the 2015 study.

Nearly 40 percent of American men tell researchers that they own a gun, so gun ownership alone is not a useful predictor of who is likely to commit a mass shooting, Mr. Lankford said. In a study of the 14 deadliest mass shootings since Columbine, he and a co-author showed that half of the perpetrators had not acquired their first firearm until the final year before their attack.

In Rockford, Ill., northwest of Chicago, three people died and two others were injured in a shooting this month, and a suspect has yet to be identified publicly.

“You wish there was the same attention that was put on these everyday shootings,” the mayor of Rockford, Tom McNamara, said in an interview.

“I don’t want to sound callous about Monterey Park, but at least those people are going to be remembered,” he added. “Last year I lost 15 lives in my community. There was no national story about it. It’s just sad that we live in a country where violence is normalized.”

Varun Tej tests negative for Covid19: Thank you very much for all the love...

Inside an Animal Sanctuary in Bolivia Where Tourists Can Help