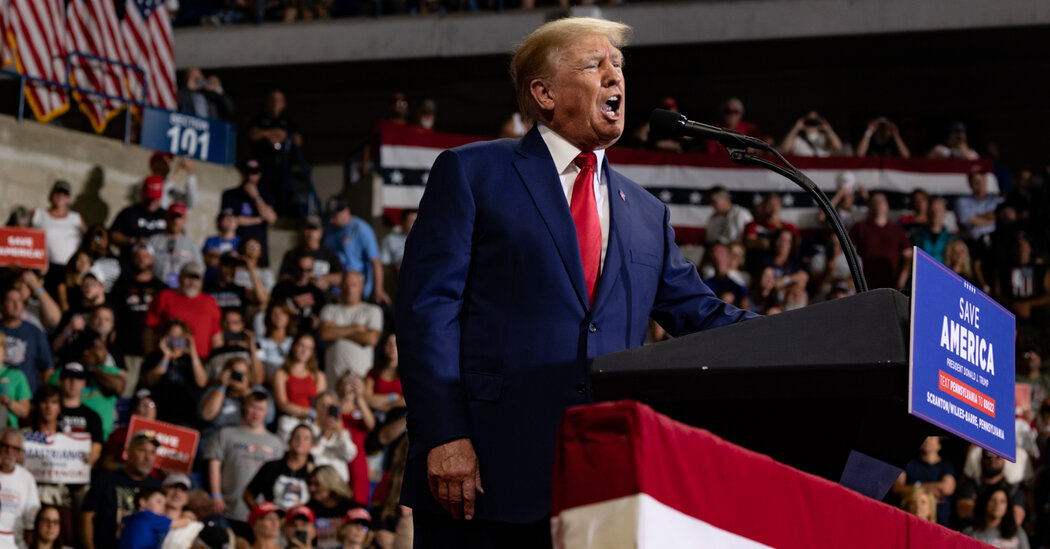 Donald J. Trump and President Biden have both made recent appearances in Pennsylvania, one of the key states in November’s midterm elections.

WILKES-BARRE TOWNSHIP, Pa. — In his first rally since his home was searched by the F.B.I. on Aug. 8, former President Donald J. Trump on Saturday lashed out at President Biden and federal agents, calling his Democratic rival “an enemy of the state” and the F.B.I. and the Department of Justice “vicious monsters.”

In an aggrieved and combative speech in Pennsylvania, Mr. Trump stoked anger against law enforcement even as the F.B.I. and federal officials have faced an increase in threats following the search of Mr. Trump’s residence to retrieve classified documents.

Mr. Trump’s remarks echoed the chain of similar, escalating attacks he wrote on his social media website this week, including posts that singled out one agent by name. That agent has retired, and his lawyers have said he did not have a role in the search.

Although he faced criticism for the tirades, and some Republicans have warned about the political dangers in attacking law enforcement, the former president signaled he would yield no ground.

His speech came two days after Mr. Biden warned that democratic values were under assault by forces loyal to Mr. Trump. The former president described Mr. Biden’s address as “the most vicious, hateful, and divisive speech ever delivered by an American president.”

“You’re all enemies of the state,” Mr. Trump told thousands of supporters at his rally, where he was campaigning for Pennsylvania Republicans, including State Senator Doug Mastriano, the right-wing nominee for governor, and Mehmet Oz, the celebrity television physician and Senate candidate. “He’s an enemy of the state, you want to know the truth,” he said of Mr. Biden.

He told the crowd: “It was not just my home that was raided last month. It was the hopes and dreams of every citizen who I’ve been fighting for.”

Mr. Trump described America as a nation in decline, a theme that has become a staple of his post-White House campaign rallies. In Pennsylvania, he again falsely claimed he won the 2020 election and tailored his speech to highlight a spate of recent murders in Philadelphia.

Mr. Biden has also spent considerable time in Pennsylvania in recent days, underscoring the political significance this year of what may be the nation’s ultimate battleground state. He cast Trumpism as an urgent threat to the nation in Philadelphia, and he also spoke in Wilkes-Barre, near the arena where Mr. Trump appeared. He is expected in Pittsburgh on Monday for a Labor Day appearance.

At the rally, Mr. Trump attacked the two Democratic candidates at the top of the ticket, Josh Shapiro for governor and John Fetterman for senator.

He was particularly brutal and unrestrained in attacking Mr. Fetterman, whom he called a “socialist loser” and accused, with no evidence, of using a laundry list of hard drugs.

Mr. Fetterman’s campaign responded: “More and more lies from Trump and Dr. Oz; another day, but it’s the same crap from these two desperate and sad dudes.”

Soon after, Mr. Fetterman was fund-raising off Mr. Trump’s speech.

Roy Bunger, a 65-year-old Pennsylvanian who attended Mr. Trump’s rally, said before the event that he believed the search of Mr. Trump’s residence was a political ploy.

“They’re deliberately targeting him and doing anything they can to keep him from running again,” Mr. Bunger said.

But other Republicans have been more wary of Mr. Trump’s actions. Earlier this week, Senator Roy Blunt of Missouri said Mr. Trump should have turned the documents over. William P. Barr, who served as attorney general under Mr. Trump, has defended the F.B.I. search.

Court records show that the F.B.I. has collected 18 documents marked as top secret, 54 marked as secret, 31 marked as confidential and 11,179 government documents or photographs without classification markings. According to the court filings, the sensitive, government-owned documents were in containers mixed among news clippings, articles of clothing and gifts.

It was unclear whether more documents remained at Mr. Trump’s property. Federal agents recovered 48 empty folders with classified markings and instructions that the user should “return to staff secretary/military aide,” according to court records.

A Florida judge is considering a request from Mr. Trump’s lawyers to allow an independent arbiter to review the materials taken by federal agents.

UNESCO, Bhumi Pednekar together to educate girls on menstrual hygiene