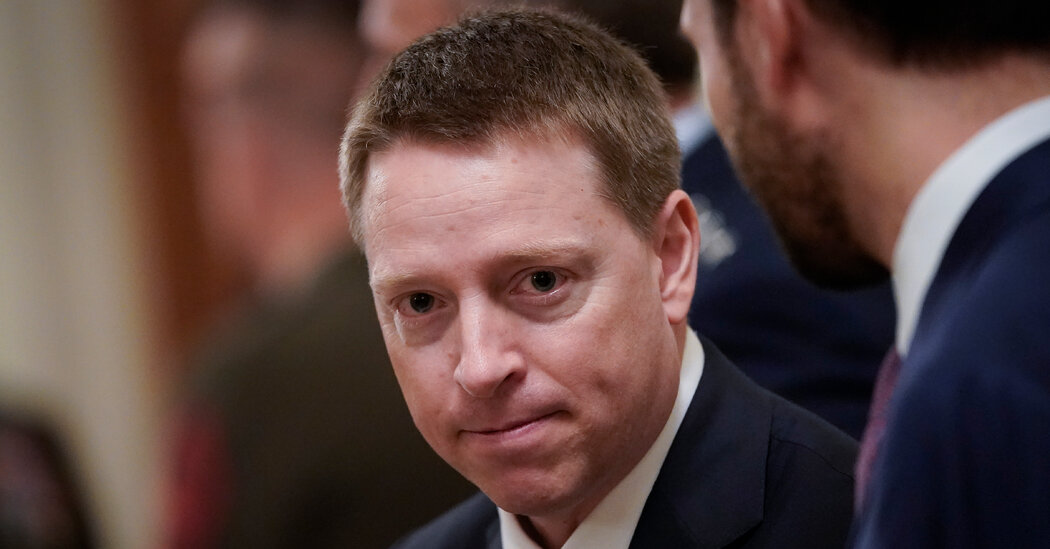 Matthew Pottinger, who resigned on the day of the Capitol riot, is expected to be among those at the prime-time session on Thursday, along with Sarah Matthews, a former deputy press secretary.

Matthew Pottinger, who was deputy national security adviser under President Donald J. Trump and the highest-ranking White House official to resign on Jan. 6, 2021, is expected to testify about that day at the House select committee’s prime-time hearing on Thursday, people familiar with the planning said.

Mr. Pottinger, who was in the White House much of the day of the riot, is one of the live witnesses for the hearing, which is expected to focus on the more than three hours in which Mr. Trump watched the violence unfold without taking any substantial steps to call off his supporters even as they threatened Vice President Mike Pence.

Mr. Pottinger and Sarah Matthews, a former White House deputy press secretary who also resigned on Jan. 6, are expected to help narrate what was unfolding inside the West Wing during those 187 minutes, in a hearing that the committee sees as the capstone to a series of public sessions in which it has laid out in detail Mr. Trump’s efforts to remain in office despite his defeat and how they led to the storming of the Capitol.

The hearing, scheduled for 8 p.m., is expected to give a detailed account of how Mr. Trump resisted multiple pleas from staff members, lawyers and even his own family to call off the attack.

Mr. Pottinger declined to comment. Ms. Matthews and a spokesman for the committee did not respond to requests for comment. Their planned appearances were reported earlier by CNN.

Ms. Matthews is expected to, among other things, speak to the efforts to get Mr. Trump to issue a statement, people familiar with the planning said.

Mr. Pottinger, like Ms. Matthews, has previously given a videotaped interview to the committee, describing what he saw that day. Snippets from both of their interviews have been played at hearings the committee has held in recent weeks.

The committee has said it will use this hearing to lay out Mr. Trump’s “dereliction of duty” that day.

Among the things that Mr. Pottinger discussed with the committee was a visit he made to the Oval Office with the riot well underway sometime after 3 p.m., while Mr. Trump was in the small dining room adjacent to it, according to a person familiar with his interview.

Mr. Pottinger had a short time earlier received a call from Charles Kupperman, a previous deputy national security adviser in the Trump White House, relaying a message he had received from an intermediary saying that the Washington mayor was trying to reach the White House to have the National Guard deployed, according to a former senior White House official.

Mr. Pottinger told the committee that he did not see Mr. Trump, but that he spoke with Mark Meadows, the White House chief of staff, and informed him that a former colleague said the National Guard had still not arrived at the Capitol.

Mr. Pottinger told the committee that a frustrated-seeming Mr. Meadows replied by saying that he had made several calls to a top Pentagon official to get the National Guard sent to Capitol Hill, according to the person familiar with his testimony.

Mr. Pottinger resigned a short time later; he told the committee that he did so after Mr. Trump issued a tweet attacking Mr. Pence as the riot was unfolding. Mr. Pottinger stayed a few hours into the night so he could finish specific work before he departed.

Video of another former White House official, the White House counsel Pat A. Cipollone, is also expected to be used to narrate the day, a third person familiar with the plans said.

Chad’s Military Junta and Rebels Sign a Deal, but a Main Player Is Missing