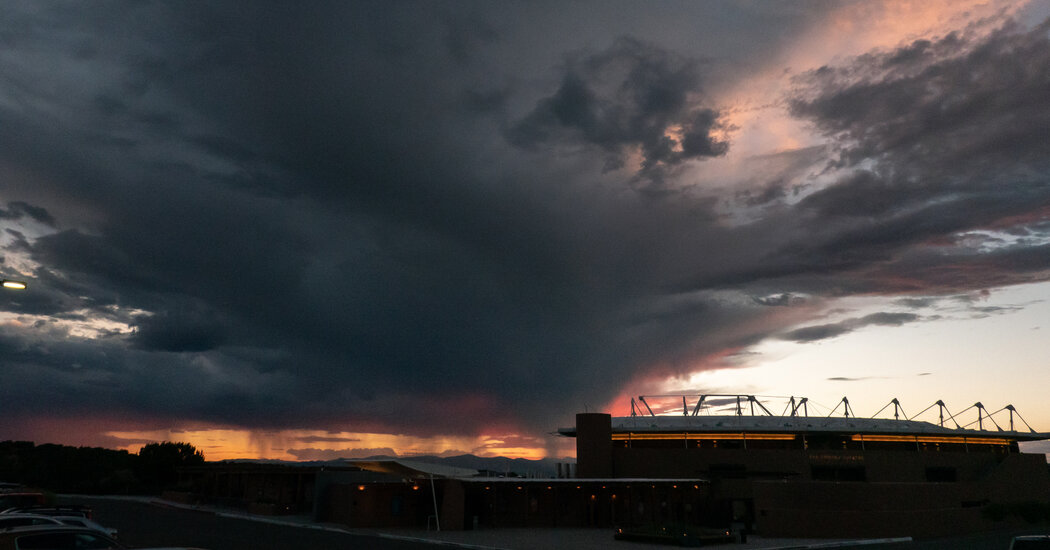 Two women were killed and another person was missing in New Mexico after flash floods swept through an area that had been burned by the state’s largest recorded wildfire, officials said on Friday.

First responders found the bodies on Thursday afternoon in a creek, along with a capsized vehicle, the San Miguel County Sheriff’s Office said in a statement late Friday. The flash flooding occurred in an area east of Santa Fe where the wildfire has burned through hundreds of thousands of acres in recent months.

The New Mexico State Police and other agencies were still searching on Friday for the missing person, who they believe is a man, the statement said. The victims’ identities were not disclosed.

The state police referred questions on Friday night to the San Miguel County Sheriff’s Office, which could not immediately be reached for comment.

Heavy rain continued to fall across the burned area on Friday, state officials said in a news release. In some places, more than an inch of water fell in less than an hour.

A “surge of monsoon moisture” is expected across much of New Mexico on Sunday, and there will be an increased risk of flash flooding through the middle of next week, the National Weather Service office in Albuquerque said on its Facebook page. It warned that burn scars caused by wildfires would be “especially susceptible to runoff, flash flooding and debris flow.”

Wildfires occur throughout the American West every year, but scientists see the influence of climate change in the extreme heat waves that have contributed to the intensity of recent fires.

Wildfires make it easier for even short bursts of heavy rain to cause flooding, because they destroy vegetation and make soil less permeable. A recent study found that in the West, global warming is greatly increasing the likelihood of extreme wildfires being followed by heavy rainfall.

The blaze east of Santa Fe, known as the Calf Canyon/Hermit’s Peak fire, has burned more than 341,000 acres, an area larger than the city of Los Angeles. It was 93 percent contained as of Friday.

The fire is a merger of two smaller ones that started as prescribed burns set by the government. They grew out of control in April, fueled by high winds, and eventually became one of the U.S. Forest Service’s most destructive mistakes in decades.