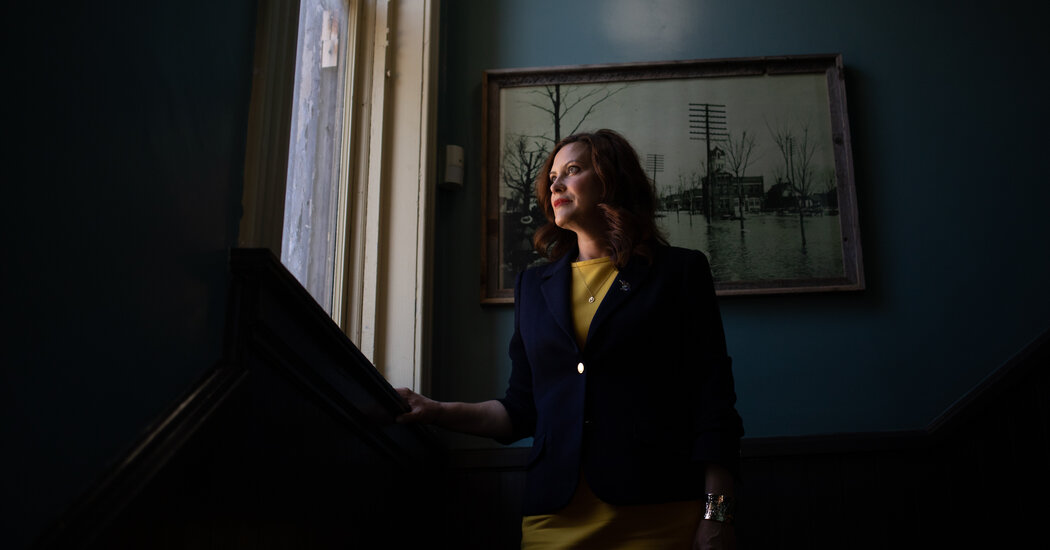 The trial came months after a different federal jury did not return any convictions in the case, one of the country’s highest-profile domestic terror prosecutions.

GRAND RAPIDS, Mich. — The first time federal prosecutors tried to convince a jury that a group of men plotted to kidnap Michigan’s Democratic governor, they failed to get a single conviction. But on Tuesday, jurors in a second trial found the two remaining defendants guilty, providing a measure of vindication to federal law enforcement in a case filled with public setbacks.

Prosecutors described the men, Barry Croft and Adam Fox, as threats to democracy who planned to capture Gov. Gretchen Whitmer at her vacation home in 2020 and instigate a national rebellion. They told jurors how the men went on “reconnaissance missions” to the home, how they accumulated high-powered guns and how they discussed blowing up a bridge to prevent the police from responding to the kidnapping.

The case was seen as indicative of the rising threat of political violence and right-wing domestic terrorism, even before the attack on the U.S. Capitol on Jan. 6, 2021. But proving the charges in Michigan meant persuading jurors to trust a sprawling F.B.I. investigation that included several undercover federal operatives.

In the first trial this spring, jurors acquitted two other men and deadlocked on the charges against Mr. Croft and Mr. Fox. That result, at a time of growing conservative distrust in the F.B.I., raised questions about the bureau’s investigative tactics, especially their prolific use of informants and undercover agents. But even as those issues remained, the verdicts on Tuesday were seen as a warning against political extremism and a sign that the word of an F.B.I. agent can still carry weight with juries.

“I’m hopeful that this verdict will cause people to think twice before they engage in this kind of domestic terrorism,” said Barbara McQuade, who was the top federal prosecutor in Detroit during Barack Obama’s presidency. She called the jury’s decision “an important victory for the rule of law, for democracy and also for those who care about law enforcement.”

When the authorities announced charges against the men just weeks before the 2020 presidential election, the case quickly became one of the highest-profile domestic terrorism prosecutions in recent history. But it also had challenges. One F.B.I. agent on the case was fired last year after being charged with domestic violence, and another agent, who supervised a key informant, tried to build a private security consulting firm based in part on some of his work for the F.B.I., according to a BuzzFeed News report. Jurors did not hear the details of those incidents.

The jury did hear about the array of informants and undercover agents involved in the investigation. The case hinged on the testimony of an informant who became second-in-command of a militia and an undercover agent who offered to provide explosives, whose work prosecutors defended as necessary to understanding what was happening in the group and stopping the men before any attack was carried out. But defense lawyers called that evidence of entrapment.

“In America, the F.B.I. is not supposed to create domestic terrorists so that the F.B.I. can arrest them,” Christopher Gibbons, a lawyer for Mr. Fox, said during closing arguments.

Joshua Blanchard, a lawyer for Mr. Croft, blamed the government for luring his client, a truck driver, from his home in Delaware to events in Midwestern states where a plan was discussed. He told jurors that “this isn’t Russia.”

“They weren’t about to let the truth get in the way of the story they want to tell,” Mr. Blanchard said.

Both men face up to life in prison when they are sentenced.

Like in the first trial, prosecutors described to jurors the weekend training sessions the men attended and the vulgar conversations they had calling for violence, regularly playing incendiary audio clips that informants had surreptitiously recorded. And like in the first trial, prosecutors called Ty Garbin and Kaleb Franks, two former defendants who pleaded guilty to kidnapping conspiracy, to the witness stand.

But in a departure from their approach at the earlier trial, prosecutors focused at length on statements supporting political violence that Mr. Croft and Mr. Fox had made long before F.B.I. agents got involved, an attempt to undercut defense lawyers’ claims of a federal setup. Even before they became focused on Ms. Whitmer, prosecutors said, Mr. Croft was musing online about hanging a governor.

“How could they possibly be entrapped?” Nils Kessler, a federal prosecutor, said during closing arguments. “They were obviously predisposed.”

The trial this month took place in an even more charged political environment than the last one, with Ms. Whitmer campaigning for re-election and F.B.I. agents searching former President Donald J. Trump’s Florida home during the week of opening arguments. Many conservatives denounced that search as a weaponization of the Justice Department and an example of F.B.I. overreach.

Mr. Trump, who was president when the F.B.I. arrested Mr. Croft and Mr. Fox, has personally cast doubt on the prosecution. In a recent speech at a conservative conference, he appeared to allude to the Michigan case, calling it “fake” and saying “Gretchen Whitmer was in less danger than the people in this room right now, it seems to me.”

On Tuesday, Ms. Whitmer said the verdicts showed “that violence and threats have no place in our politics and those who seek to divide us will be held accountable.”

“But,” she added, “we must also take a hard look at the status of our politics. Plots against public officials and threats to the F.B.I. are a disturbing extension of radicalized domestic terrorism that festers in our nation, threatening the very foundation of our republic.”

When the guilty verdicts were read late Tuesday morning at the federal courthouse in downtown Grand Rapids, neither Mr. Croft nor Mr. Fox had a visible reaction. One woman on the jury spoke in a strained voice when asked to confirm her verdict, and later wiped her eyes. As the defendants were led away in handcuffs and leg shackles, a woman in the courtroom gallery yelled out, “I love you, Adam.”

Within minutes of the verdicts, appeals appeared all but inevitable. Defense lawyers, whose complaints during trial about being given time limits for cross-examination were detailed in the local media, also raised questions about the jury. The lawyers said that a ruling from the judge in the case, Robert J. Jonker, prevented them from discussing those jury concerns in detail.

Early in the trial, The Detroit News reported that a document that Mr. Blanchard filed included claims that one juror told co-workers about wanting to be on the jury and of having already reached a conclusion about the case. The motion was sealed by court staff, and Judge Jonker rejected an attempt by Mr. Blanchard after the verdict to make that document public again.

Later on Tuesday, Judge Jonker ordered that Mr. Blanchard’s original brief on the juror be unsealed. The judge also made public an order saying he had investigated the misconduct claims and determined that the juror could continue serving.

Outside the courthouse, David Porter, an assistant special agent in charge for the F.B.I.’s Detroit office, said the verdicts showed that threatening or carrying out political violence remained unacceptable, and that the bureau “will continue to investigate anyone who seeks violence in furtherance of ideology.”

Still, there were lessons for federal law enforcement from the case, said Matthew Schneider, who served as the top federal prosecutor in Eastern Michigan during Mr. Trump’s presidency, and who said he was involved in the early stages of the kidnapping plot investigation. Among those lessons: Agents perhaps moved in too early to arrest the men, before any date to commit the kidnapping had been set.

“The government should not be resting on its laurels or taking some kind of victory lap here,” said Mr. Schneider, now a partner at Honigman LLP in Detroit. “There’s a lot to learn from this prosecution about how to handle cases like this in the future.”

But given the political backdrop and the result of the first trial, the convictions were welcomed by some as a sign the system still works. Mark Chutkow, who worked for more than 20 years as a federal prosecutor and is now a partner at the Dykema law firm, said “it shows that you can continue to prosecute a case like this even in a polarized society.”

Special Ops 1.5 actor Aadil Khan keeps up with Mumbai heat, check out his...