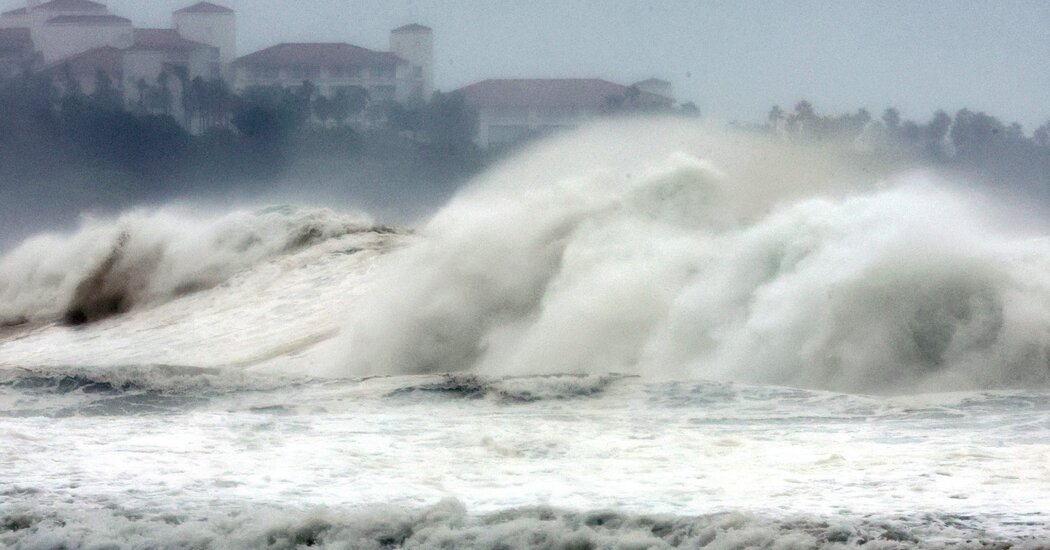 The storm, expected to make landfall on Tuesday, could be the strongest in the country’s recorded history. Japan and China were also making preparations.

SEOUL — Just weeks after record-setting rainfall brought deadly floods to South Korea’s capital, the country was bracing on Monday for Typhoon Hinnamnor, which forecasts indicated could be the strongest storm to make landfall in its recorded history.

Preparations were also underway in China, where heavy rain fell in Shanghai on Monday morning, and in Japan. The typhoon was expected to bring powerful winds and rain to the western Japanese island of Kyushu as soon as Monday night.

At 5 a.m. Monday, Hinnamnor was 342 miles south-southwest of the South Korean island of Jeju, according to the Korea Meteorological Association. It was moving north, with maximum sustained winds of about 110 miles per hour, and was expected to make landfall around 9 a.m. Tuesday, 56 miles southwest of the port city of Busan.

Parts of Jeju were expected to get more than 24 inches of rain. The meteorological agency predicted rainfall of 4 to 12 inches nationwide and winds as strong as 134 miles an hour. On Sunday, the government issued its highest-level typhoon warning.

Numerous flights and ferry services have been canceled. President Yoon Suk-yeol called for a “quick response in the case of damage.”

The flooding in Seoul last month, which killed at least nine people, came as nearly 17 inches of rain fell in about a day. The typhoon was expected to bring as much as 12 inches of rain to the Seoul area on Tuesday.

In 2002, Typhoon Rusa swept across the nation, leaving dozens dead in its wake and destroying over a million homes. The following year Typhoon Maemi killed more than 100 people and cost the nation $1.6 billion in damages. Local news outlets are predicting Hinnamnor to be as powerful as Rusa and Maemi.

The storm’s eye has gained speed as it travels across the northwest Pacific, prompting forecasters to say it could spend less time than previously expected over South Korea, reducing the amount of time it could cause damage.

On Kyushu island in Japan, the authorities in Nagasaki prefecture recommended that 57,000 households evacuate. Some schools on the island announced that they would be closed, and some planes, trains and ferries suspended service. The Japanese Meteorological Agency advised people there to be on the alert for high waves, landslides and flooding, and to be prepared for high winds and tornadoes.

In China, coastal regions were making extensive preparations, even though the typhoon was well out to sea. Zhejiang Province, just south of Shanghai, said it had evacuated more than 310,000 people. Shanghai turned off decorative lights along its historic Bund, halted river ferry services and began extra safety monitoring of its subway system.

China routinely takes extensive preparations in response to typhoons, often forcing large numbers of people from their homes whether they want to leave or not. The national government has a history of harshly punishing local officials if typhoon injuries or deaths occur in their areas of responsibility, giving them incentive to take measures that are sometimes extreme.

The terms typhoon, hurricane and cyclone all refer to tropical cyclones; the term applied to a given storm depends on where it originates. Typhoons develop in the northwestern Pacific and usually affect Asia. Hurricanes form in the North Atlantic, the northeastern Pacific, the Caribbean Sea or the Gulf of Mexico.

In the Atlantic, major hurricanes are defined as tropical cyclones with maximum sustained winds of 111 m.p.h. or higher, and defined as either Category 3, 4 and 5 storms. But in the Asia Pacific region, there are variations in how individual countries grade typhoons.

The links between tropical storms and climate change are becoming more apparent. Although warming might not lead to more such storms, researchers have found that it has increased the frequency of major ones because a warmer ocean provides more of the energy that fuels them.

Hinnamnor formed in the Pacific at the end of an unusually quiet August for storms in the Atlantic. But on Friday in the North Atlantic, Tropical Storm Danielle strengthened into a hurricane, the first of the season. Hours later, Tropical Storm Earl formed east of the Northern Leeward Islands, becoming the season’s fifth named storm.

‘Damad not a trademark of Indian National Congress’: Sitharaman’s swipe at Congress in Rajya...

Was replaced by A-list actor in film without being informed: Harleen Sethi