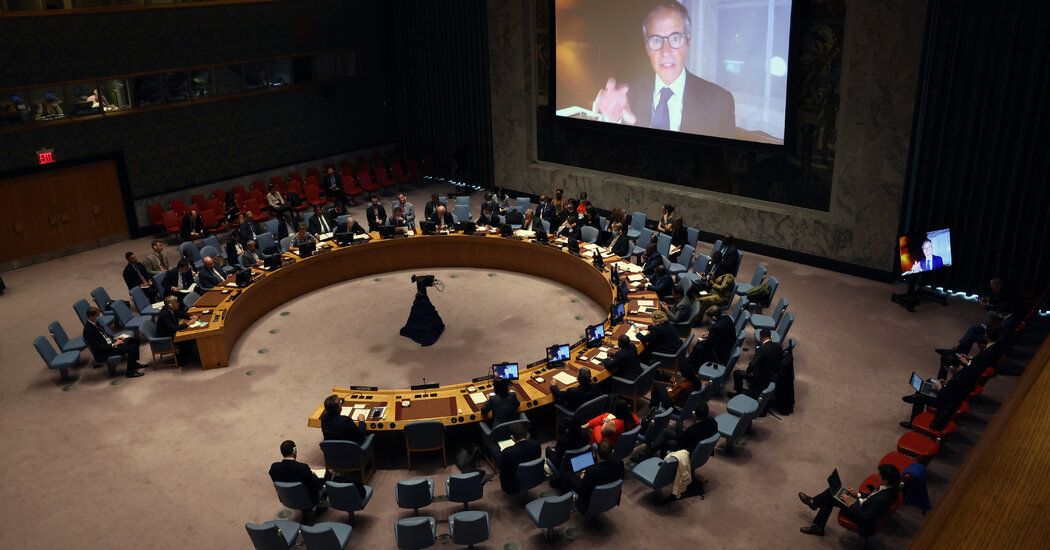 In a highly anticipated report, nuclear experts who crossed a battlefield to inspect Europe’s largest nuclear plant called for Russia and Ukraine to halt all military activity around the complex.

The United Nations’ nuclear watchdog on Tuesday called for a no-fire zone around an embattled Ukrainian nuclear generator, but like the plant itself, the agency was quickly caught up in the war between Russia and Ukraine.

In a highly anticipated report, nuclear inspectors who had to wend their way through the battlefield to get to the plant said they were “gravely concerned” about conditions there.

“We are playing with fire, and something very very catastrophic could take place,” Rafael Mariano Grossi, the U.N. official who led the inspectors, said in an address to the Security Council on Tuesday afternoon.

Occupied by Russian forces just after they invaded Ukraine in March, the Zaporizhzhia nuclear complex has been limping along for months, its vital cooling systems at risk, its power lines degraded and its Ukrainian workers struggling to do their jobs as shells rain down.

On Tuesday, the inspectors reported having found Russian military equipment parked inside buildings, as well as damage to buildings housing fresh nuclear fuel and radioactive waste. Plant operators, they said, were being denied access to some parts of the facility, including the cooling ponds. And even the on-site emergency center has been compromised, and is now being used by Russian military personnel, the inspectors said.

For Europeans alarmed at the prospect of a Chernobyl-like nuclear disaster in the heart of the continent, the visit by the inspectors from the International Atomic Energy Agency and the report that resulted made it only clearer that there is little the world is able — or willing — to do. Not only is the agency powerless to stop the fighting around the plant, the shelling persisted even while they were there, at one point forcing inspectors to take cover.

The team of inspectors, who arrived in Zaporizhzhia on Aug. 29, urged in their report for shelling to be “stopped immediately.”

“While the ongoing shelling has not yet triggered a nuclear emergency,” they said, “it continues to represent a constant threat to nuclear safety and security with potential impact on critical safety functions.”

Even before the report was issued, some Ukrainian officials were faulting the inspectors for appearing unwilling to blame Russia for the shelling. On Tuesday, a Russian-installed local official in Zaporizhzhia offered a mirror version of the same criticism.

“It is very sad the I.A.E.A. lacked the courage to call a spade a spade, and to state clearly where the power plant and its environs were bombarded from,” said Vladimir Rogov, an official in the Russian Army’s occupation administration. “What is being stated today is sad, almost pessimistic.”

Edwin Lyman, a nuclear power expert at the Union of Concerned Scientists in Cambridge, Mass., said it was unreasonable to expect the nuclear inspectors to point a finger at who is responsible for the fighting around the plant.

“They don’t have the expertise to identify the source of the ordinance,” he said. “That is not what they are there to do.”

Beyond that, as a U.N. agency, the I.A.E.A. is on some level a political agency, and lacking in authority.

“They are treading on thin ice here,” Mr. Lyman said. “They depend on the good graces of the occupiers to do this at all.”

On Tuesday, the nuclear agency said it was prepared to start consultations with both sides in the conflict over a security zone around the plant. Speaking at the United Nations, Secretary General António Guterres said, “As a first step, Russian and Ukrainian forces must commit not to engage in any military activity toward the plant site or from the plant site.”

The nuclear agency has left two inspectors at the plant to monitor conditions, a step that Russia’s U.N. ambassador, Vasily Nebenzya, said his government welcomed. He told the Security Council on Tuesday that the visit made clear that the plant “is functioning normally and there are no internal threats.” The real danger, he claimed, is from “shelling by the Ukrainian armed forces.”

He did not describe Russia’s position on the proposals in the U.N. report, such as the creation of a security zone. “We’ll need additional time to study the document, therefore I’m not going to dwell on it in detail,” he said.

Ukrainian officials have maintained that the clearest and safest solution is for Russian forces to leave the complex.

“The visit was the first step only,” Ukraine’s ambassador to the United Nations, Sergiy Kyslytsya, told the Security Council on Tuesday. He said, “The only way to ultimately remove the nuclear threats stemming from the illegal Russian presence at the plant is the withdrawal of the Russian weaponry and troops.”

President Volodymyr Zelensky of Ukraine, in his nightly address on Tuesday, called for the I.A.E.A. to be given the power to “force Russia to demilitarize the territory” around the plant and return control of it to Ukraine. He said the world needed “adequate means” to compel Russia to do so, but did not describe what that might entail.

Mr. Kyslytsya denied that Ukraine had ever “resorted to forceful military actions” in relation to the plant.

But for weeks fighting around the plant, the largest nuclear facility in Europe, has raised fears of a nuclear accident. The Ukrainian engineers who are working there are under duress, according to Ukrainian officials. The U.N. report said that the workers were under “constant high stress and pressure,” and that the situation was “not sustainable.”

On Monday, after shelling started a fire on the grounds of the complex, the plant was disconnected from the power grid. That means that the cooling systems that keep the reactors from melting down are at risk of relying solely on emergency backup power, Ukraine’s energy minister said.

Reactor No. 6, the only working reactor at the plant, was still producing power for the facility itself. As of Monday evening, engineers had not switched on diesel generators, according to an official from Energoatom, the Ukrainian company responsible for operating the facility.

Even as the nuclear monitoring agency prepared to release its report, artillery shelling continued in the area around the Zaporizhzhia plant. The Ukrainian military said that rocket volleys struck the town of Nikopol, across the Dnipro River from the plant, damaging apartment buildings and private homes and knocking out power to some neighborhoods. There were no reports of casualties.

Across the river in the city of Enerhodar, which is home to many employees of the nuclear station, residents reported hearing a powerful explosion early Tuesday, Enerhodar’s mayor, Dmytro Orlov, said in a post on social media.

For weeks, people living near the station, in both Ukrainian-controlled and Russian-controlled territory, have been fleeing, or trying to. The roads for evacuating from the Russian occupied zone into Ukrainian-held territory — the same route the nuclear inspectors traveled to reach the station — have been perilous because of artillery shelling.

On Tuesday, a Ukrainian deputy prime minister, Iryna Vereshchuk, said that Ukraine had proposed a humanitarian corridor, where both sides would cease artillery strikes, to ease escape from the area, but that Russia had refused.

Who should not get Covaxin? Bharat Biotech issues fact sheet, warns of possible side...