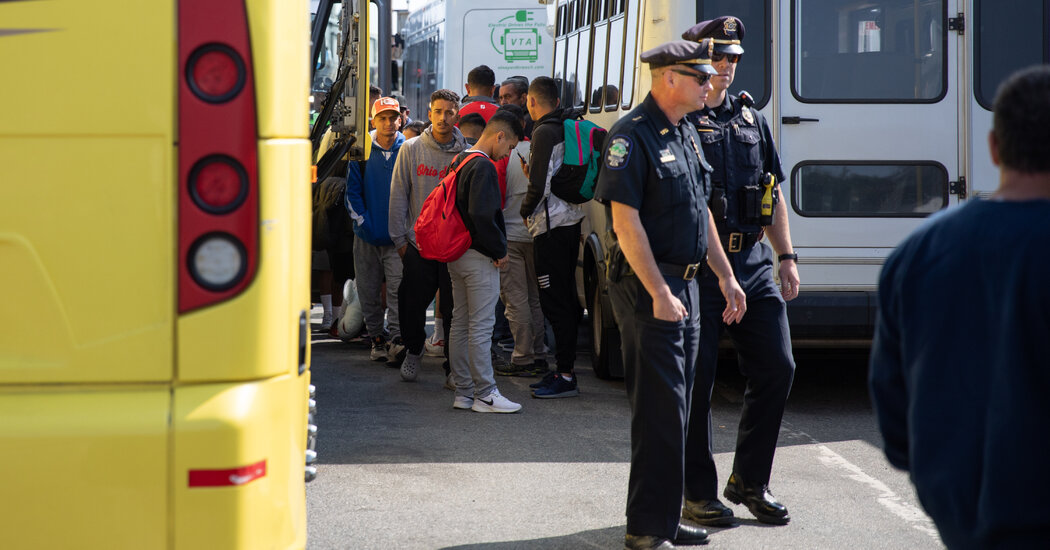 More than a fifth of Venezuela’s population has fled the country, and critics said the move by Republican governors to ship migrants to other states would not dissuade others from leaving.

MARACAIBO, Venezuela — When Ana Villalobos heard that a group of Venezuelan migrants were at the center of a mushrooming political controversy in the United States, her reaction was swift and anguished.

Just days ago, her daughter had left this crisis-battered city and headed north with 40 others, some of them children and pregnant women, determined to cross the Darién Gap, a notoriously dangerous path straddling Panama and Colombia, in a quest to reach the United States.

Then Ms. Villalobos learned Republican governors have been shipping newly arrived migrants like her daughter to other states.

“We Venezuelans have suffered so much, for them to treat us that way,” she said.

Still, the reaction among Latin America officials has been largely muted so far to the latest moves by Gov. Ron DeSantis of Florida, who sent two planeloads of migrants to Martha’s Vineyard, and Gov. Greg Abbott of Texas, who sent two busloads to the Washington residence of Vice President Kamala Harris.

The governors’ decisions have been their most high-profile efforts to challenge President Biden’s immigration policies and to highlight the record number of migrants arriving at the southern border, for which they hold Democrats responsible.

Some of those in Latin America who have spoken out have accused Mr. DeSantis and Mr. Abbott of being largely out of touch with the crisis on the ground in Venezuela — and even of being hypocritical, given how harshly Republicans have criticized the Venezuelan government of Nicolás Maduro, whom they blame for the crisis.

Arturo Sarukhan, a former Mexican ambassador to the United States, wrote on Twitter that Mr. DeSantis was using the migrants as “political props,” which he called “disgusting and so reprehensible.”

“That many of these were Venezuelans simply disproves the alleged concern GOP politicians in FL profess to have for democracy and human rights” in Latin America, he wrote.

Mr. Maduro has not said anything publicly about the shipment of migrants or the growing political fallout in the United States.

More on Ron DeSantis and His Administration

On Friday, a lawmaker in Colombia, Karmen Ramírez Boscán, who represents Colombians living abroad in Congress, said elected leaders in the United States were wrong to use “people’s pain and suffering for political gain.”

“Migration is not a weapon for politics,” she added in an interview.

Before the latest movement of migrants out of Florida and Texas, other leaders in Latin America had lashed out more broadly at the treatment of undocumented migrants by the United States.

“Since there are elections in November, then they’re looking for sensationalism, for scandal,” Mr. López Obrador said at a news conference in July. “We don’t appreciate that there are anti-immigrant campaigns for electoral purposes, I consider it immoral.”

In Maracaibo, a city in a once flourishing oil-rich state in western Venezuela, Ms. Villalobos, 53, said her daughter, a high school graduate, left because her two jobs, selling clothing and working at a restaurant, did not earn the family “even enough to buy food for a week.”

“We’re five people here, two are elderly, and a child, and we are desperate,” Ms. Villalobos said.

She had not heard from her daughter for days.

A neighbor of hers, Zulay Chirinos, had a friend in the same group that had left to try to make it to the United States. That friend, 21, was four months pregnant, Ms. Chirinos added.

“They ask me: Why risk it?” she said. “She risked it because it’s a choice between dying on the route, or dying here.”

The migrants being sent across the United States by the governors are a small part of an extraordinary crisis unfolding farther south. Since 2013, millions of Venezuelans have fled an economic, social and democratic crisis overseen by the country’s leftist government, one that economists have called the worst outside of war in decades.

Many of those migrants fled to other nations in South America. But as the pandemic has battered South American economies, many Venezuelans are now headed north.

An estimated 6.8 million Venezuelans, more than a fifth of the population, have left the country, the largest international displacement in the hemisphere’s history.

The United States has tried to stanch the flow by supporting a visa program that allows Venezuelans to live and work in Colombia. But that has had only a limited effect.

Last year, foot crossings of the Darién Gap, which connects South and Central America, hit a record, jumping from fewer than 10,000 in 2020 to more than 130,000 people, according to Panamanian officials.

This year, crossings through the brutal jungle path are on track to break that record, and the vast majority of the migrants are Venezuelan.

Daniel Cooper Bermúdez, the director of Hearts on Venezuela, an organization meant to create awareness of the country’s humanitarian situation, said that U.S. politicians were using Venezuelan migrants “as a political maneuver.”

“In a country that claims to be a representative of freedom and a promoter of human rights for the population, there should be coherence inside and outside Venezuela,” he said.

And in Maracaibo, several people said that the migration flow would only continue given the dire situation in Venezuela that shows no signs of abating.

Two bricklayers in the city, a father and a son, left for the United States on Friday.

Yudi, the wife and mother of the bricklayers, said they had left because they could no longer afford to buy food. (Yudi, fearful that sharing her story would cause her family to be deported if they made it to the United States, asked that only her first name be used.)

“We are afraid of what might happen to them, but nothing of what they were paid for their work was enough for anything,” she said. “Sometimes you have to take risks.”

China Regroups to Snuff Out a Wave of Protests

House Hunting in Panama: A Tuscan-Style Villa in the Hills of Boquete