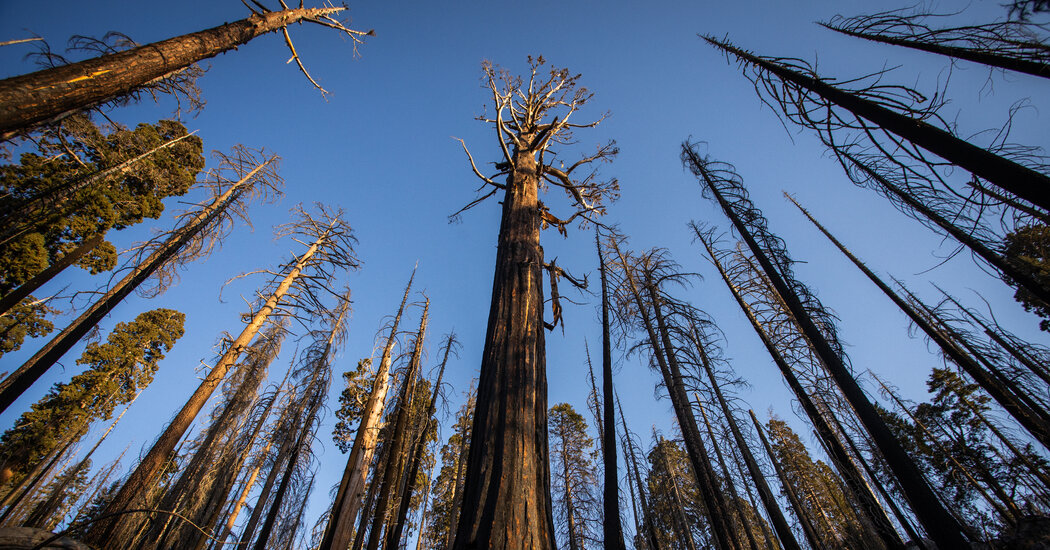 The U.S. Forest Service will expedite plans to clear brush that fuels fires and take other measures to protect the centuries-old trees.

The U.S. Forest Service said on Friday that it would take emergency action, including removing low-lying vegetation that can fuel fires and other measures, to protect giant sequoia groves that are threatened by wildfires.

Since 2015, wildfires have ravaged the groves in California. About one-fifth of all giant sequoias have been destroyed over the past two years, the Forest Service said.

All but five of the 37 groves have been at least partially burned in recent wildfires. Numerous giant monarchs, the largest sequoias in the grove, have been killed. Experts estimated in 2021 that there were about 75,000 giant sequoias left.

“Without urgent action, wildfires could eliminate countless more iconic giant sequoias,” said Randy Moore, the chief of the Forest Service. “We can and must do more to protect giant sequoias using all the tools and flexibilities available to us. This emergency action to reduce fuels before a wildfire occurs will protect unburned giant sequoia groves from the risks of high-severity wildfires.”

The Forest Service said that it hopes to finish the prevention projects by 2023 or 2024.

The plan, which involves removing ladder fuels, or needles, grass and moss that can spread fires, along with the hand-cutting of small trees, would help protect 12 giant sequoia groves that encompass more than 13,300 acres. Other measures to be taken include mechanically removing some trees, pulling decayed materials away from the base of the giant sequoias and setting controlled fires.

To protect the Sequoia National Forest’s nearly 12,000 acres will cost about $15 million, which will come from the recently enacted infrastructure law. Work on eight groves could start this summer, the Forest Service said, and work on three other groves could begin by fall.

“The giant sequoia groves are a California icon, but tragically, nearly 20 percent of all mature giant sequoias have burned in the last five years,” the senators wrote in a joint statement. “We must do all we can to protect these trees, many of which are thousands of years old, from the threat of wildfire.”

Giant sequoias are usually unscathed by flames. Their thick, fibrous bark and branches high in the sky often safeguard them from heat damage. But in recent years, wildfires have become far more destructive to the trees, which grow on the western slopes of the Sierra Nevada, the National Park Service said.

Between 2015 and 2021, more than 85 percent of the acreage of all giant sequoia groves across the Sierra Nevada burned in wildfires, compared with 25 percent in the previous century, the Park Service said. The uptick in damage is likely related to climate change, the service said, and a lack of frequent fires that might clear out brush.

The authorities and firefighters this month were taking measures to help save a famous giant sequoia tree in Yosemite National Park known as the Grizzly Giant, which is more than 2,000 years old and 200 feet tall.

The tree was threatened by the Washburn fire, which led to evacuation orders for Wawona, Calif., and has burned more than 4,800 acres. That fire was 79 percent contained as of Saturday afternoon, fire officials said.

To help protect the Grizzly Giant, the authorities cleared debris from the base of the tree, cut down smaller trees and set up a sprinkler system that intermittently pumped up to 20 gallons of water per minute to help increase humidity at the base of the tree.

In other recent fires, firefighters have wrapped the trees in a flame-retardant foil, pumped foam onto them and showered them in pink fire retardant.

Firefighters were also battling a wildfire near Yosemite National Park that destroyed 10 structures overnight on Friday and threatened 2,000 more, the authorities said.