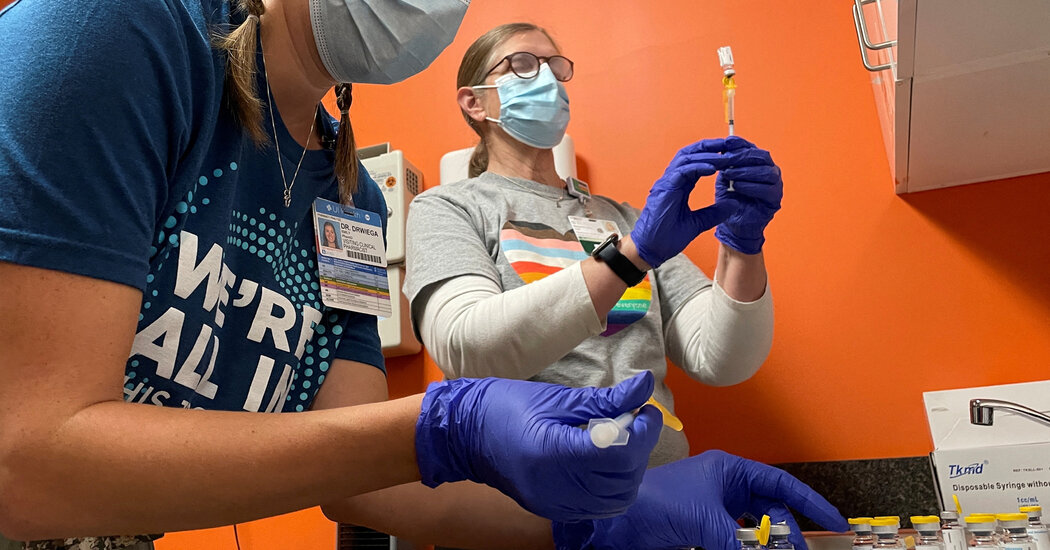 The doses were withheld pending an F.D.A. review, which has now been completed.

Easing a shortfall that has plagued the fight against monkeypox for weeks, the Food and Drug Administration announced on Wednesday that it had cleared nearly 800,000 additional doses of vaccine for use. The Biden administration said it would announce allocations for states and jurisdictions on Thursday.

The new doses should greatly expand the supply in the United States, but some experts questioned whether they would be enough to meet the demand. Since May, the country has confirmed 3,600 cases, among the highest tallies in the world, and the figure is almost certainly an underestimate.

Stores of Jynneos, the monkeypox vaccine, have been constrained since the start of the outbreak. The vaccine is made by Bavarian Nordic, a small company in Denmark.

Although federal agencies helped develop Jynneos, the strategic national stockpile held just a few thousand doses when the outbreak began, and the Biden administration has moved slowly in acquiring more.

American officials have now ordered nearly seven million doses, which will arrive in batches over the next months. So far, the administration has shipped about 320,000 doses to states.

The F.D.A. said on Wednesday that it had completed an inspection of Bavarian Nordic’s manufacturing plant in Denmark earlier this month and had determined that the vaccine produced there met its standards.

Given the rising need, the agency said it had “facilitated the shipment of manufactured doses” to the United States, but declined to say whether the doses had arrived in the country.

“Aggressively responding to the monkeypox outbreak is a critical priority,” Xavier Becerra, secretary of the Department of Health and Human Services, said in a statement.

“H.H.S. is working to make these doses available to states and jurisdictions as soon as possible to fulfill their needs and will announce allocations tomorrow,” he added.

Assuming the doses are quickly distributed, they should ease at least some of the shortages. The supply now is “probably sufficient to meet the most pressing need,” said Tinglong Dai, an expert in vaccine supply at Johns Hopkins University.

What is monkeypox? Monkeypox is a virus similar to smallpox, but symptoms are less severe. It was discovered in 1958, after outbreaks occurred in monkeys kept for research. The virus was primarily found in parts of Central and West Africa, but in recent weeks it has spread to dozens of countries and infected tens of thousands of people, overwhelmingly men who have sex with men. On July 23, the World Health Organization declared monkeypox a global health emergency.

Who can get the vaccine? Jynneos vaccine is most commonly used to prevent monkeypox infections, and consists of two doses given four weeks apart. It  has mostly been offered to health care workers and people who have had a confirmed or suspected monkeypox exposure due to limited supplies, though new doses should become available in the coming months. A few states, including New York, have also made vaccines available among higher-risk populations.

“I hope it alleviates the burning anxiety that thousands of people have been experiencing in recent weeks,” he added.

Bavarian Nordic has fewer than five million doses in hand, in addition to the two million it is supplying to the United States by the end of the year. A manufacturing facility that could make more has been shut for a planned expansion since last August.

But more vaccine doses will be needed, as several cities have expanded their criteria for immunization against monkeypox to include sex workers, patients of sexual health clinics, clinicians and other staff members who may be exposed to the virus at work.

Men who have sex with men comprise 99 percent of the cases so far. The United States has identified 13 women who were infected, including one pregnant woman who has since delivered a healthy baby, and two young children.

But as awareness and access to testing grow, the number of people who line up for the vaccine may also spike. “I fear it’s too little” to meet that demand, Dr. Dai said of the new supply.

Activists said that the F.D.A. failed to move quickly to inspect the manufacturing facilities in Denmark and that it was not doing enough to explore other manufacturing options in the United States.

The agency denied those accusations.

“There was no delay in the inspection of the Bavarian Nordic plant,” said Abigail Capobianco, a spokeswoman for the F.D.A.

But James Krellenstein, co-founder and a managing director of the advocacy group PrEP4All, noted that the European Medicines Agency had inspected and approved the facility last year.

“We missed months of time in which these doses could have been used to slow or stem this outbreak,” he said. “There was no scientific or medical justification for doing so.”

Jynneos is supposed to be given in two doses delivered 28 days apart. Laboring to protect residents with scant supplies, some jurisdictions — including Colorado, San Francisco, Washington, D.C., and New York City — have decided to defer second doses until the supply opens up, a strategy also employed in Britain and Canada.

Studies by Bavarian Nordic suggest that a single shot of Jynneos produces an immune response comparable to that of the earlier smallpox vaccine and should be protective, although immunity seems to begin declining after two years.

“Some people may not be fully protected, but on balance, the strategy makes sense when supply is constrained,” Dr. Dai said. Britain also deferred second doses of the Covid vaccines early in the pandemic, when supplies were low, and offered them once more doses became available, he noted.

So far the F.D.A. and the Centers for Disease Control and Prevention are insisting on a two-dose regimen. “While the agency understands the desire to get out as many doses as possible, F.D.A. advises against departing from the product labeling,” Ms. Capobianco said.

The United States is among the few countries to have a supply of Jynneos. An older vaccine developed to combat smallpox is available worldwide but too dangerous for people who are immunocompromised or who have certain skin conditions.

The United States has purchased bulk material of Jynneos that can be converted into some 15 million finished doses over the next few weeks to months. The administration should share some of that supply with the rest of the world, said Zain Rizvi, who studies access to medicines at Public Citizen, an advocacy group.

“A global outbreak demands a global response,” Mr. Rizvi said. “The Biden administration should urgently convert its bulk stockpile into vaccines, and live up to its claim of being an arsenal of vaccines for the world.”

Delhi: Body of man with burnt face found inside a vacant flat