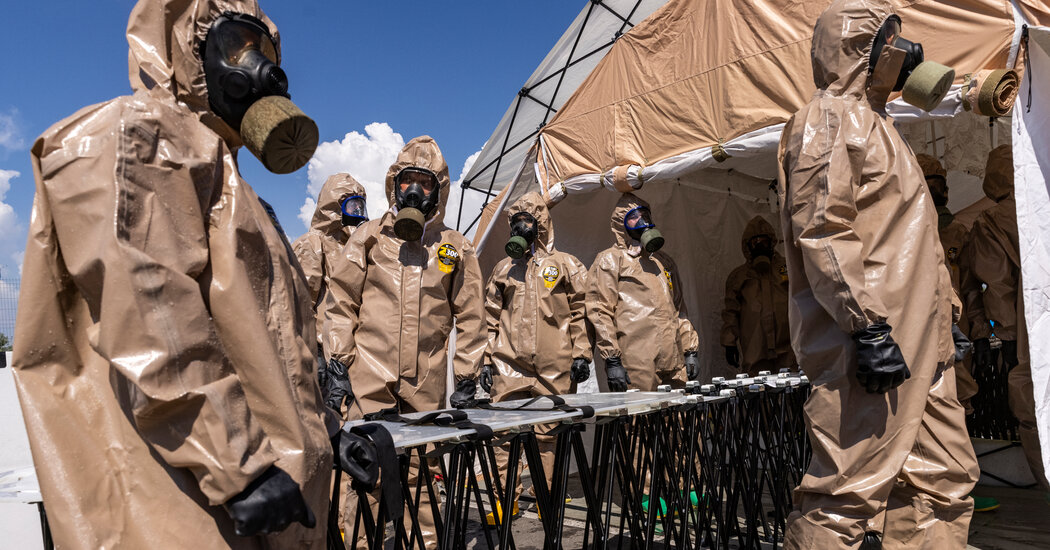 The Zaporizhzhia nuclear plant, the largest in Europe, has already been hit by shelling, and the United Nations chief, warning of disaster, called for a demilitarized zone around it.

KYIV, Ukraine — Tensions around the nuclear power plant on the front lines of the war in Ukraine escalated sharply on Thursday, as the Russian and Ukrainian militaries traded charges that each was preparing to stage an attack on the plant in coming days, risking a catastrophic release of radiation.

The Russian Ministry of Defense claimed that the Ukrainian military was preparing a “terrorist attack” on the sprawling Zaporizhzhia power plant complex on the Dnipro river, prompting the Ukrainian military intelligence agency to respond that the Russian warning was in fact a pretext for Moscow to stage a “provocation” of some kind there on Friday.

Invading Russian forces seized control of the plant, Europe’s largest nuclear power station, in early March and put it under the control of Rosatom, the Russian state nuclear company. But they have kept Ukrainian staff there to operate it.

On Thursday, the Ukrainian intelligence agency said that Rosatom engineers had “urgently” left the plant and that only “operative personnel” would be allowed at the plant on Friday.

“Entrance for all other employees will be closed,” it said.

An employee at the plant, communicating to The New York Times through a colleague in Kyiv, said that workers were terrified.

“The situation is terrible, everyone is scared of tomorrow’s provocations announced by Russia,” said the person, who spoke on the condition of anonymity out of fear for her safety. “Russia’s Defense Ministry said they expect provocations from the Ukrainian side, but we understand perfectly well what that means. Even more people are trying to leave.”

The fears of a possible attack came even as the United Nations secretary general, António Guterres, held talks in the city of Lviv, in western Ukraine, with the Ukrainian and Turkish presidents in an effort to ease military tensions around the site and restart diplomatic engagement to end the nearly six-month-old war. U.N. nuclear regulators have been pleading for access to the plant to ensure its safety.

For the first time in history, the invasion of Ukraine ordered by President Vladimir V. Putin of Russia has put nuclear power plants squarely in a war zone. For many Ukrainians, the risk is all too familiar: The Chernobyl plant, site of the world’s worst nuclear accident in 1986, lies in Ukraine, north of Kyiv, the capital. Russian forces seized that plant, too, early in the war, before withdrawing.

The Zaporizhzhia complex has been hit several times by shelling, with each side blaming the other, noting that a single errant shell hitting the wrong spot could spell disaster. Russian military units have taken up positions on and around the grounds, prompting charges that they are using it as a shield, able to lob shells and rockets across the Dnipro knowing that the Ukrainians are reluctant to fire back.

“The world is on a verge of nuclear disaster due to occupation of world’s third largest nuclear power plant in Energodar, Zaporizhzhia region,” President Volodymyr Zelensky of Ukraine wrote on Twitter on Thursday. “How long will it take the global community to respond to Russia’s irresponsible actions and nuclear blackmailing?”

Speaking at a news conference after the Lviv talks, Mr. Guterres urged Moscow and Kyiv to show the “spirit of compromise” that led to an agreement last month allowing Ukrainian grain exports to resume flowing from Black Sea ports, easing global food shortages.

“From day one, the parties have worked professionally and in good faith to keep the food flowing,” Mr. Guterres said. “I appeal for this to continue and for them to overcome all obstacles in the spirit of compromise and permanently settle all differences.”

Mr. Guterres said he was gravely concerned about the Zaporizhzhia power plant and called for a demilitarized zone around the site — an idea that the Russian Foreign Ministry rejected on Thursday. He acknowledged the complex issues involved but did not blame either side for the persistent shelling there.

“We must tell it like it is — any potential damage to Zaporizhzhia is suicide,” Mr. Guterres said, echoing comments he made earlier this month. He added that an agreement was urgently needed to re-establish the plant as a purely civilian-run facility.

U.N. officials have warned of the risks that fighting poses to the plant and its six reactors. Rafael Mariano Grossi, the director general of the International Atomic Energy Agency, told the U.N. Security Council last week that the situation had deteriorated “to the point of being very alarming.”

The uncertainty surrounding the security of the plant was underscored by a video that circulated online on Thursday, showing at least five apparent military trucks inside one of the complex’s buildings. By using archival photos of the interior of the different facilities on the premises of the nuclear complex, The Times determined that the video was taken inside the machine room of one of the plant’s reactors.

Why Russia would place military vehicles so close to a reactor is unclear. The reactors themselves are heavily fortified.

Ukraine’s foreign minister, Dmytro Kuleba, said on Thursday that Mr. Grossi had accepted a Ukrainian invitation to lead a delegation to the plant. “I emphasized the mission’s urgency to address nuclear security threats caused by Russia’s hostilities,” Mr. Kuleba wrote on Twitter.

Secretary of State Antony J. Blinken said on Twitter that he had spoken with Mr. Kuleba about “our ongoing concerns” at Zaporizhzhia.

But whatever Ukrainian officials say, it is the Russians who are in possession of the plant, and it was not clear that a visit by the international nuclear agency could be organized amid the fighting. Russia has expressed support for having international monitors inspect the site, but Ukraine had until recently indicated reluctance, possibly out of concern that such a visit could somehow legitimize Russia’s occupation there.

Speaking on Thursday at the summit in Lviv, Mr. Zelensky insisted that no agreement to safeguard the plant was possible unless Russia withdrew its forces from the complex.

Mr. Zelensky recounted that earlier in the day, when President Recep Tayyip Erdogan of Turkey said the grain deal had pointed the way to possible peace talks, he retorted, “There is no trust of Russians who rape and shell and fire cruise missiles at Ukrainians.”

“First, they have to free all of our territories and then we will see,” he added.

Russia, however, has continued to pound Ukrainian cities and towns with attacks. On Wednesday night and Thursday morning, a barrage of rockets hit the northeastern city of Kharkiv, destroying a dormitory for deaf and older people, pulverizing scores of homes and killing at least 15 civilians, Ukrainian officials said.

The civilian death toll in the city over the course of the six-month war has now surpassed 1,000, according to local officials.

“Last night became one of the most tragic for Kharkiv Region during the entire war,” the regional administrator, Oleh Syniehubov, said on Thursday morning. Rescue crews were still racing between blast sites, he said, adding that the casualty count could grow.

The Russian Ministry of Defense said it had struck a target in Kharkiv housing foreign mercenaries, but offered no evidence to support the claim.

The assaults began at around 9:30 p.m. on Wednesday, when a Russian cruise missile slammed into a dormitory that was home to older people and people with hearing impairments, according to Ukrainian officials. At least 10 civilians were killed and another 17 wounded, including an 11-year-old child.

Because some of those living in the building were deaf, Ukrainian officials said, they might not have heard the wail of the alarm warning of the incoming missile, or the shouts of firefighters calling out for survivors.

Video of the rescue efforts showed relatives of people inside one destroyed building screaming, crying and calling out for loved ones. “My grandmother is there,” one man shouts. There was no reply.

US Secretary of State Antony Blinken # 39; s gets here in India; to...