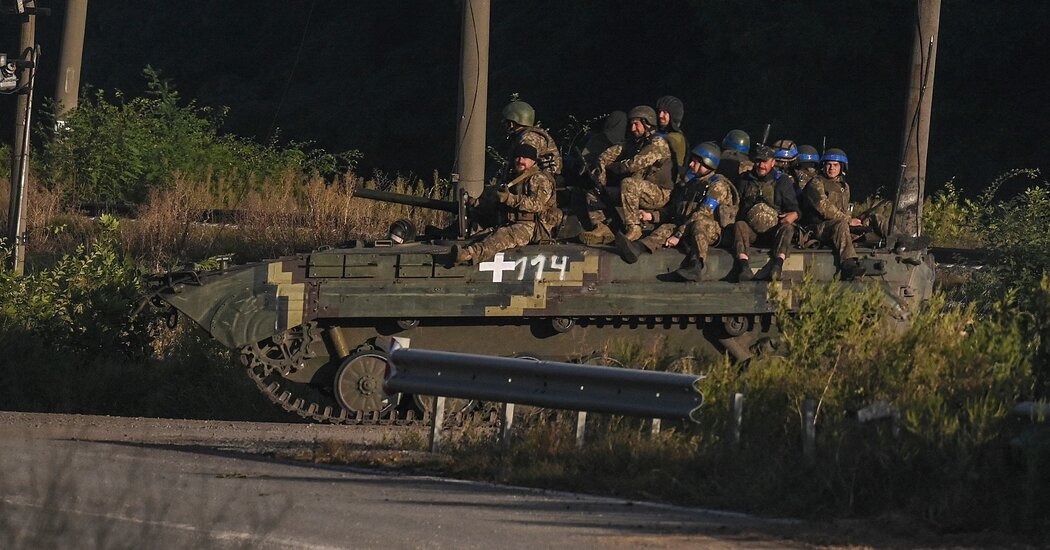 Sweeping south from positions in the Kharkiv region in Ukraine’s northeast, Ukrainian forces have made their largest gains since routing Russia from Kyiv in April.

KYIV, Ukraine — Ukrainian forces have scored the most significant battlefield gains since they routed Russia from the area around Kyiv in April by reclaiming territory in the northeast, according to Ukrainian officials, Western analysts and battlefield imagery.

In his overnight address to the nation Thursday, President Volodymyr Zelensky said that the Ukrainian military had captured scores of villages and large chunks of Russian-occupied territory across Ukraine since the offensive began. “In total, more than a thousand square kilometers of the territory of Ukraine have been liberated since the beginning of September,” he said.

On Friday the Ukrainian military appeared to be moving rapidly to cut off the city of Izium, a critical logistical hub for Russian military operations.

The new offensive in the north appears to have caught the Russian forces off guard. On Friday, its Defense Ministry said on Telegram that it was moving troops to reinforce the Kharkiv region, without specifying their numbers or specific locations.

“We need to be honest, the Ukrainian command has outplayed us here,” said Yury Podolyaka, a Ukrainian pro-Kremlin blogger with more than 2.2 million followers on Telegram. He warned that if the Russian forces failed to “stop the Ukrainian breakthrough” in the coming days “this will be the most serious combat defeat” for Moscow.

Ukrainian and Western officials cautioned that the offensive operations were in their early days, that the situation was fluid and that the gains were far from secure. Not all of the claims of advances by Ukraine could be independently verified, and much about the state of the fighting in both the east and the south of Ukraine is shrouded in uncertainty as the government in Kyiv enforces a media blackout, restricting journalists’ access to the front.

For months, Ukraine’s leaders declared loudly and often their intention to launch a counteroffensive in the south, around the port city of Kherson. And they proceeded to batter Russian supply lines, ammunition depots and command centers in the region with precision rockets, while massing troops and orchestrating covert attacks on military bases and Russian collaborators far behind enemy lines.

But they said virtually nothing about the northeast, until this week.

On Thursday, Ukrainian officials said their troops had pushed through the town of Balakliya, less than 30 miles from the city of Izium, which lies close to the Donbas, the contested area of eastern Ukraine that President Vladimir V. Putin of Russia has vowed to seize. President Zelensky released video of soldiers raising Ukraine’s blue-and-yellow flag above the town’s administrative building, and other officials posted videos, not all immediately authenticated, of locals coming out to greet the soldiers.

Ukrainian soldiers on Friday posted photos that purported to be in the vicinity of Kupiansk, which has served as the capital of the Russian occupation in the region. The Kremlin-installed head of the city administration, Vitaly Ganchev, urged women and children to evacuate as Ukrainian forces approached.

Mr. Ganchev said the city is under “constant rocket attacks from the armed forces of Ukraine,” according to RIA Novosti, a Russian state news agency.

In response to the growing threats in the south, the Russian military redeployed thousands of troops from the Donbas, apparently thinning their defenses in the north and providing an opening for the Ukrainians.

Russia’s seeming inability to secure a key flank near Izium also highlighted its challenge in defending occupied territory along front lines that stretch 1,500 miles from northeastern Ukraine to the Black Sea coast in the south. And the battlefield setbacks seemed to underscore the manpower issues plaguing the Russian army, which the United States estimates has suffered at least 80,000 wounded and killed since the invasion began in late February.

On Friday, some of Russia’s military bloggers voiced dismay over the inability of Russian commanders to prepare stout defenses. Others have demanded an explanation from the Russian military command or other authorities.

Maksim Fomin called on law enforcement to figure out why Russian forces were unprepared for the Ukrainian offensive. “The situation is very difficult,” he said. “Let’s exhale and say that we have been defeated.”

Some of the pro-Kremlin bloggers have warned that the loss of large swaths of occupied lands in Ukraine would undermine the “Russia is here forever” message that the occupying authorities have been preaching in order to sway locals to support them.

While the Ukrainian gains in the north were capturing most of the attention Friday, the southern counteroffensive also made gains, with Ukraine’s Security Service releasing photos of what it said was the city of Vysokopillia, in the Kherson region. That claim could not be independently verified.

Last week, Ukrainian forces reported that they had broken through the first line of Russian defenses in multiple locations in the Kherson region, where they remain engaged in fierce battles to drive the Russians back from well-fortified positions.

Michael Kofman, the director of Russian studies at C.N.A., a research institute in Arlington, Va., said the campaign in the south did not appear to be a diversion to draw Russian forces.

“These appear to be interrelated offensives,” he said on Twitter on Thursday. “Kherson likely intended as a more deliberate, sequenced advance. Kharkiv to take advantage of favorable conditions.”

Gen. Mark A. Milley, the chairman of the Joint Chiefs of Staff, said on Thursday that Ukraine has made tangible gains in recent days, but he sought to temper expectations for what will probably continue to prove a bloody campaign.

“There is fighting — both offense and defense — all the way from Kharkiv all the way down to Kherson,” he said at a news conference in Germany.

Still, General Milley said the Ukrainians were making efficient use of newly acquired weapons systems to set the stage for their offensive. The American-made HIMARS missile system, he said, has been used to strike more than 400 targets. And it is just one of a number of advanced weapons systems now being deployed by the Ukrainians.

But he emphasized that Russia, although its supply lines were strained and its manpower troubles far from resolved, retained significant advantages in the war.

“The war is not over,” he said. “Russia’s a big country. They have very serious ambitions with respect to Ukraine.”