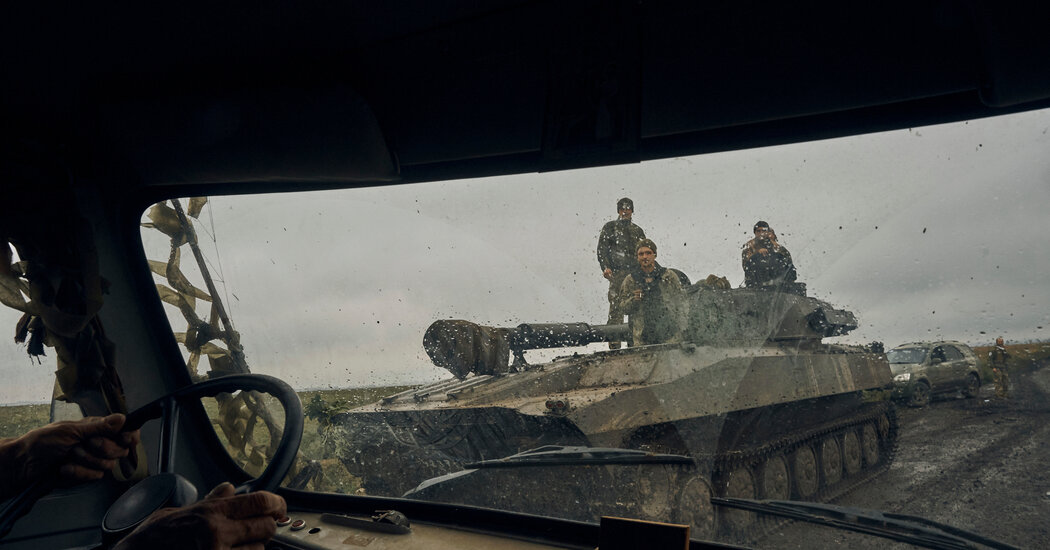 It’s not just one region. Ukraine is making progress in multiple places.

Could Ukraine actually win its war against Russia? Ukraine’s surprising recent breakthrough in the northeast has caused more military analysts to start asking that question.

Over the past week, Ukrainian troops have retaken almost 3,400 square miles of land, an area equal to about half the size of the New York metropolitan area. The gains include Izium, a city that Russia had been using as a rail hub to supply its forces elsewhere. Ukraine now controls nearly all of the province of Kharkiv.

The Kharkiv operation surprised Russian military forces while they were focused on other regions and has given Ukraine its clearest victory since Russia’s retreat from around Kyiv. President Volodymyr Zelensky and his military advisers planned the attack partly so they could claim such a victory, as this Times story explains.

“The Ukrainian push is a big deal,” said Julian Barnes, one of the reporters who wrote that story. “They needed a dramatic win, and this is one.”

Ukraine’s advance has also undermined Vladimir Putin’s war propaganda, causing some criticism of the military, even from some pro-invasion Russians. More than 40 local elected officials across Russia signed a two-sentence petition demanding Putin resign, and a senior member of Parliament from Putin’s party said the retreat had done “very serious damage” to the operation.

The recent developments have cheered Ukraine’s supporters in Western Europe and the U.S., who have been anxiously trying to maintain public support for military aid. Steven Erlanger, who covers European diplomacy from Brussels, points out that European citizens are girding for a winter of high energy prices because of Putin’s restriction of gas sales. The recapturing of Kharkiv allows more Europeans to feel as if their support of Ukraine is a worthwhile cause rather than a lost one. “It’s a morale boost,” Steven said.

In recent months, I have tried to focus readers of this newsletter on three broad scenarios for the war’s outcome: one, a Russian victory that includes control over large parts of Ukraine; two, a stalemate in which Russia controls much of the Donbas region, in Ukraine’s east, but little else; or, three, a Ukrainian victory, in which Russia largely retreats, with the exception of some parts of Donbas.

(For anyone trying to read the map above, the Donbas region includes two provinces: Donetsk and Luhansk.)

Many analysts continue to believe that a stalemate remains the most likely outcome. But I told you in our most recent Ukraine update — last month — that the chances of a Ukrainian victory had risen. They have risen even further since then.

“The last few days have shown that the Ukrainians can craft effective plans based on intelligence, advice and high-tech American weaponry used in innovative ways,” Julian said. “And those plans, so far, have delivered real battlefield results.”

A central question now is whether Ukraine can also make progress in two other regions where Russia is more entrenched: Donbas, in the east; and southern provinces in between Donbas and the Crimea peninsula (which Russia annexed in 2014). In recent weeks, Ukraine has also reclaimed about 200 square miles in the southern provinces.

A major reason for Ukrainian optimism is the continued support from the West, including weapons for Ukraine and sanctions on Russia. The progress in Kharkiv has depended on longer-range missiles that the U.S. and Britain were initially unwilling to provide but have supplied in recent months. U.S. officials also worked with Ukrainian military leaders to plan the assault on Kharkiv.

At the same time, the sanctions appear to be hurting both Russia’s domestic economy and its war efforts. Its factories are struggling to produce enough basic military supplies, while Russia is also having a hard time buying enough high-tech equipment on world markets. One sign that the military is running low on supplies: It has been trying to buy North Korean rockets and artillery shells, U.S. intelligence officials say.

Still, recapturing territory in the south and the east is unlikely to be easy for Ukraine. Russia has concentrated more forces in those regions than it had in Kharkiv. Now that Ukraine holds Kharkiv, it also has longer supply lines to defend, John Blaxland, a military expert at the Australian National University, told The Times. The seizure of Izium and its railways may help Ukraine maintain its lengthened supply lines, other experts said.

Biden administration officials continue to express skepticism that Ukraine will be able to reclaim all of the land it held in February, just before the invasion. Russia continues to have vast resources at its disposal, even if the sanctions have created some constraints: Russia has been firing many more artillery rounds per day than the Ukrainians. If that advantage continues, dislodging Russia from territory it holds may be difficult.

Russia also has a history of forcing brutal losses on its own soldiers to win extended wars, and Putin has shown he is willing to commit atrocities (as he did in Syria and Chechnya) to exhaust an opponent. Some analysts — including Ross Douthat of Times Opinion and Anne Applebaum of The Atlantic — have argued that Western leaders should be planning for how they would respond to an escalation in Ukraine.

Ukraine also faces a disadvantage that its allies have imposed on it, my colleague Helene Cooper points out. The U.S. and the E.U. have told Ukrainian officials that they cannot use Western military equipment to strike inside Russia — out of a fear that such attacks might cause Putin to expand the war or use nuclear weapons. From a tactical standpoint, that restriction hurts Ukraine’s ability to win the war, because it means that Russia does not have to worry about defending its own territory.

Yet it’s a restriction that seems unlikely to change anytime soon.

Instead of “quiet quitting,” fill your schedule with things you enjoy, says Laura Vanderkam.

“Nations and cultures need people and institutions who transcend politics,” David French writes in The Dispatch about the queen’s significance.

Hair complaints: Olaplex has a cult following — and some unhappy customers.

A Times classic: A chef’s ode to the restaurant Covid shuttered.

Lives Lived: Ramsey Lewis, a jazz pianist, unexpectedly became a pop star when his recording of “The ‘In’ Crowd” reached the Top 10 in 1965. He died at 87.

Seattle’s revenge: The Seahawks edged the Denver Broncos in an ugly season-opening win, surviving thanks to some baffling clock management from the Denver coach Nathaniel Hackett. Russell Wilson, arguably the best player in Seahawks history, got booed in his first game back after this summer’s trade.

Mike Trout fishes for history: The original Los Angeles Angels superstar has hit a home run in seven consecutive games, one shy of an M.L.B. record. The Angels are 3-4 in that stretch, another bizarre and disappointing data point in a season full of them.

The Cardinals are coming: St. Louis — No. 5 in this week’s M.L.B. power rankings — hasn’t lost a series since July and lurks as one of the league’s best teams. Albert Pujols, 42, is hitting .324 since the beginning of August and is three homers away from No. 700.

“Succession” and “Ted Lasso” took the top prizes for drama and comedy series, the second win for both. Other highlights:

“Abbott Elementary.” Accepting the award for best supporting actress in a comedy, Sheryl Lee Ralph belted out “Endangered Species” by Dianne Reeves to a standing ovation.

“The White Lotus.” The HBO dramedy was another big winner: best limited series, best directing and writing, and acting awards for Jennifer Coolidge and Murray Bartlett.

For more: There were some memorable acceptance speeches, but most of the telecast seemed bland, the critic Mike Hale writes. And here are the best red carpet outfits, and all the other winners.

Have breakfast for dinner, British-style.

My Chemical Romance let its songs and fans provide the drama at its reunion tour.

The pangram from yesterday’s Spelling Bee was exciting. Here is today’s puzzle.

P.S. The word “comfortwear” — baggy clothing that proliferated during the pandemic — appeared for the first time in The Times yesterday.

“The Daily” is about Ukraine. On “The Ezra Klein Show,” how social status shapes our lives.

Alaya F on working with Saif Ali Khan, Tabu in Jawaani Jaaneman, ‘they were...

Senate Votes to Add Finland and Sweden to NATO