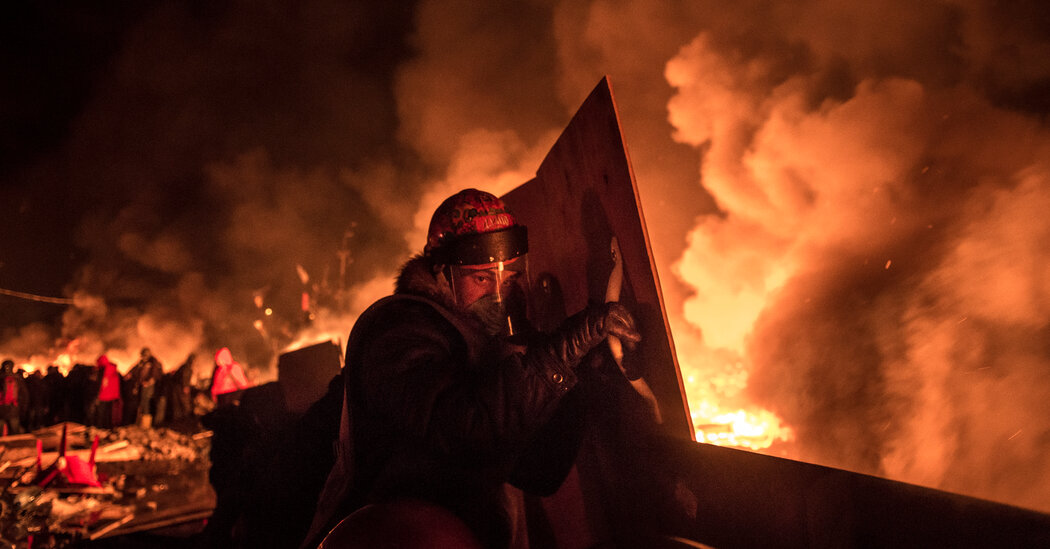 In hindsight, protests that began nine years ago and toppled a Ukrainian president were a pivot point in efforts by Vladimir V. Putin to exert Russian control over Ukraine.

KYIV, Ukraine — Ukrainians took to the streets nine years ago in protests that within weeks became street battles and in demonstrations that turned to revolution. They barricaded Kyiv’s Independence Square and set it ablaze. The police gunned people down. Soon, the president was forced out.

But on Nov. 21, 2013, almost no one saw that coming or recognized the day for what it was: a crucial turn in the country’s history and its relationship with Moscow. It was a major step toward the pivot by President Vladimir V. Putin of Russia to trying to conquer Ukraine from trying to control it from the outside, leading to the death and devastation he unleashed this year.

On Monday, President Volodymyr Zelensky of Ukraine used memories of that moment to rally a nation now at war. In a video address to the nation, he said it was commitment to freedom that animated the so-called Maidan revolution that began nine years ago, and that motivated resistance now to the Russian invasion that began in February.

“We can be left without money. Without gasoline. Without hot water. Without light,” he said. “But not without freedom. And it remains unchanged.”

Mr. Zelensky and his wife joined in subdued observances held across the country to commemorate the anniversary, now a revered day of remembrance, and to honor the protesters who were killed and are recalled as heroes. Residents of Kyiv, the capital, and other cities turned out with flowers despite winter weather and snow.

Mr. Putin’s forces continue to pound Ukraine’s cities and civilian infrastructure, trying to wear down the ability and will to resist of a nation he has been unable to defeat militarily. Mr. Zelensky said the Russians were firing hundreds of missiles, rockets, artillery shells and drones daily, most heavily in the eastern Donetsk region, where fierce combat is underway.

The list of targets now includes Kherson, the southern city the Russians occupied for eight months before retreating about two weeks ago. Shells have detonated there with deadly force — officials said three people were killed on Sunday — sowing terror and underscoring the threat still posed by the enemy now camped just across the Dnipro River.

As Russian artillery struck a residential area on Monday with a series of deafening blasts, Yulya Kalygina, 34, cowered in a stairwell with her 6-year-old daughter, Safya.

“I want to escape to Mykolaiv,” she said, referring to a city about two hours’ drive to the northwest. When asked to describe her thinking, she used the word “Russia” and the word “hate.”

Ukrainian officials have urged civilians in Kherson to evacuate, citing the lack of essential services and continued threat of attack, and pleaded with the majority who fled the city months ago not to return yet. But about 80,000 of the city’s prewar population of more than 250,000 remains, said Serhii Khlan, the deputy regional administrator.

“There is a significant part of Kherson that categorically refuses to leave,” he told journalists on Monday. “People say, ‘We survived the occupiers here, so now we will survive all the difficulties.’”

On Monday, Ukraine operated an evacuation train out of Kherson, part of the government’s effort to move people from areas where they cannot be assured of heat, water, power and other services.

As many as three million Ukrainians are expected to leave their homes this winter, officials from the World Health Organization said on Monday, in addition to the millions who have already fled the country or have been displaced internally.

Reflecting fears that the war could spill beyond Ukraine, Poland’s defense minister said on Monday that he would propose placing a Patriot missile system supplied by Germany near the Ukrainian border. NATO has so far refused to supply the Patriot, which is used to shoot down missiles, to Ukraine, but Poland is a NATO member.

Germany offered the system after an explosion last week killed two people in a Polish village near the border. Officials said that what had detonated was not a Russian munition but a Ukrainian air-defense missile fired at an incoming Russian missile, but the episode raised concerns that a strike on a NATO country, accidental or not, could broaden the conflict.

Mr. Zelensky on Monday took note of the many ways Ukraine has changed in nine months of war. “Craters appeared on our land,” he said. “There are roadblocks and anti-tank hedgehogs in our cities and villages.”

But the desire for freedom remains unchanged, he said, “and that’s why we will hold out.”

There were many milestones along the road to this war, but the upheaval known as the Maidan revolution, or Euromaidan, now looms especially large.

In 2013, Ukraine’s Parliament voted overwhelmingly in favor of a trade agreement with the European Union. The plan had immense support from the public, which saw it as a way to lessen Moscow’s influence, improve living standards and possibly reduce Ukraine’s endemic corruption.

In response Mr. Putin threatened crippling sanctions. He wanted a pliant Ukraine, politically and economically dependent on Russia, analysts say, not an independent-minded one drawing closer to the West.

President Viktor Yanukovych of Ukraine, though seen as an ally of Mr. Putin’s, said he would sign the trade agreement, but delayed for months. Finally, on Nov. 21, he announced that he was rejecting it and would make a trade pact with Russia. The protests, peaceful at first, began that day in the main square, or maidan, in Kyiv.

The crowds, in cities across the country, swelled into the hundreds of thousands, and violence grew.

The government imposed prohibitions on public assembly. Protesters armed themselves with makeshift shields, clubs and even gasoline bombs, and they took over public buildings. The police escalated from using tear gas and rubber bullets to firing live ammunition into the crowds. The fighting peaked in February 2014 in Kyiv, when about 100 protesters and a dozen police officers were killed.

Besieged and increasingly unpopular, Mr. Yanukovych fled Kyiv, going first to eastern Ukraine, where he and Russia had more support, and to Russia itself days later. The Kremlin called the sequence of events a Western-backed coup.

Within hours of his leaving the capital, the Ukrainian Parliament voted overwhelmingly on Feb. 22 to remove Mr. Yanukovych from office. Crowds surged into his palatial compound, gawking at his private menagerie of rare animals, his collection of classic cars and a restaurant designed to look like a pirate ship.

By Feb. 27, Russian troops had quietly infiltrated Crimea, the part of Ukraine with the strongest pro-Russian sentiment. The Kremlin’s seizure of the region was completed in a few days, with barely a shot fired. Ukraine barely knew what was happening, and with its military weak and its government a shambles, it was in no position to resist.

In March, Moscow’s proxies in eastern Ukraine started the war in the Donbas, the region now claimed by Russia. That fight, ironically, helped turn the Ukrainian military into an effective force. The war, though stalemated, was still underway when Mr. Putin launched a full-scale invasion.