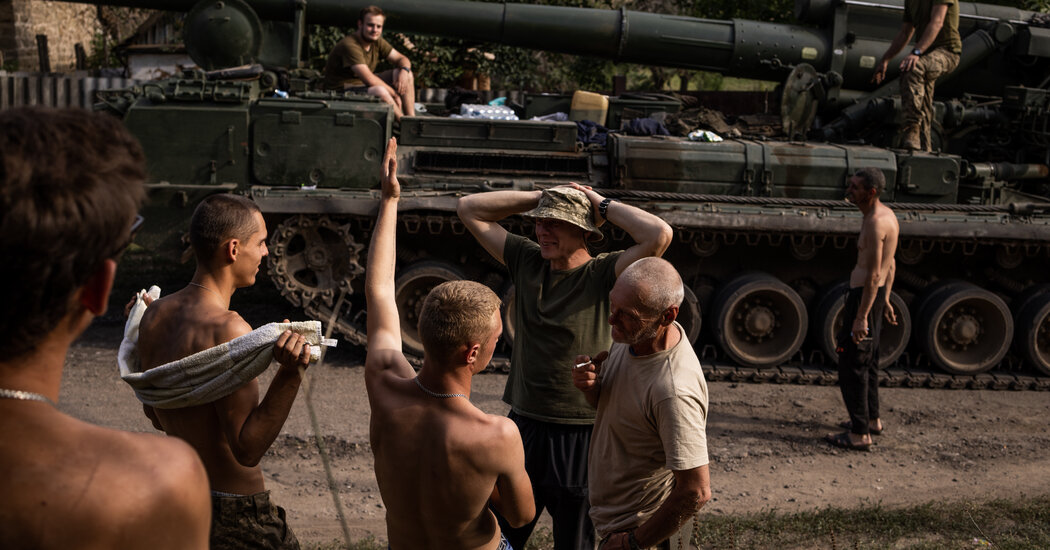 Both Russia and Ukraine are preparing for a protracted standoff, but Ukraine has greater incentive to try to avoid it.

KYIV, Ukraine — For months Russian and Ukrainian soldiers have waged a brutal war across a 1,500-mile front line, inflicting casualties, fighting to the point of exhaustion and making slow gains in territory when they were not suffering costly setbacks.

After beginning with the Russian seizure of part of southern Ukraine and a failed strike at the capital, Kyiv, and then pivoting to a bloody artillery battle in the country’s east, the war is entering a third chapter. A battlefield stalemate prevails, with hostilities at a simmer, amid anxious uncertainty over whether — and when — Ukraine will launch a counteroffensive to try to break the deadlock.

The timing for any such attack has emerged as a pivotal decision for Ukraine’s government. Both sides are preparing for a protracted war, but Ukraine has greater incentive to try to avoid it with potentially risky maneuvers as early as this fall — before the rainy season turns the countryside into impassable bogs, or energy shortages and soaring costs undermine European support.

“An offensive is risky,” said Michael Kofman, the director of Russian studies at C.N.A., a research institute in Arlington, Va., assessing Ukraine’s options.

“If it fails, the outcome could affect external support,’’ he said. “On the other hand, Kyiv likely sees this as a window of opportunity, beyond which lies the uncertainty of a protracted war against a Russian army that has had time to entrench.”

From the Ukrainian perspective, the mostly static trench fighting cannot go on indefinitely. Leaving Russia in control of much of the southern coastline would cripple Ukraine’s economy, already cratering from the war and propped up by Western aid. It would also give space to Russia to solidify control in areas it has captured, blanketing news media and school curriculum with its propaganda, arresting or driving out opponents, and potentially declaring the land part of Russia after staging sham referendums.

President Vladimir V. Putin is also facing some political pressure to secure a battlefield breakthrough — especially after Ukraine’s attacks on the Russian-occupied Crimean Peninsula, and the car bombing that killed an ultranationalist commentator last weekend. The attacks had Russia’s pro-war hawks calling for revenge.

But numerous signs suggest that Mr. Putin will ignore those calls and settle instead on a strategy of plodding offense designed to exhaust and kill Ukrainian forces. The latest evidence came on Thursday, when the Kremlin published Mr. Putin’s order increasing the target size of the armed forces by 137,000, to 1.15 million.

Analysts said the decree hinted that Mr. Putin was preparing for a long and grinding war, but not necessarily a large-scale draft that would mark a major escalation and perhaps prompt a domestic backlash.

Ukraine was bolstered this week by the promise of a $3 billion military aid package from the United States. Biden administration officials said the aid was as much a message to Mr. Putin that the United States is in this for the long haul, as it was to Ukraine that America will continue to try to hold the NATO alliance together in backing Kyiv indefinitely.

Administration officials insist that President Biden is committed to helping Ukraine win, even in a war of attrition, if it comes to that. Colin H. Kahl, under secretary of defense for policy, said at a news conference this week that Mr. Putin’s assumption that he can “win the long game’’ was “yet another Russian miscalculation.”

In Russian state media, the message that Russia might be only at the start of a long and existential war against the West — now being fought, by proxy, in Ukraine — is sounding with increasing clarity. It is a sharp shift from six months ago, when Ukrainians were depicted as lacking the will to fight and eagerly awaiting Russian “liberation.”

“We will have fewer Russian tourists in Europe, but the size of the Russian army will increase by 140,000 regular servicemen,” Igor Korotchenko, the editor of a Russian military journal, said on a state television talk show. “I expect that this is just the beginning.”

While Mr. Putin may be content with a protracted standoff, President Volodymyr Zelensky of Ukraine is in some ways fighting against the clock.

“The very difficult state of our economy, the constant risks of air and missile attacks and the general fatigue of the population from the difficulties of war will work against Ukraine” over time, Andriy Zagorodnyuk, a former defense minister, wrote in the Ukrainska Pravda newspaper. He said the military should be prepared to advance, rather than defend.

“It makes no sense to drag out the war for years and compete to see who will run out of resources first,” he wrote.

Stage-managed elections to justify annexation could come as early as next month, Western officials say, putting additional time pressure on Mr. Zelensky to launch an offensive.

But several military analysts say there is a disconnect between Ukrainian civilian leaders, pressing for a major victory, and military leaders who want to ensure they have sufficient troops and combat power before conducting a major offensive.

“There’s a desire to show international partners that their support will enable Ukraine to win, not just hold on,” said Jack Watling, a senior research fellow at the Royal United Services Institute in London, who just returned from Ukraine. “And there is an expectation from the Ukrainian people they’ll be able to liberate their territory.”

But he cautioned, “a military offensive needs to be based on conditions on the battlefield,” not in the political arena.

Over the last month, the Ukrainians have pivoted to the new strategy of so-called “deep war” — hitting targets far behind the front — after months of grim artillery duels and street fighting in the eastern region of Luhansk, which ultimately fell under Russian control by early July.

Using long-range, precision guided rockets provided by the United States and others, the Ukrainian military has been striking Russian weapons depots, bases, command centers and troop positions deep into occupied territory, including Crimea, the peninsula Mr. Putin seized in 2014.

Ukraine has for months been telegraphing plans for the major battle in the south; the types of weapons it has requested from Western allies and the tactics it pursues on the battlefield offering clues to its strategy.

Tellingly, a recent U.S. military assistance package included armored vehicles with mine-clearing attachments that would be used in a ground advance, suggesting preparations for the opening of what would be a new, ground attack phase of the war. Ukraine pushed back Russian forces that were in disarray in the battle for Kyiv last winter, but has yet to demonstrate it can overrun well-fortified Russian defenses.

For Mr. Putin, even a partial loss of territory as a result of a counteroffensive would represent a major embarrassment, in part because of how he has framed the stakes: Ukraine, he falsely claims, is carrying out a “genocide” of Russian speakers. Russia has failed to capture a single major population center since early July, frustrating the war’s most ardent backers.

But the Russian leader, in control of the state media and the political system, is well-situated for the moment to ignore any criticism, analysts say.

Instead, Mr. Putin insists that his forces are advancing in eastern Ukraine’s Donbas region “step by step.”

A senior Biden official, speaking on condition of anonymity to discuss confidential assessments, countered that narrative in an interview on Friday, describing the Russian advance in Donbas as so slow that “a good day for them is if they advance 500 meters.”

Though conventional wisdom has held that stringing out the war would favor Russia, it also carries risks for Mr. Putin, doing more damage to his economy and bringing more Western weaponry to bear: Despite the arrival of artillery systems from NATO members, Ukraine’s arsenal is still largely made up of Soviet-era arms.

At home in Ukraine, Mr. Zelensky has broad support for continuing the war. An opinion poll by the Razumkov Center, a policy research organization in Kyiv, released on Monday showed 92 percent of Ukrainians are confident in a military victory.

With the decision on an attack in the south looming, Mr. Zelensky has taken pains to show unity with his generals. At a news conference this week, he praised the commander, General Valeriy Zaluzhny, and denied rumors he intended to dismiss the general.

“We work as a team,” Mr. Zelensky said. Asked to assess the general’s performance, he said, “The most important assessment is we are holding on. That means the assessment is high. When we win, it will be the highest assessment.”

Andrew E. Kramer reported from Kyiv, Anton Troianovski from Berlin and Helene Cooper from Washington. Reporting was contributed by Eric Schmitt from Washington and Oleksandr Chubko from Kyiv.

Emraan Hashmi on working with Amitabh Bachchan: I have achieved a milestone