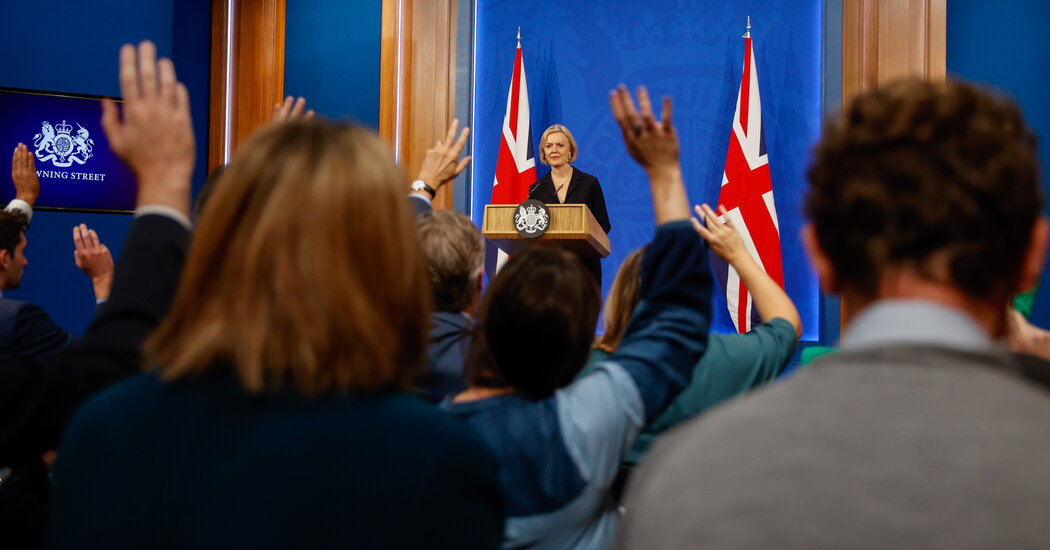 Fighting for her political survival, Prime Minister Liz Truss fired her top ally and reversed course on tax-cutting plans, trying to shore up financial markets and her poll ratings.

LONDON — Faced with a spiraling crisis that threatens her grip on power, Britain’s new prime minister, Liz Truss, on Friday fired her close ally and finance minister, and reversed another of her flagship economic policies in a desperate attempt to stabilize her embattled government.

On a day of confusion and high drama, Ms. Truss called the minister, Kwasi Kwarteng, chancellor of the Exchequer, back from meetings in Washington, dismissed him and then announced that she would allow a business tax increase to take effect — ripping up a key element of the economic agenda she and Mr. Kwarteng had crafted together.

To replace him as chancellor, she named Jeremy Hunt, a former cabinet veteran whose moderate views and pragmatism seemed designed to soothe financial markets and public opinion, both unnerved by the plans for unfunded tax cuts that the government unveiled last month.

But in a stilted, eight-minute news conference — in which she struck a markedly unapologetic tone — Ms. Truss answered just four questions and did little to calm speculation that she now faces an uphill fight to keep her job. Nor did her performance appear to mollify jittery financial markets, where government borrowing costs increased again on Friday, the pound fell and analysts expressed nervousness about the days ahead.

In power for less than six weeks, Ms. Truss has presided over a collapse in the already-weak support for her Conservative Party, following an intense backlash — in financial markets, in Parliament and in public opinion surveys — against her supply-side economic strategy of tax cuts and deregulation. She had campaigned on that platform to become Tory party leader, despite economists’ warnings, winning election last month.

The crisis reached a crescendo on Friday as events moved with bewildering speed. Just a day earlier, Mr. Kwarteng, then in the United States attending meetings of the International Monetary Fund, said when asked about his future: “I’m not going anywhere.”

Summoned back to Downing Street, Mr. Kwarteng had by Friday lunchtime become one of the shortest-serving chancellors in the history of the centuries-old office, and in his letter of resignation he did not seek to conceal the fact that he had been fired.

“You have asked me to stand aside as your Chancellor. I have accepted,” he wrote.

The turmoil began on Sept. 23 when a package of unfunded tax cuts, announced by Mr. Kwarteng, prompted the British pound to plunge and government borrowing costs to rise, while lenders withdrew some home purchase loans. Financial markets were particularly rattled because Mr. Kwarteng appeared to have ignored expert warnings about market volatility and had sidelined the Office for Budget Responsibility, an independent watchdog that normally scrutinizes such announcements.

The tax cuts promised to swell government debt, and economists warned they could add fuel to the price inflation now plaguing Britain.

Last week the government was forced into one retreat, shelving plans to reduce income taxes for the highest earners.

On Friday Ms. Truss went further by promising not to kill a corporate tax increase set in motion by her predecessor, Boris Johnson, reversing a pledge Mr. Kwarteng had made last month in his ill-fated announcement, known as a mini budget.

“It is clear that parts of our mini budget went further and faster than markets were expecting,” Ms. Truss said on Friday, adding, “We need to act now to reassure the markets.”

Ms. Truss added that the corporate tax rise would generate £18 billion, or $20 billion, which would act as a “down payment” to reassure markets of the government’s fiscal discipline and help restore confidence.

But she declined to apologize for the turbulence of recent weeks, gave little impression of contrition and insisted that she remained committed to her mission of spurring economic growth.

Ms. Truss’s statement seemed designed to convince investors that she now appreciated their concerns over the importance of fiscal discipline, while also signaling to her supporters that the broader tax-cutting principles on which she was elected remained intact. But the instant verdict of one former Conservative cabinet minister, David Gauke, was simple and brutal: “That won’t do,” he wrote on Twitter.

And there is little doubt that the policy retreat has delivered a huge blow to the authority of Ms. Truss from which she will struggle to recover.

Some critics argue that, by firing Mr. Kwarteng, she has dispensed with someone who had merely carried out her own wishes. The two politicians have been close friends as well as political allies, and together co-authored a book on free-market economics a decade ago.

And some analysts think that in sacrificing him, Ms. Truss might have removed her human shield, making her a bigger target for her opponents.

“Liz Truss has sacked Kwarteng to save her skin, but her action will only confirm the fact that her government has already entered a phase of extreme dysfunction,” said Richard Toye, a professor of modern history at the University of Exeter. “Using her chancellor as a sacrificial lamb may not prevent her becoming the shortest-serving prime minister of all time.”

In the short term, Downing Street will hope Ms. Truss has walked back enough of her agenda to pacify turbulent financial markets, although on Friday she did not withdraw her big plan to reduce the basic rate of income tax.

Then she will need to calm tensions in Parliament, where her supporters recognize that her leadership is under threat. Even before the latest day of frenetic activity, the foreign secretary, James Cleverly, on Thursday felt compelled to warn colleagues against trying to remove her, saying that “changing the leadership would be a disastrously bad idea.”

On Friday William Hague, a former leader of the Conservative Party, described recent events as “a catastrophic episode,” telling Times Radio that the prime minister’s leadership “hangs by a thread.” These were, he said, “her policies too,” adding: “and plenty of warning was given by many of us about what would happen if we had unfunded tax cuts and whether it would be financially and politically sustainable.”

Cabinet ministers expressed their support for the prime minister, but Ms. Truss’s position is not strong because she was not the top choice of Conservative Party lawmakers to succeed Mr. Johnson, who was forced out earlier this year after a succession of scandals.

In the leadership contest this summer, more Tory lawmakers backed a former chancellor, Rishi Sunak, who warned against Ms. Truss’s economic strategy. But when he and Ms. Truss emerged as the top two contenders, the choice was put to Conservative activists, who elected her decisively.

The Conservatives have already replaced three leaders since 2016, and on Friday the leader of the opposition Labour Party, Keir Starmer, demanded a general election.

That is the last thing most Tory lawmakers want — an election held now would be a blood bath for them, opinion polls show. In her short time in power, Ms. Truss has presided over a collapse in her party’s standing, with Labour gaining the sort of commanding lead it last enjoyed in the 1990s under Tony Blair.

Having only just forced out Mr. Johnson, Conservative lawmakers would have to change their party rules to challenge Ms. Truss, though that can be done if enough of them wish. Few want another protracted leadership contest, and any push to replace Ms. Truss is fraught with difficulties.

So a move to oust her is likely to succeed only if there is a consensus about who should take over, and there is no sign that Conservatives are in agreement.

Amid the renewed plotting against Ms. Truss in Parliament there were also signs that an erosion of faith in her leadership among the public could be hard to stop. One tabloid newspaper has set up a YouTube video devoted to the question of whether the prime minister’s time in Downing Street will now exceed the shelf life of a head of lettuce.

What the F.B.I. Seized From Mar-a-Lago, Illustrated