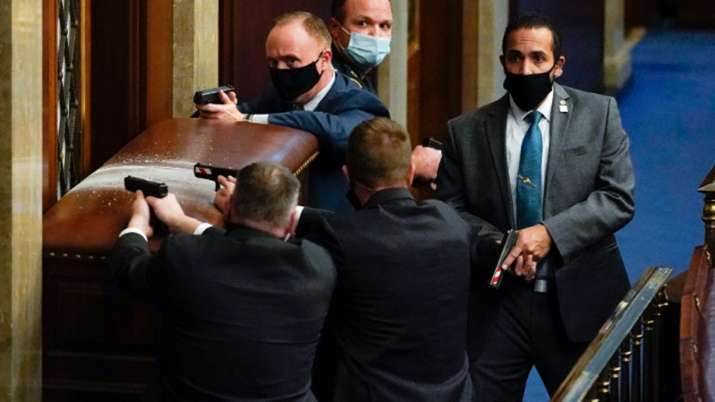 In an “unprecedented assault” on democracy in America, thousands of angry supporters of President Donald Trump stormed the US Capitol and clashed with police, resulting in casualty and multiple injuries and interrupting a constitutional process to affirm Joe Biden’s victory in the presidential election.

The police, outnumbered by the maskless protesters, had a tough time in managing the mob, as hundreds of protesters breached security and entered the Capitol building on Wednesday, where members of the Congress were going through the process of counting and certifying the Electoral College votes. Both the House and Senate and the entire Capitol were placed under a lockdown.

Vice President Mike Pence and lawmakers were evacuated to safe locations. One woman who was shot inside US Capitol has died, CNN reported, quoting a spokesperson with the Metropolitan Police Department. Multiple officers were injured during the mob attack.

The protesters at the Capitol started to disperse following the enforcement of curfew in the national capital. However, dozens of protesters remained on the streets in defiance of the curfew. Mayor Muriel Bowser announced the curfew earlier in the day after Trump supporters stormed the Capitol.

In a letter to colleagues, House Speaker Nancy Pelosi said leaders of Congress have decided to resume the joint session tonight once the Capitol is “cleared for use.”

Trump, who earlier encouraged his supporters to head to the Capitol, urged them to abide by the law and go back home after the violent clash. “This was a fraudulent election, but we can’t play into the hands of these people. We have to have peace. So go home,” Trump said in a video message posted on Twitter.

These and other scenes from the Capitol shocked the world as violent protesters loyal to President Trump stormed the nation’s halls of power in a brazen attempt to undercut democracy and keep Democrat Joe Biden from replacing Trump in two weeks.

The micro blogging site later removed the video and some tweets in which Trump appeared to defend the actions of his supporters.  Twitter also locked President Trump’s account for 12 hours for the first time and warned that he could get kicked off permanently.

President-elect Joe Biden has said that he was shocked and sad to see the US has “come to such a dark moment”.

“At this hour, our democracy is under unprecedented assault. Unlike anything we’ve seen in modern times. An assault on the citadel of liberty, the Capitol itself. An assault on the people’s representatives and the Capitol Hill police, sworn to protect them. And the public servants who work at the heart of our Republic…,” Biden said in an address to the nation.

“Let me be very clear. The scenes of chaos at the Capitol do not reflect a true America. Do not represent who we are. What we’re seeing are a small number of extremists dedicated to lawlessness. This is not dissent. It’s disorder. It’s chaos. It borders on sedition. And it must end now,” Biden said.

“I call on President Trump to go on national television now to fulfill his oath and defend the Constitution by demanding an end to this siege,” he said.

White House Press Secretary Kayleigh McEnany said President Trump has directed the National Guard and other “federal protective services” to assist with responding to the rioters at the Capitol. However, Acting Secretary of Defence Chris Miller said he discussed deployment of National Guard with Pence, Senate Leader McConnell, House Speaker Pelosi and Senator Schumer. He did not mention President Trump.

Multiple news outlets earlier showed protestors walking with ease inside the Capitol and hundreds of them occupying the inaugural stage. A large number of them were seen climbing the wall. Video taken at the US Capitol showed some rioters breaking the glass of a window and then climbing through the shattered pane.

“We’re actually looking at video right now of these anarchists… these people who were involved in this insurrection. They broke the glass in the United States Capitol and now they are climbing through the window,” CNN correspondent Dana Bash described the footage.

“The violence and destruction taking place at the US Capitol Must Stop and it Must Stop Now. Anyone involved must respect Law Enforcement officers and immediately leave the building,” Pence tweeted. “…this attack on our Capitol will not be tolerated and those involved will be prosecuted to the fullest extent of the law,” he added.

This is possibly for the first time in the recent history that such a large number of people have breached into the Capitol and disrupted the constitutional provisions. Congress had certified just 12 votes before the riots broke out. All 12 of those votes went to President Trump. There are 538 electoral votes in total.

Trump – who lost the popular and electoral college vote – continues to dispute the results. He alleges that there was a massive voters’ fraud and electoral malpractice. Election officials have denied the allegations.

Former Republican president George W Bush, Senator Ted Cruz, Senator Mitt Romney and Congressman Steve Womack have condemned the attack on Capitol. Acting Attorney General Jeffrey A. Rosen called the violence at the US Capitol “an intolerable attack on a fundamental institution of our democracy.”

“US Capitol Police saved my life. Attacks on law enforcement officers trying to do their jobs are never acceptable. Period. We can passionately protest without being violent,” said House Republican Whip Steve Scalise.