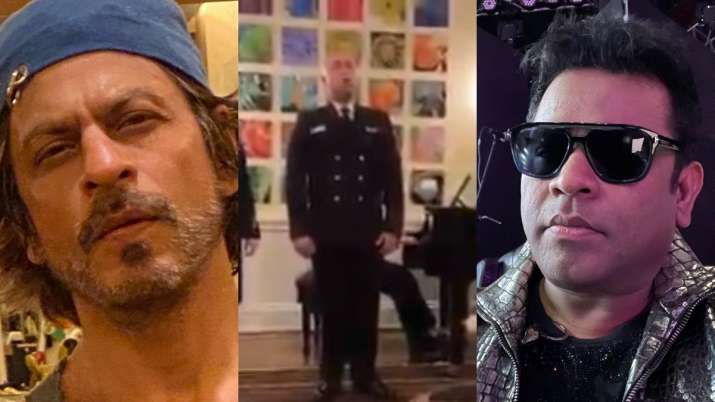 Feeling nostalgic about the iconic song of his film, Shah Rukh Khan shares his reaction to the viral tweet of US Navy members singing ‘Yeh Jo Des Hai Tera’ at a dinner meeting between US Chief of Naval Operations (CNO) Michael M Gilday and India’s Ambassador Taranjit Singh Sandhu. The video got viral on social media when Taranjit Singh Sandhu, shared a video to Twitter on Saturday, which sees the US Navy officers singing ‘Yeh Jo Des Hai Tera’ from the film ‘Swades’. He wrote: “This is a friendship bond that cannot be broken ever.’ The song was originally composed and sung by AR Rehman for the 2004 film Swades.

The clip shows a team of singers and musical instrument players from the US Navy band dressed in their uniforms as they present the song. The 1.5-minute video has garnered over 341k views on the microblogging site.

It caught the attention of superstar SRK who took to Twitter and wrote, “Thank u for sharing this sir. How lovely. Git all nostalgic about the time spent making this beautiful film and belief sung in the song. Thanx @AshGowariker @RonnieScrewvala @arrahman & everyone who made it possible.”

Not just him, but even music maestro AR Rahman reacted to the same and tweeted, “Swades rules for ever.”

The song from the 2004 movie Swades revolves around Mohan (played by Shah Rukh Khan), an Indian expatriate employed with NASA, who travels to his country to track down his beloved nanny, Kaveri. During his stay, he finds himself advocating for reform in a village.