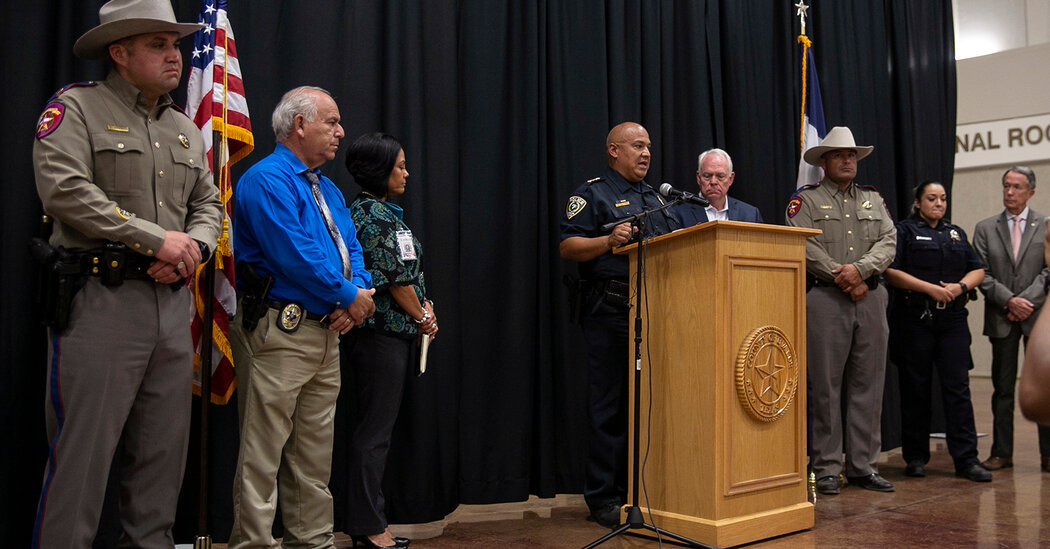 The South Texas school district said it would delay a decision on terminating the chief who led the schools’ response to a school shooting.

SAN ANTONIO — Despite intense public pressure for accountability, school district officials in Uvalde, Texas, said on Friday that they were postponing a meeting that had been scheduled to consider terminating their school police chief, Pete Arredondo, for his role in the delayed police response to a mass shooting that left 21 people dead at an elementary school.

In a brief announcement, the district said that a meeting that had been scheduled for Saturday to consider the chief’s continued employment had been indefinitely postponed.

“In conformity with due process requirements, and at the request of his attorney, the meeting to consider the termination of Chief Arredondo will be held at a later date which has yet to be determined,” Anne Marie Espinoza, the district’s communications director, said in a statement.

The district had initially said that the school board would meet in closed session to consider a recommendation from the superintendent, Hal Harrell, that the police chief be fired.

But the superintendent cautioned parents who had been demanding his termination that removing the chief was complicated because he was considered a contract employee.

The school district has not disclosed the terms of the contract. But under general education union policies in Texas, school boards have a right to terminate a school district employee, including an administrator, for a failure to perform duties or for good cause, though employees would usually have the right to challenge that decision in court.

School police chiefs in Texas do not have the same kinds of contracts and due process protections from firing that educators do, said Chief Bill Avera, a vice president of the Texas School District Police Chiefs’ Association.

Still, districts often give their professional employees, such as police chiefs, employment contracts, Chief Avera said, though he cautioned that he did not know what Chief Arredondo’s arrangement had been. “My suspicion might be that his lawyer wants to negotiate an exit,” he said. “You want to work out the best deal you can for your client.”

Nineteen students and two teachers were killed in the attack on May 24 at Robb Elementary School that has left the small community in South Texas reeling, with widespread public demands for police officials who took more than an hour to halt the gunman’s siege to be held to account.

Mr. Arredondo has been on unpaid suspension since late June and resigned a seat he recently won on the City Council. The superintendent’s recommendation to fire him came less than a week after a Texas House committee released a damning report that blamed the chief and hundreds of other responding officers for “systemic failures and egregiously poor decision making.”

In the weeks since the shooting in May, Uvalde residents have packed City Council and school board meetings to demand answers. Much of that anger has been directed at Chief Arredondo, who under the school district’s mass shooting protocol was supposed to lead the response.

He has said that he was not in charge, but the legislative committee said the overall response was hindered by chaos and misinformation. Instead of speedily entering a pair of connected classrooms where the gunman was holed up, the committee found, police officers searched for shields, backup and keys for a classroom door that was ultimately found to be unlocked.

The state investigators concluded that some of the victims died on their way to the hospital. “It is plausible that some victims could have survived if they had not had to wait 73 additional minutes for rescue,” the report said.

Chief Arredondo told the committee that he might have acted to breach the classroom sooner had he known there were still victims alive inside. “We probably would have rallied a little more, to say, ‘OK, someone is in there,’” he said.

In a letter addressed to the city when he vacated his council seat, Chief Arredondo said that stepping away was “in the best interest of the community” and that he had decided to do so in order “to minimize further distractions.” He said the mayor, Council and city staff members “must continue to move forward to unite our community, once again.”

The mayor of Uvalde, Don McLaughlin, has also announced that the acting city police chief during the shooting, Lt. Mariano Pargas, has been placed on administrative leave and that the city had begun its own internal inquiry.

The Texas state police said they had opened their own investigation to determine whether any of the scores of state officers who responded to the scene, which included Texas Rangers and state troopers, broke any laws or department policies by not confronting the gunman sooner. The Border Patrol also said it would examine the actions of its officers.

The Signs of the Tour de France