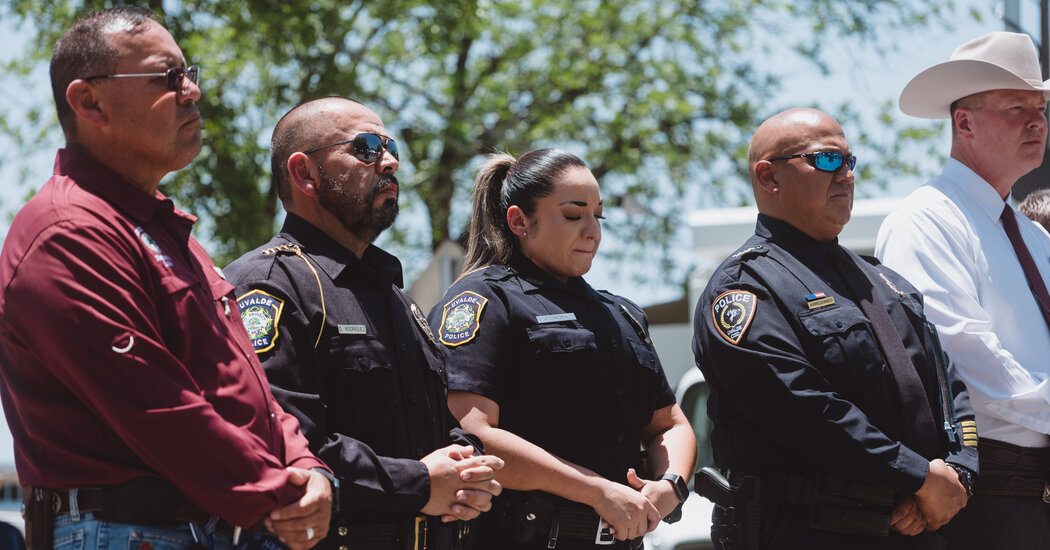 Chief Pete Arredondo has been criticized for a delay of more than an hour in entering the classroom where a gunman had fatally wounded 19 students and two teachers.

SAN ANTONIO — Facing widespread public pressure, the school superintendent in Uvalde, Texas, has recommended firing the school district police chief, Pete Arredondo, for his role in the delayed response to a mass shooting that allowed a gunman to remain in two classrooms full of surviving students for more than an hour.

A school board meeting set for Saturday will include a closed session with the district’s lawyer to discuss “possible action regarding termination for good cause” of Chief Arredondo based on a recommendation from the superintendent, Hal Harrell, according to a board agenda made public on Monday.

In the weeks since the May 24 shooting, many Uvalde residents have been calling for the termination of Chief Arredondo, who under the district’s mass shooting response plan was supposed to lead the response but failed to order any officers into the besieged classrooms as he searched for backups, shields and keys. Nineteen students and two teachers were killed in the attack.

Chief Arredondo, who could not be immediately reached for comment, had told state investigators that he did not consider himself the incident commander; a state legislative committee faulted the several police agencies that sent officers to the scene for a response it depicted as chaotic and ineffective. Nearly 400 officers waited some 77 minutes to confront the gunman.

Chief Arredondo already had resigned a seat he had recently won on the City Council, and had been placed on administrative leave from his job with the school district police force.

In a letter addressed to the city when he stepped down, he said the decision to give up his council seat was “in the best interest of the community” and made in order “to minimize further distractions.” He went on to say that the mayor, the City Council and the city staff “must continue to move forward to unite our community, once again.”

Families in Uvalde have also been demanding that other officers who responded to the shooting scene, some of whom are seen on video idling in the school hallway, are also held to account.

This week, the Texas state police announced that they have opened an investigation to determine whether any of the scores of officers who responded to the scene, which included state troopers and Texas Rangers, broke any laws or department policies by not confronting the gunman more quickly.

The Border Patrol also said it would examine the actions of its officers, who ultimately formed a tactical team that entered the classrooms and killed the gunman.

The state legislative committee report, which was released on Sunday, found that a more aggressive response by the police would not have prevented the deaths of many of the victims, shot with an AR-15-style rifle that caused devastating injuries. But others died on the way to a hospital. “It is plausible that some victims could have survived if they had not had to wait 73 additional minutes for rescue,” the report said.

“If there’s only one thing that I can tell you is, there were multiple systemic failures,” State Representative Dustin Burrows, who led the investigative committee, said at a news conference after the report’s release. “Several officers in the hallway or in that building knew or should have known there was dying in that classroom, and they should have done more, acted with urgency.”

Mr. Burrows said it would be up to individual agencies to hold their officers accountable.

The news that the school board would consider firing Chief Arredondo was welcomed by some family members of the victims.

“This is a move in the right direction. Let’s start with Arredondo, from the top, and work our way down,” said Vincent Salazar, the grandfather of Layla Salazar, who was killed at the school. “They should not have to wait until Saturday.”

Rashtrapati Bhawan to reopen for public from February 6, FREE registration for Mughal Garden