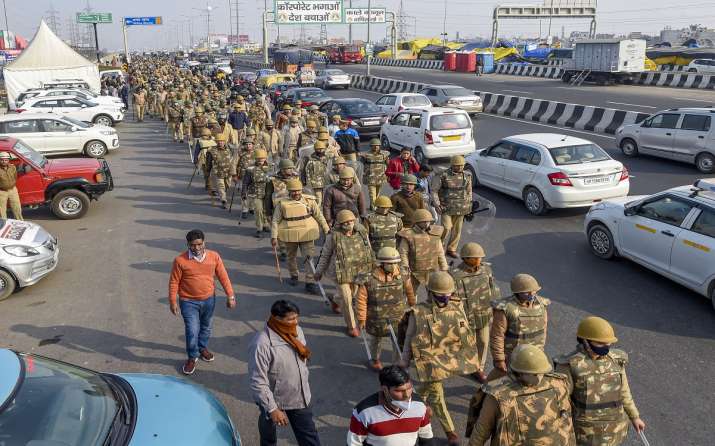 The Ghaziabad administration has reportedly served an ultimatum to protesting farmers to vacate the Ghazipur protest site.  According to sources, the district administration may move ahead to remove blockade at UP Gate on Delhi-Meerut Expressway by Thursday night.

A heavy police deployment has been made at Ghazipur and Ghaziabad District Magistrate Ajay Shankar Pandey along with other top police officials have reached the protest site.

The agitation at the Ghazipur border against the three farm laws is being led by Bhartiya Kisan Union spokesperson Rakesh Tikait, who has been named in the FIR by the Delhi Police in connection with the Republic Day violence. Nearly 37 farmer leaders, including Tikait, Yogendra Yadav and others were named in the FIR. So far 25 FIRs have been filed over the January 26 incident.

READ more...  Attack on Jakir Hossain a 'conspiracy', was being pressured to join another party: Mamata Banerjee

The action against the farmer leaders came as Delhi Police Commissioner SN Shrivastava alleged that several of them made inflammatory speeches and were involved in the violence.

Police said that the role of farmer leaders will be investigated in connection with the violence that left 394 security personnel injured and a protestor dead.

Earlier on Wednesday, an undated video Rakesh Tikait went viral, wherein he is seen asking and appealing to his supporters to be armed with lathis for the Republic Day tractor rally, and be prepared to save their land. In the video, Tikait could be heard saying “The government is not listening. Come with your sticks and flags.” After a pause, Tikait is asking his supporters to ‘understand his words, come along with tiranga atop lathis’.