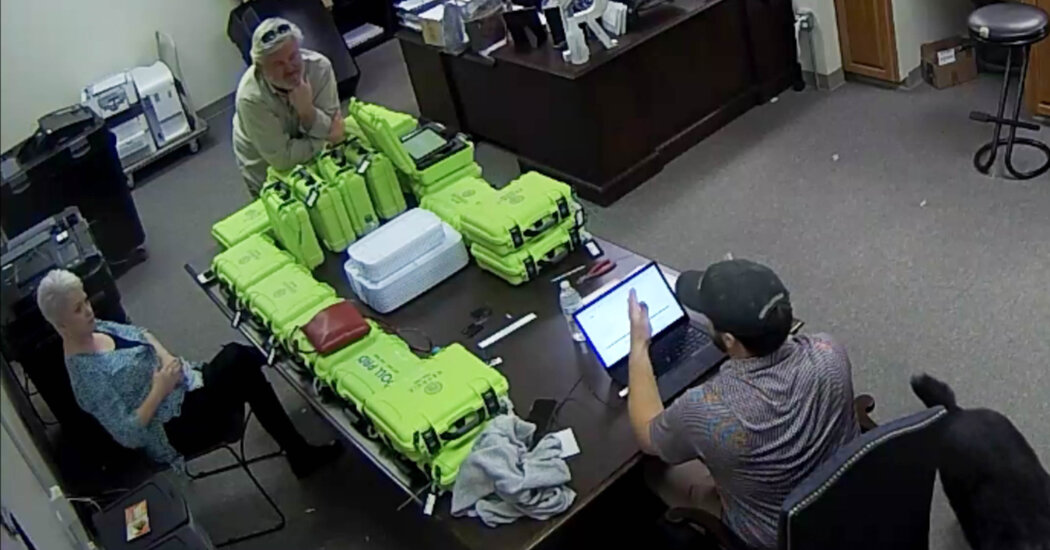 The footage raises new questions about efforts by Trump affiliates in a number of swing states to gain access to and copy sensitive voting software after the 2020 election.

Newly released videos show allies of former President Donald J. Trump and contractors who were working on his behalf handling sensitive voting equipment in a rural Georgia county weeks after the 2020 election.

The footage, which was made public as part of long-running litigation over Georgia’s voting system, raises new questions about efforts by Trump affiliates in a number of swing states to gain access to and copy sensitive election software, with the help of friendly local election administrators. One such incident took place on Jan. 7 of last year, the day after supporters of Mr. Trump stormed the Capitol, when a small team traveled to rural Coffee County, Ga.

The group included members of an Atlanta-based firm called SullivanStrickler, which had been hired by Sidney Powell, a lawyer advising Mr. Trump who is also a conspiracy theorist.

“We are on our way to Coffee County, Ga., to collect what we can from the election/voting machines and systems,” one of the company’s executives, Paul Maggio, wrote Ms. Powell on that January morning. Weeks later, Scott Hall, an Atlanta-area Trump supporter and bail bondsman who also traveled to Coffee County, said “we scanned every freaking ballot” in a recorded phone conversation.

Mr. Hall said the team had the blessing of the local elections board and “scanned all the equipment, imaged all the hard drives and scanned every single ballot.”

The new videos show members of the team inside an office handling the county’s poll pads, which contain sensitive voter data. (The cases holding the equipment in the footage are labeled with the words “POLL PAD.”) In a court hearing on Sept. 9, David D. Cross, a lawyer for a nonprofit group that is suing over perceived security vulnerabilities in Georgia’s voting system — and that released the new videos after obtaining them in its litigation — told a judge that his group suspected that the “personally identifiable information” of roughly seven million Georgia voters may have been copied.

Charles Tonnie Adams, the elections supervisor of Heard County, Ga., said in an email that “poll pads contain every registered voter on the state list.” It was not immediately clear what specific personal information about voters was on the poll pads, or what, if anything, was done with the data.

Mike Hassinger, a spokesman for Brad Raffensperger, Georgia’s secretary of state, said a poll pad “does have voter information but it’s not accessible because it’s scrambled behind security protocols.” He added that there were no driver’s license numbers or Social Security numbers on poll pads at the time.

The new videos also show that some of the Trump allies who visited Coffee County were given access to a storage room, and that various people affiliated with Mr. Trump’s campaign, or his allies, had access to the building over several days.

The new footage also shows Cathy Latham, then the head of the county’s Republican Party, with members of the Trump team, standing together in an office where the county’s poll pads were laid out on a table. Ms. Latham is among the targets of a criminal investigation in Atlanta, related to her participation as one of an alternate slate of electors who tried to overturn Mr. Trump’s loss in Georgia. That investigation, which is being led by Fani T. Willis, the district attorney of Fulton County, has also touched on what took place in Coffee County.

In a court filing late Monday evening, the plaintiffs in the civil case assailed what they called “the persistent refusal of Latham and her counsel to be straight with this court about the facts.” They accused her of downplaying her involvement with the Trump team when “she literally directed them on what to collect in the office.”

Robert D. Cheeley, a lawyer for Ms. Latham, declined to speak on the record on Monday. This month, he told CNN that his client “would not and has not knowingly been involved in any impropriety in any election.”

Mr. Hassinger said the secretary of state’s office had “no idea” why its investigators were at the elections office in Coffee County in early January.

“We are looking into it,” he said. “Again, we take this very seriously. This investigation is a joint effort between the secretary of state’s office and the Georgia Bureau of Investigation, and if it’s determined that people have committed a crime, they’re going to be prosecuted to the fullest extent of the law.”

Mr. Hassinger added that at that time, the secretary of state’s office was looking at “vote-counting procedures when Coffee County was unable to certify the results of their election by the time of the deadline.”

In a statement on Tuesday morning, SullivanStrickler said that it had received a subpoena from a special grand jury in Fulton County convened by Ms. Willis.

“We can confirm that SullivanStrickler is not a target of the Fulton County special grand jury’s investigation,” the statement said. “Our firm and our employees are only witnesses in this matter. We will continue to fully cooperate with law enforcement.”

Reached by phone on Monday, Rachel Ann Roberts, the current election supervisor for Coffee County, said she could not comment on the matter of the poll pads because she had started the job after the visit took place.

Georgia is hardly the only state where such activity occurred. In Michigan, a special prosecutor is investigating efforts by Trump allies, including the Republican candidate for attorney general, Matthew DePerno, to gain access to voting machines. And in Colorado, the secretary of state’s office estimated that taxpayers faced a bill of at least $1 million to replace voting equipment in Mesa County after a pro-Trump elections supervisor was indicted on charges that she tampered with the county’s voting equipment after the 2020 election.