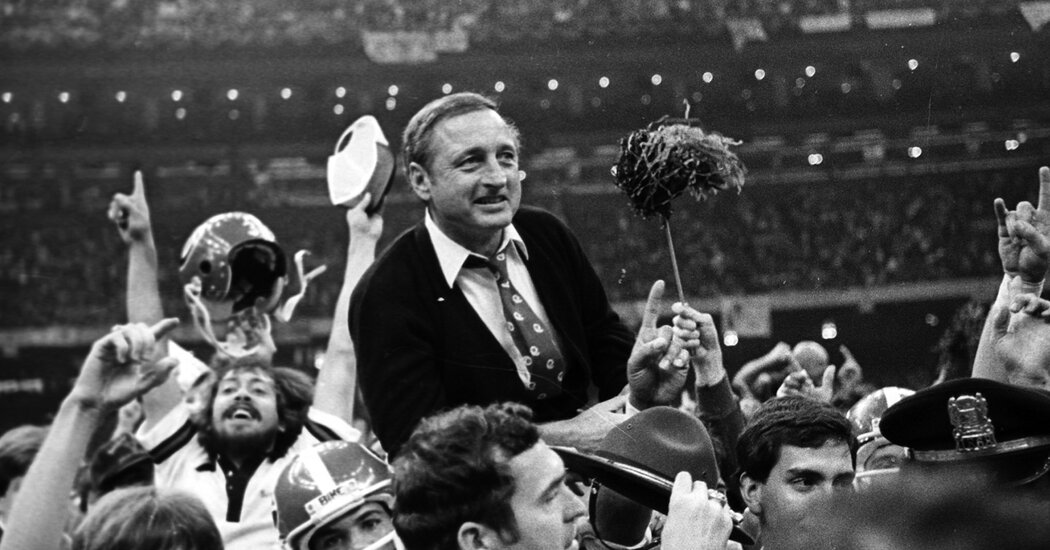 In a 25-year coaching career, he appeared in 20 bowl games and won 201 games, the fourth-highest total in Southeastern Conference history.

Vince Dooley, a Hall of Fame football coach at the University of Georgia who in 25 years won more games than any other coach did in the school’s history, died on Friday at his home in Athens, Ga. He was 90.

His death was announced by the university. No cause was given, but Dooley had recently been hospitalized.

Dooley was only 31 and had no experience as a head coach when he was hired to coach the Georgia Bulldogs in 1963. Before that, he was the quarterback coach for five years and then the head freshman coach for three years at Auburn University, his alma mater. The new role at Georgia was a surprising choice, and he knew it. “My qualifications were such there’s no way I would’ve hired myself,” he told the university’s newspaper, The Red & Black, in 2014.

When Joel Eaves, Georgia’s athletic director, introduced Dooley at a news conference, he said, “This is Vince Dooley, and the only thing I can promise is that he won’t panic.”

Dooley did more than just keep his cool. When he retired after the 1988 season, he had a record of 201-77-10, and his teams had made 20 bowl appearances and won six Southeastern Conference titles, with only one losing season. He had the fourth-highest total of victories in conference history, behind Bear Bryant, Nick Saban and Steve Spurrier.

He was elected to the College Football Hall of Fame in 1994.

Pat Hodgson, who played and coached for him, cited one reason for Dooley’s success in an interview with the magazine Georgia Trend in 2001.

“He was a great organizer,” Hodgson said. “He prepared for every possibility. That’s why we won so many games in the fourth quarter. We had coaches’ meetings before practice, after practice and again after dinner. It was detail, detail, detail.”

Dooley won his only national championship and was chosen as coach of the year when the Georgia Bulldogs went 12-0 in the 1980 season and defeated the University of Notre Dame, 17-10, in the Sugar Bowl. The team’s star player that season was the freshman running back Herschel Walker, who rushed for 1,616 yards and 15 touchdowns. Walker went on to win the Heisman Trophy in 1982 and have a long and productive professional career; he is currently the Republican candidate for the U.S. Senate from Georgia.

Dooley, a conservative Democrat who considered running for the Senate in 1985 and governor of Georgia in 1990, recently endorsed Walker.

When Dooley retired as coach in 1988, he also retired as athletic director, but he agreed to stay until a successor was named. None was found, and he ended up being, in effect, his own successor.

He encountered problems while serving in that position in 1985, when the National Collegiate Athletic Association placed the Georgia football and men’s basketball teams on probation because of the actions of boosters, one of whom had helped an athlete get a loan for a car and later paid off the loan when he fell behind on his payments. Then, in 1986, the Georgia Board of Regents found academic abuse in the admission and advancement of athletes.

The problems returned in 2003, when Dooley withdrew his men’s basketball team from the conference tournament and suspended its coach, Jim Harrick, after an internal investigation showed that three players had received fraudulent grades in a class taught by Harrick’s son, Jim Jr., an assistant coach. The elder Harrick resigned under pressure, and his son was fired. The N.C.A.A. placed Georgia on probation for four years.

In 2001, Dooley told Georgia Trend how he had survived those difficulties.

“You have to keep faith in yourself, rise above what people may say about you, analyze criticism and make adjustments when they’re justified,” he said. “Sports stirs great passion in people, and they may say unkind things when they may not really mean them.”

Under Dooley, Georgia’s athletic program became one of the most successful in the nation. In addition to the football team’s success, Georgia won N.C.A.A. championships in swimming, golf, tennis and gymnastics.

Dooley stepped down as athletic director in 2004.

Vincent Joseph Dooley was born on Sept. 4, 1932, in Mobile, Ala. At 5-foot-9 and 150 pounds, he was a high school all-state player in football and basketball at McGill High School, he and went on to excel in both sports at Auburn.

For his entire career, Dooley remained focused on academics as well as sports. At Georgia, he audited classes in history, art history, political science and horticulture, which was a particular interest of his. A hydrangea was named for him, and the garden in his yard had more than 1,000 kinds of flowers and shrubs.

He toured gardens in England twice with Georgia horticulture professors. One of them, Allan Armitage, told The Associated Press in 2002: “Vince Dooley is probably one of the most accomplished, Renaissance-type persons I’ve ever known. When he decides to learn about something, he learns it.”

Dooley lived long enough to see Georgia win another championship in last year’s title game, when the Bulldogs defeated Alabama’s Crimson Tide, 33-18. His death came just one day before Georgia, which is ranked No. 1 in the country, faced one of its biggest rivals, the Florida Gators.

In 2019, the football field at Sanford Stadium in Georgia was renamed Dooley Field.

He is survived by his wife of 62 years, Barbara Ann (Meshad) Dooley; two sons, Daniel and Derek; two daughters, Deanna and Denise; 11 grandchildren; and three great-grandchildren. His brother, Bill, a former head football coach at the University of North Carolina, Virginia Tech and Wake Forest University, died in 2016; his sister, Rosezella Dooley Zakrzewski, died this year.

Dooley once summed up his career this way:

“I’ve had an exciting life, and I’ve never felt like I’ve been at work. It’s been a lifetime of thrills.”

Frank Litsky, a longtime sportswriter for The Times, died in 2018. Peter Keepnews and The Associated Press contributed reporting.

Akshay Kumar comes in support of Govt, after Rihanna’s tweet on farmers protest

Jacob deGrom Is Sharp for Mets in Return From Injury

Why the U.S. Offered to Swap Griner for Bout, a Russian Arms Dealer