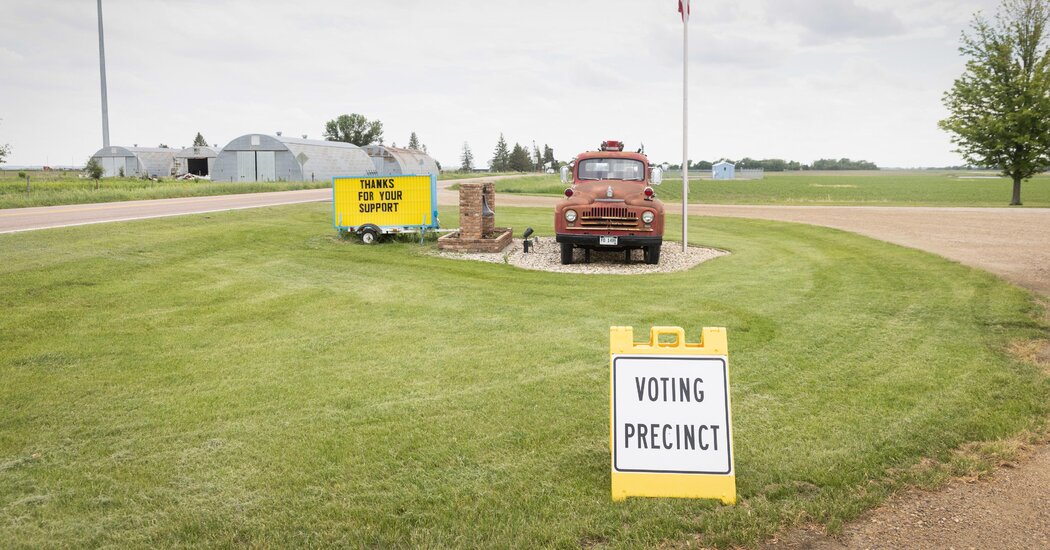 CONDE, S.D. — Progressives have helped bring health coverage to tens of thousands of uninsured Americans with an exercise in direct democracy: They have persuaded voters to pass ballot measures expanding Medicaid in six states where Republican elected officials had long been standing in the way.

An unlikely coalition of farmers, business leaders, hospital executives and clergy members has coalesced around Amendment D, a ballot measure that would enshrine Medicaid expansion in the South Dakota Constitution, over the objections of Gov. Kristi Noem, a Republican. It is widely expected to pass next week on Election Day.

It has been 10 years since the Supreme Court ruled that states did not have to expand Medicaid — the government health insurance program for low-income people — under the Affordable Care Act, and the politics around the issue have shifted. Philosophical objections to large government programs are giving way to economic considerations, particularly in rural states like South Dakota, where struggling hospitals and nursing homes are eager for federal reimbursement dollars that come from Medicaid.

If Medicaid expansion is adopted in South Dakota — a state where Donald J. Trump won more than 60 percent of the vote both times he ran — advocates say it will send a strong signal to other Medicaid expansion holdouts, like Texas and Florida. South Dakota is one of 12 remaining states that have not expanded, down from 19 in 2016.

“It is harder and harder for conservative politicians to stand behind the idea that the A.C.A. is just one lawsuit away from being repealed or overturned,” said Kelly Hall, the executive director of the Fairness Project, a national nonprofit that is behind the “Yes on D” campaign.

“Our work,” she said, “is about how do we build odd-bedfellows coalitions delivering the message that Medicaid expansion is good for the economy, brings back tax dollars to the states, is helpful for small businesses and is not just ‘Do you support Obamacare?’”

In the tiny farming town of Conde, where a road sign puts the population at 140, that is exactly the argument that Doug Sombke, the president of the South Dakota Farmers Union, is making.

Nationally, an estimated 2.2 million uninsured American adults fall into the Medicaid “coverage gap” because they live in one of the 12 states that refuse to expand the program. Too poor to qualify for subsidized private insurance through the Obamacare exchanges yet not poor enough for Medicaid, they rely on charity care — or skip care altogether.

South Dakota officials estimate that 42,500 people would be newly eligible for Medicaid under an expanded program. Some of them are people Mr. Sombke represents. “Farmers and ranchers,” he said, “are small-business men, and they just can’t afford insurance.”

Four rural nursing homes have already closed this year in South Dakota, and a fifth is set to close by the end of this month. Additional federal reimbursement dollars, Mr. Sombke said, might help forestall future closures and prevent people in rural areas from having to drive 60 miles or more for care.

He cited a state legislative analysis showing that South Dakota would save $162 million over five years by expanding Medicaid. Using numbers contained in that analysis, proponents of Amendment D have calculated that during the first year of the program, $328 million would flow back into the state from the federal government.

Medicaid, created in 1965 under President Lyndon B. Johnson to provide health coverage to the poor, is jointly financed by states and the federal government. The Affordable Care Act, passed in 2010, initially required states to expand Medicaid to cover nearly all adults with incomes up to 138 percent of the poverty level, currently around $19,000 for an individual and $38,000 for a family of four. But the Supreme Court struck down the requirement in 2012.

Congress intentionally made expansion a good deal for states, as the Affordable Care Act requires the federal government to pick up 90 percent of the cost for patients enrolled in the expansion program. When Congress passed the $1.9 trillion coronavirus relief package last year, it increased the incentives for states by offering an additional federal match for two years.

Those new incentives have “reignited some of the discussion around expansion,” said Robin Rudowitz, an expert on Medicaid at the nonpartisan Kaiser Family Foundation. “Republicans who had not supported expansion for a long time are starting to think about it.”

Among them is Greg Jamison, a South Dakota state representative and self-described fiscally conservative Republican who had previously opposed expanding Medicaid. Mr. Jamison represents part of Sioux Falls, which is home to two of the state’s largest health care organizations, Sanford Health and Avera Health. Both back Amendment D.

Opponents of the ballot measure say the health systems, which have poured money into the campaign to pass it, do not need federal help. They note that the former chief executive of Sanford Health, who stepped down in 2020 amid controversy over his statement that he would not wear a mask after recovering from Covid-19, received a hefty payout, which Mr. Jamison acknowledged “doesn’t look good.”

But the lawmaker said his discussions with uninsured relatives — “conversations that are bigger and more serious than any I’ve ever had,” he said — led him to conclude that expanding Medicaid was the right thing to do. Mr. Jamison also views expansion as a way to support new mothers in South Dakota, where abortion became illegal, with very limited exceptions, after the Supreme Court overturned Roe v. Wade in June. Now he appears in an ad for the proponents.

“This is a risky conversation, since it’s not in our platform,” Mr. Jamison said over breakfast at a diner in downtown Sioux Falls. “But it just makes sense. It’s time to get over it.”

The South Dakota ballot initiative would require the state to expand Medicaid eligibility by July 1, 2023. Ms. Noem, a rising star in the Republican Party who is running for re-election in a surprisingly competitive race, has said that if Amendment D passes, she will carry it out.

Opponents, including the conservative group Americans for Prosperity, argue that Medicaid needs to be overhauled, not expanded. Keith Moore, the group’s South Dakota director, said that giving free health care to able-bodied people would discourage them from working and would hurt the truly needy by creating long lines for doctors.

But advocates say South Dakotans who need health care are already working; the state’s unemployment rate is 2.3 percent, the lowest figure in more than a decade. The prospect of new jobs is one reason the board of the South Dakota Chamber of Commerce and Industry voted to back Amendment D in September after a “healthy debate,” said David Owen, its president and chief lobbyist.

“The infusion of money into the health care system will help stabilize and create health care jobs,” he said. “When you look at this in reality, you just have to come to the conclusion that we keep South Dakota money here.”

Proponents of expansion are confident because there has already been a test vote. During the state’s primary election in June, voters rejected a ballot measure that would have required a majority of 60 percent to approve any constitutional amendment. That measure, known as Amendment C, was widely considered an effort by opponents of Medicaid expansion to thwart it.

Once Amendment C failed, donations from Americans for Prosperity and other opponents dried up, said State Senator John Wiik, a Republican leading the fight against expansion. Referring to the state’s major health care organizations, he said, “I kind of feel like I’m up against three big old medical Goliaths, here all by myself.”

A recent survey by South Dakota State University that found 53 percent of likely voters supported Medicaid expansion, 20 percent were opposed and 27 percent were undecided. The coalition backing the amendment, which calls itself South Dakotans Decide Healthcare, has raised more than $3 million, most of it from health care organizations, according to campaign finance filings. Mr. Wiik said his side had raised “absolutely zero.”

“It’s not like the conservatives in South Dakota have just sat around and said, ‘No,’” Mr. Wiik said.

In addition to making an economic case for expansion, advocates have tried to put a human face on the problem of the uninsured by enlisting ordinary South Dakotans to tell their stories.

They include people like Sarah Houska, 29, of Sioux Falls. A single mother of two, she left a job with the state — in which she determined whether people were eligible for Medicaid — to spend more time caring for one of her sons, who has serious health issues. Now, she works part time at a dental office and has no coverage. She also volunteers for the American Heart Association’s team working to pass Amendment D.

“My dad is a die-hard Republican,” she said. “He was so against expansion until my personal situation. When you are faced with it and it’s family, it’s different.”

The ballot initiative strategy, though, has its limits. Of the 12 remaining states that have not expanded Medicaid, just three — South Dakota, Florida and Wyoming — currently allow ballot initiatives. (Mississippi had a ballot initiative process until last year, when it was struck down by the state’s Supreme Court.)

Advocates for expansion say their next target is North Carolina, where the power to take action rests in the hands of lawmakers. Republican leaders in the state’s General Assembly have reversed themselves and now express support for Medicaid expansion — using many of the same arguments about tax dollars and financial incentives that the Fairness Project, the national nonprofit running the campaign for Amendment D, is using in South Dakota.

The group was created by a California health care workers’ union in 2015, when congressional Republicans were still trying to repeal the Affordable Care Act and state expansion efforts were stalled. Ms. Hall, the group’s executive director, said it had not been “nearly as difficult to have a conversation with voters as it would have been with conservative politicians in state legislatures.”

In 2017, Maine voters rebuked their Republican governor, Paul LePage, by passing an expansion initiative, though it took the election of a Democrat, Gov. Janet Mills, to put it in place. In 2018, Idaho, Nebraska and Utah — all states that Mr. Trump had won handily two years earlier — passed ballot measures as well. So did Missouri and Oklahoma in 2020.

“We are six for six, in places that you would not expect,” Ms. Hall said. “None of these places are bastions of progressive organizing.”

All possible support being extended to says to fight Covid-19: Harsh Vardhan