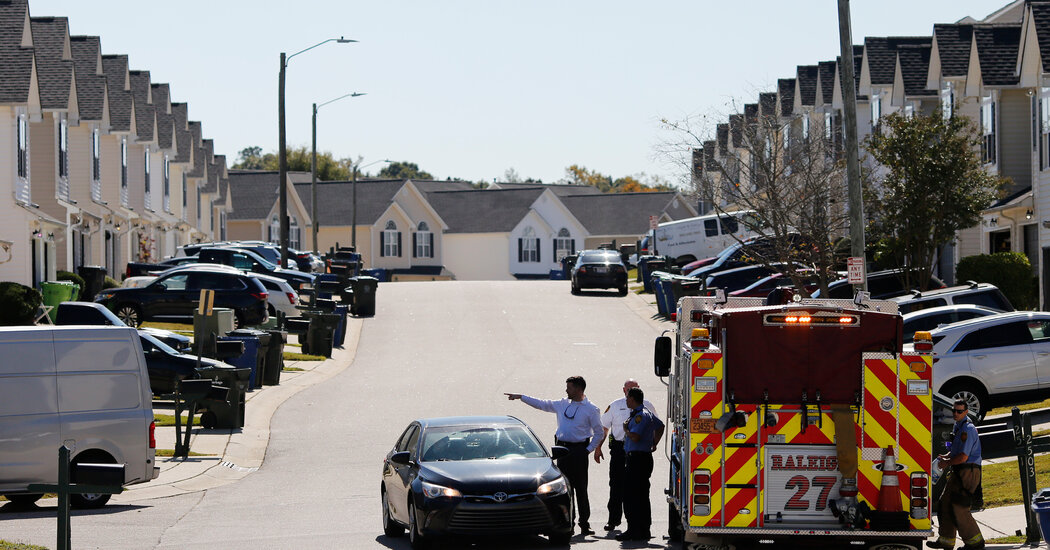 A 15-year-old boy was in custody as investigators searched for a motive in a shooting rampage that killed an off-duty police officer and four others in Raleigh, N.C.

RALEIGH, N.C. — The crime scene in Raleigh on Friday stretched over a span of two miles, through streets of two-story duplexes, ending on a greenway usually packed during the day with people biking or taking their dogs for a stroll.

The day before, the authorities said, an armed 15-year-old boy set off on a rampage through the neighborhood, fatally shooting five people and injuring two others, his path made clear by the victims found scattered behind him. Now, the normally calm neighborhood was crowded with law enforcement officials trying to piece together what had motivated the suspect, who is hospitalized in critical condition.

The burst of violence has plunged Raleigh into a familiar agony as it has become the latest American community forced to grapple with a mass shooting. In the neighborhood that the teenager targeted and across the city, many are now confronting a swirl of painful emotions, including grief over those who were killed and overwhelming anger.

Her daughter, Mary Marshall, 34, was killed late Thursday afternoon as she walked Scruff, her terrier who looked like Toto from “The Wizard of Oz.” She had plans to get married in two weeks, in a small town in the North Carolina mountains. Shortly before she was shot, her mother said, she was on the phone with her fiancé. “I need you to come home right now,” Ms. Marshall had told him, according to her mother. “I’ve heard gunshots.”

An off-duty city police officer was also killed: Gabriel Torres, 29, who lived in the neighborhood and was on his way to work, the authorities said. The other victims included Nicole Connors, 52, and Susan Karnatz, 49, whose husband, Tom, wrote in a tribute on Facebook of their plans to grow old together. “Now,” he wrote, “those plans are laid to waste.”

Local school officials also named James Thompson, 16, as a victim; he was a junior at Knightdale High School. The school was supposed to have its homecoming on Friday, but now it has been postponed.

Two other people were wounded in the shootings, Chief Estella Patterson of the Raleigh Police Department said: a 59-year-old woman who was in critical condition, and a police officer who was treated at a hospital and released.

“Today, we’re sad, we’re angry and we want to know the answers to all the questions,” Gov. Roy Cooper of North Carolina said during a news conference on Friday. “We’ll have to make sense of this infuriating and tragic act of gun violence.”

The suspect, whose identity has not been disclosed by the authorities, was taken into custody after what officials described as a long and tense standoff. It was unclear how and when he had been injured.

WRAL-TV, a station covering Raleigh, reported on Friday that prosecutors planned to pursue a case against him as an adult.

“If the subject does survive, we will be proceeding with the intent of sending it to superior court,” said Lorrin Freeman, the Wake County district attorney, according to WRAL. “In consideration of the mass number of lives lost, it’s appropriate that this case be handled in superior court and this individual prosecuted as an adult.”

The police did not say whether any of the victims knew the assailant, or provide any details about what kind of gun he used.

Friday’s anguish came with a measure of exasperation, with elected officials, relatives of the victims and others in Raleigh and beyond voicing frustration over the prevalence of gun violence in America, particularly mass shootings carried out by young men.

“We all know the core truth: No neighborhood, no parent, no children, no grandparent — no one — should feel this fear in their communities. No one,” Mr. Cooper, a Democrat, said. “As policymakers, we cannot and will not turn away from what has happened here.”

President Biden, in a statement on Friday, called for more legislation, including a ban on assault rifles. He noted that in June, he signed a bipartisan gun bill intended to prevent dangerous people from accessing firearms and increase investments in the nation’s mental health system. The bill — the most substantial federal legislation on guns in decades — was prompted by the massacre in May at an elementary school in Uvalde, Texas, where 19 children and two teachers were killed by an 18-year-old gunman.

“Enough,” Mr. Biden said on Friday. “We’ve grieved and prayed with too many families who have had to bear the terrible burden of these mass shootings. Too many families have had spouses, parents, and children taken from them forever.”

Ginny Marshall’s family is now one of them. On Friday, she, too, urged elected officials to take action. In a phone interview from her home near Raleigh, she acknowledged that people had a right to own guns, but she questioned how a 15-year-old was able to access one.

“Something needs to be done,” she said.

The shooting occurred in the Hedingham neighborhood in the northeast of Raleigh, where homes and golf courses sit near the Neuse River Greenway, a bike and walking trail that winds through wetlands and pine groves. Raleigh has become one of the fastest-growing cities in the country, and many in the neighborhood said Hedingham represented what made the city so attractive, with its strong sense of community and easy access to nature.

“All of us in Raleigh need to come together,” Mary-Ann Baldwin, Raleigh’s mayor, said on Friday. “We need to support those in our community who have suffered a terrible loss.”

The attacks prompted officials to implore residents to stay in their homes or away from the neighborhood as officers began a manhunt. Some residents spent hours waiting on Thursday to get back to their homes, uncertain of what was unfolding and who had been killed.

Shenna Lee, 39, who lives on one of the streets where people were attacked, summed up how many in Hedingham were feeling: “When you normally come home to a quiet neighborhood, with people out walking, talking and having a good time,” she said, “to come home to something like this is heartbreaking.”

“You do feel violated,” James Roberson, the state assemblyman who represents the neighborhood, said of how unsettling it has been to have this kind of violence erupt so close to home. “A lot of these folks have really worked hard to be in a community where they can feel safe, where they can enjoy quality time with their neighbors, their friends.”

He added, “No community is immune from this.”

Pat Schellhammer, 72, was walking in the neighborhood with her granddaughter on Friday morning.

“It’s a bad thing to have to go through in a neighborhood that you thought was safe,” Ms. Schellhammer said, adding. “My husband and I usually walk at that time on the greenway, at that exact time.”

As the day unfurled, neighbors started learning more about who from their community had been killed.

Officer Torres had been with the Raleigh Police Department for 18 months, one part of the life that he and his wife were building together. On Facebook, she shared pictures in the past of his promotion to sergeant in the Marines before he joined the police. In August 2020, he announced on social media the birth of his daughter. “My life is complete,” he wrote along with a series of heart emojis.

Ericka Rios, 39, said she always saw Ms. Connors smiling as she walked through the neighborhood. “That was my friend,” she said, calling her a “sweetheart.”

“She made conversation with just about anybody,” Ms. Rios said, noting that usually, she would socialize with Ms. Connors and another neighbor, the woman who was critically wounded.

Ms. Karnatz’s sister, Sharon Butler Kaivani, described her sister, Susan, as “a wife, a mom to 3 boys, a daughter, a niece, a confidante, an ultrarunner, a reader, an advocate, and so much more.”

“She loved life and nature, and had the most gentle of hearts, protecting even the stray bug that made its way into her house,” she wrote in a post on Facebook. “She loved her family fiercely and there is a big hole there now.”

Ms. Marshall, who grew up in Pensacola, Fla., was jokingly called “the golden child” by her family. She was adventurous and generous, her parents said. “She just used to make us laugh,” Ginny Marshall, her mother, said.

She had spent four years in the Navy. “She wanted to see the world and get an education that way,” her father, Tom, said. She was serving near Fresno, Calif., when she went to a shelter and found Scruff.

“He kind of did pick her out,” her mother said.

The Navy was also how she met her fiancé, Robert Steele. Her mother had just gotten off the phone with him when she spoke with a reporter on Friday.

Ms. Marshall loved her job, as an office manager for a chiropractic clinic. She was busily preparing for her wedding, with Navy friends stationed in Japan about to fly in. She was expecting the arrival of her first nephew in January.

Her mother choked up.

“Everything,” she said, “was going her way.”

Sidharth Shukla wishes to erase this day from the calendar. Can you guess why?