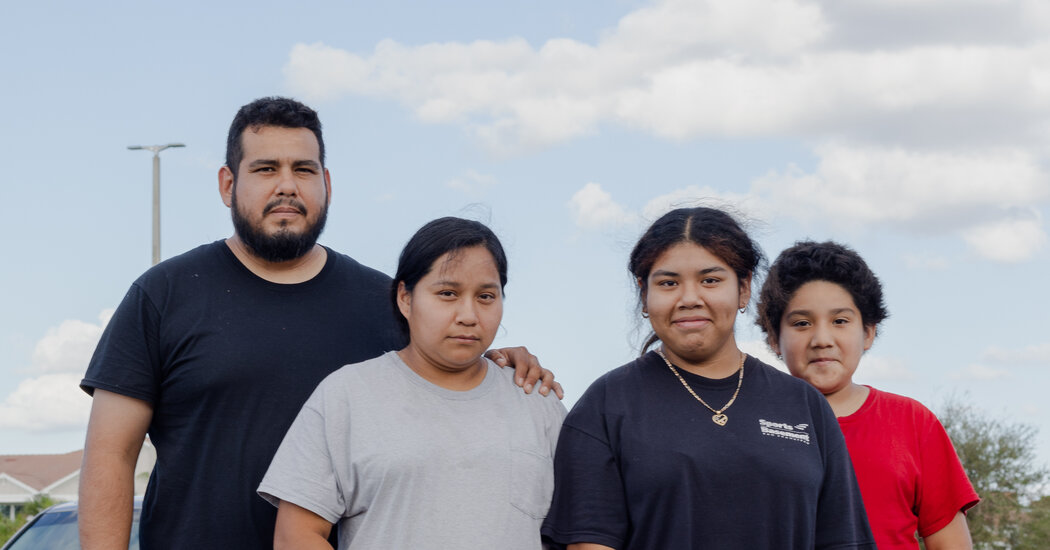 Sleeping on cots and air mattresses are newly homeless service-sector employees, low-income retirees and newcomers to the area with few resources or connections.

ESTERO, Fla. — Irene Peralta and Oscar Garcia first met at the Hertz Arena as teenagers 18 years ago, when it served as an emergency shelter after Hurricane Charley devastated a swath of Southwest Florida in 2004.

They sought shelter there again last month as Hurricane Ian approached, this time as a married couple with three children in tow. Three weeks after the ruinous Category 4 storm made landfall, they are preparing to move with several hundred other displaced Floridians from the arena to a longer-term shelter opening on Wednesday in North Fort Myers, still reeling from extensive damage to their mobile home and searching for options.

As of Tuesday, 476 people remained at two public shelters in Lee County, most of them at Hertz, an ice hockey and concert arena. The county took a direct hit, with 5,041 residential properties destroyed and 13,052 suffering major damage, records show. Many of their occupants have second homes or relatives with a guest room to fall back on, or can secure rental properties while they await federal disaster assistance, insurance adjusters and general contractors to help them begin rebuilding their lives.

But many of the people relying on shelters have none of those options. Sleeping side by side on American Red Cross cots and air mattresses are service-sector employees who are newly homeless and unemployed, retirees dependent on Social Security checks, and newcomers to the region with neither resources nor connections. Many were renters in North Fort Myers and other lower-income areas, barely making it even before Ian.

“I’m just at a standstill,” said Kionna Tobler, a single mother of two young boys. She lived in Pine Manor, a low-income neighborhood in Fort Myers, and did not have a car or formal lease before the storm. Her roommate, who held the lease for the $1,200-a-month rental home, died shortly before Ian hit, she said.

Without a lease, Ms. Tobler is uncertain what help she will receive. Last Friday, she learned that the American Red Cross had assigned her a case manager, who she hoped would call soon.

The Red Cross has been operating the two shelters in Lee County and another in Collier County since early October. The organization has begun connecting shelter residents with case managers to speed up the process of finding them other housing, including rental properties, said Tony Briggs, a Red Cross spokesman.

Representatives of the Federal Emergency Management Agency have been on site at the Hertz Arena; the federal Department of Housing and Urban Development has also been working with families there.

The Aftermath of Hurricane Ian

Long before the storm, the cost of housing in Southwest Florida was a source of gnawing anxiety for many low- and middle-income residents. The metropolitan area that includes Fort Myers saw a 21.6 percent jump in rental prices year over year, the second-largest increase among the nation’s 100 largest such areas, said Shelton Weeks, the Lucas Professor of Real Estate at Florida Gulf Coast University. A typical two-bedroom apartment commands $2,000 a month, he said — a price that will most likely jump because of reduced supply and surging demand after the storm. While that price reflects the national average, it strains the budget for many in the Lee County area, Dr. Weeks said.

Mr. Garcia, his family’s sole wage earner, paid his parents about $800 a month in rent to live in the mobile home they owned.

Buying property may be even more out of the question. Amir Neto, director of the Regional Economic Research Institute at Florida Gulf Coast University, said he had identified just 129 properties for sale in Lee and neighboring Charlotte County for $250,000 or less, and none in Collier.

Ruth Rodriguez, 80, who has been staying at Lee County’s other active shelter, at the Estero Recreation Center, had been renting in the now-destroyed Indian Creek mobile home community near Fort Myers Beach when the storm came through. She had hoped to purchase a home there for well under $100,000.

“The houses were nice, the price was right, and then all this happened,” said Ms. Rodriguez, a widow without relatives to support her. “There’s just nowhere to go.”

She will most likely move to Georgia once she figures out how to buy or lease a car to replace the one she had, which was washed away, she said.

Late last week, some of those staying at the recreation center said they were keeping each other in good spirits.

“We’ll be OK,” said Tracy Salters, 42. She and her husband Darron, 47, moved to North Fort Myers from Pennsylvania just weeks before the storm and were renting a tiny apartment for $2,000 a month until they could become established.

She expects that her housekeeping job will rebound, and her husband continues to work at a flooring company.

At the Hertz Arena, though, the trauma of the storm and the strain of shelter living was getting to people.

“Everyone in here has a story,” noted Barbara Kolc, 78, who narrowly escaped the flood that surged through the Indian Creek mobile home community, where she lived with her husband, Kenneth, 65. “You can tell by the look in their eyes. It’s like a horror movie.”

Ms. Kolc, who recently finished cancer treatment and is awaiting a PET scan to verify that the disease is in remission, was hopeful that the Red Cross would move her and her husband to a hotel.

“I’m keeping a positive attitude,” she said. “Otherwise I wouldn’t be alive. I was saved twice.”

The residents include people who were homeless before the storm, and who have mental health conditions, substance abuse disorders and other medical needs. A team of traveling nurses is tending to them as best as they can, sending people to hospitals and other care centers as needed.

“Yeah, patience is wearing thin,” Mr. Garcia, 32, said. His wife agreed, recounting a fellow shelter resident who had an outburst after their 2-year-old ran into him last week.

“I can’t really get a good night sleep,” he added, noting that his co-workers at a roofing firm have noticed his fatigue.

On Monday, Lee County announced that people at both shelters would be moved to a new location in a former grocery store in North Fort Myers by week’s end. The Florida Everblades, a minor-league ice hockey team that plays at Hertz Arena, has its first game of the season scheduled for Oct. 29.

The Red Cross intends to remain in the region as long as needed and will provide mental health services there, but a state contractor, CDR Maguire, will manage operations.

“Everybody is upset,” she said on Tuesday as she prepared for the move with other shelter residents.

She had hoped to stay in Florida and remain with her new employer, a hotel and resort management company. But apartments are too expensive, based on ads she has seen, or just unavailable. There are no vacant hotel rooms nearby, and she and her husband do not own a car.

“Honestly, I think I’m going to try to convince my husband to go to New Jersey,” she said, explaining that they have family there.

For Ms. Peralta, the announcement was even harder to take. The Hertz shelter is only a few miles from her children’s schools, while the new one is much farther away. She is hoping that she and her husband can repair their mobile home — even if one room at a time — so the children can maintain their routine.

“We just want to go back to our house,” she said.

Republican Susan Wright causes us to be House runoff in Tx

University of Idaho Killings Stump Police: What We Know

Lockdown to keep within Tamil Nadu until 06 fourteen along with reducing associated with...