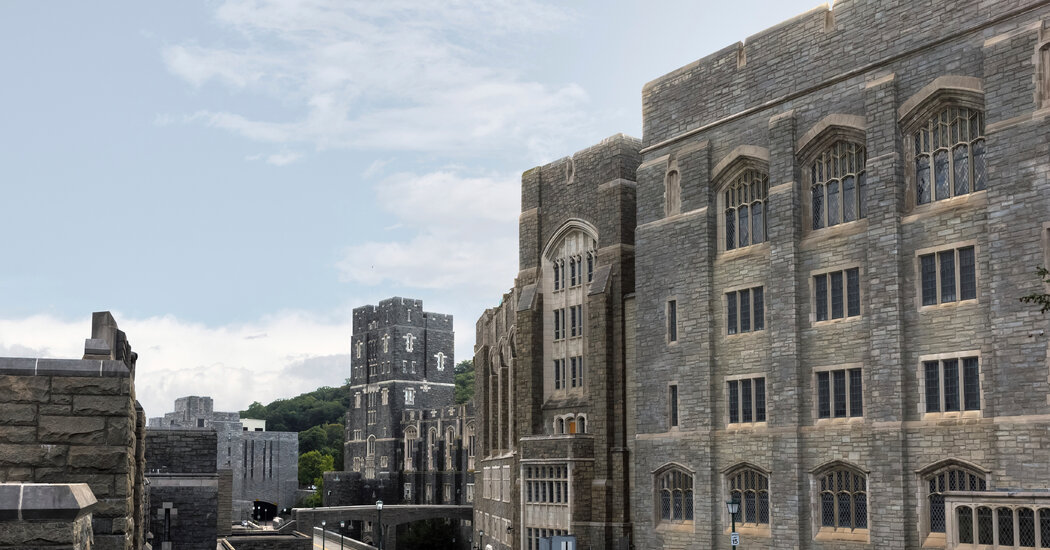 A special congressional commission that recommends the removal of Confederate symbols at U.S. military sites flagged the bronze plaque in a new report.

For decades, the students at the U.S. Military Academy at West Point in New York have walked beneath a panel of three bronze plaques mounted at the entrance of Bartlett Hall Science Center that includes an image of a hooded figure and the words “Ku Klux Klan” written below it, according to findings in a report released by a congressional panel on Monday.

The report from the panel, the Naming Commission, which was created by Congress last year and tasked with providing recommendations for the removal or renaming of Defense Department assets that commemorate the Confederacy, included multiple suggestions regarding paintings, statues and other items at West Point as well as at the U.S. Naval Academy in Annapolis, Md.

But the commission said that recommending the removal of the plaque fell outside of its scope because the Ku Klux Klan, founded by former Confederate soldiers, emerged after the Civil War. The panel flagged the item for review in its report, and included a picture.

A spokeswoman for West Point said the academy is reviewing the recommendations made by the panel and will collaborate with the Defense Department and the U.S. Army to implement the approved changes.

“As a values-based institution, we are fully committed to creating a climate where everyone is treated with dignity and respect,” she said in an email.

“The reason that we put that in there was because we thought it was wrong,” said Ty Seidule, a retired brigadier general who serves as vice chair of the commission, referring to the flagging of the K.K.K. plaque in the report. “When we find something that’s wrong, but it’s not within our remit, we wanted to tell the Secretary of Defense about that.”

The other two plaques above the entrance to the science hall specifically commemorate Confederate figures, including Robert E. Lee and J.E.B. Stuart, the commission found. They were recommended to be modified or removed.

General Seidule, who is also a professor emeritus of military history at West Point, wrote a book last year trying to understand why the Military Academy still displayed a portrait of Lee, who graduated from West Point but resigned his Army commission to fight with the Confederacy. The commission unanimously recommended that the portrait of Lee, in Confederate uniform and displayed in Jefferson Hall Library, be modified or removed.

The Naming Commission, established by the National Defense Authorization Act of 2021 following a national outcry over the killing of George Floyd by the Minneapolis police in 2020, suggested new names last year for nine Army bases that honor Confederate officers. That effort led to the renaming of a street in New York City’s only Army post after a Black officer who died saving other soldiers in Vietnam.

The commission’s first report, released earlier this month, focused on Army bases. A third report, due before Oct. 1, will include recommendations for all remaining Department of Defense assets. The secretary of defense has until Jan. 1, 2024, to implement a plan submitted by the commission.

The commission recommended several monuments, portraits and engraved images that depicted Confederate officers to be removed, relocated, renamed or modified at West Point and the Naval Academy.

The cost estimates to implement the changes at West Point ranged from $1,000, for modifications, to $300,000 for the removal of monuments and engravings at Reconciliation Plaza, which was built in 2001.

Before making its recommendations in its recent reports, the commission examined an inventory, created by the Department of Defense, listing assets throughout the country that were named after Confederate officers or that contained images depicting Confederate officers, General Seidule said.

Senator Kirsten Gillibrand of New York, who co-sponsored a measure that would require the secretary of defense to remove anything that commemorates the Confederacy, said she would work to ensure that Defense Secretary Lloyd J. Austin III implements the commission’s recommendations.

“I am supportive of the findings in the report and will continue working with the Naming Commission and D.O.D. to remove these harmful tributes that uphold the legacy of Confederate leaders who killed thousands of American service members in order to preserve the institution of slavery,” she said in an email. “It’s a disgrace and damaging to our nation.”

Representative Sean Patrick Maloney of New York, whose district covers West Point, and who wrote a letter in 2020 to then Defense Secretary Mark T. Esper arguing for the renaming of military buildings and facilities with Confederate names, said he supports the commission’s unanimous recommendations.

“We cannot allow bigotry of the past to be perpetuated and celebrated in the same halls that educate our leaders of the future,” he said in an email. “It is essential that West Point’s campus and culture be one that is welcoming to students of all backgrounds.”

Aaj Ki Baat LIVE | Politics over how EVMs from a polling booth in...