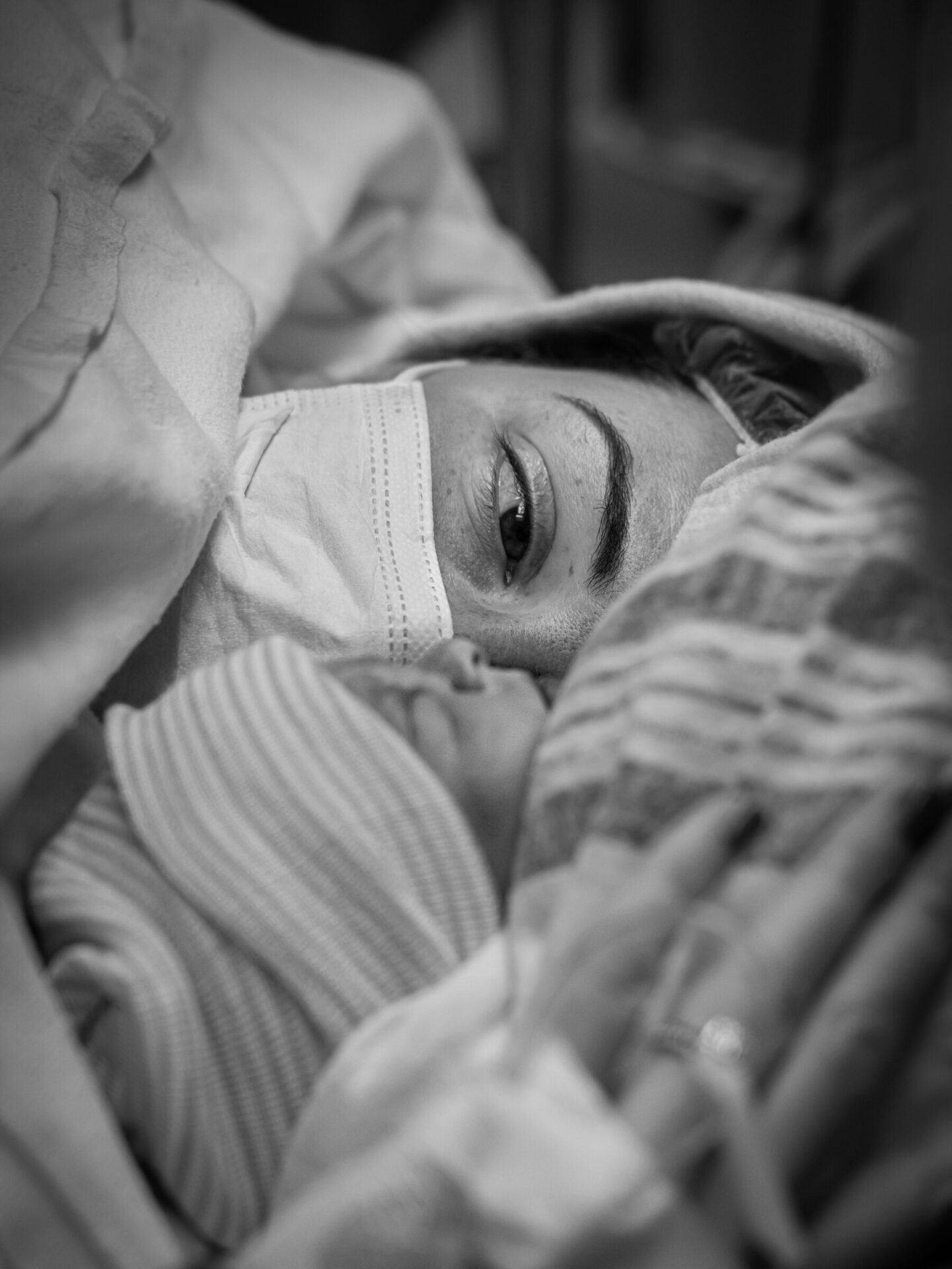 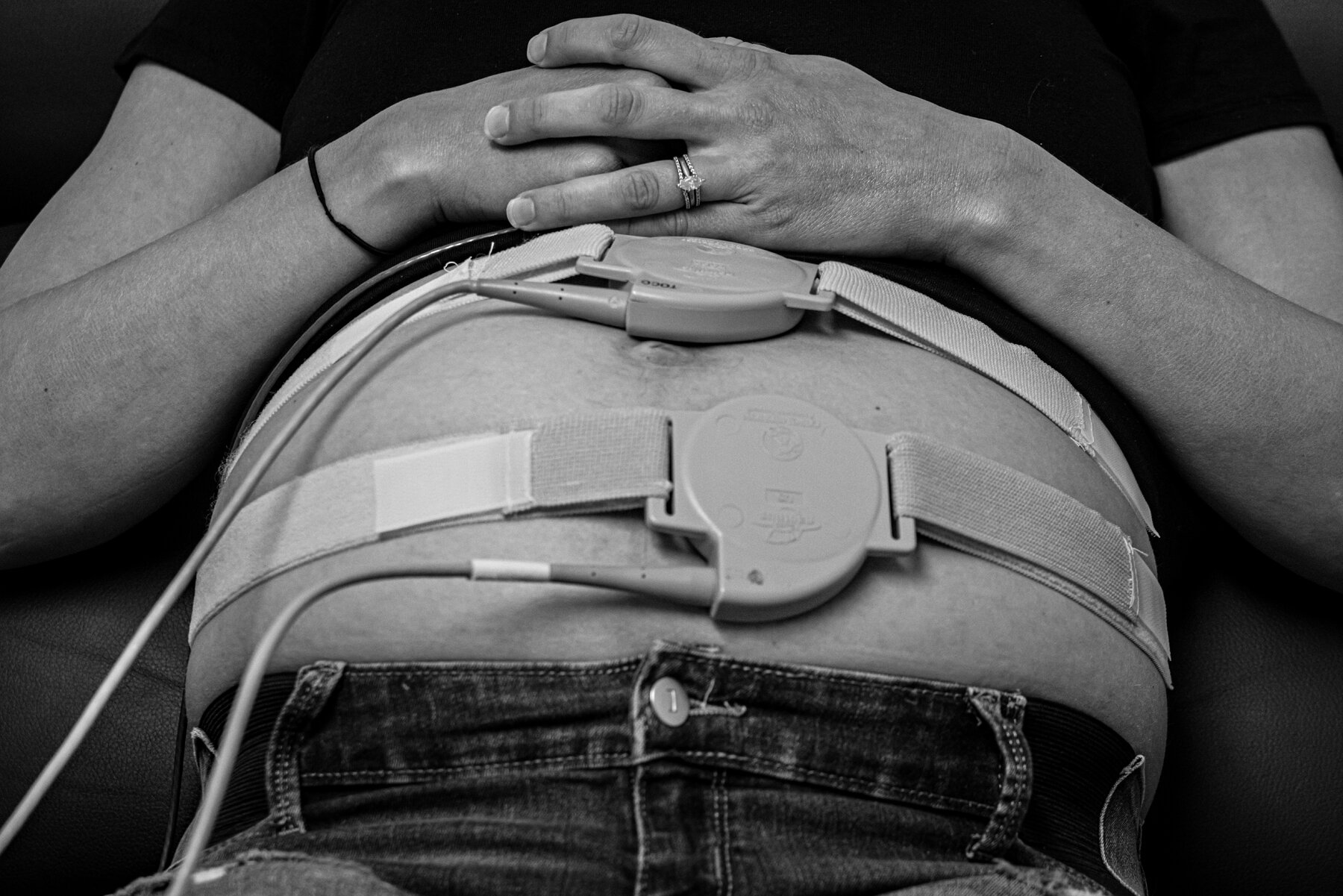 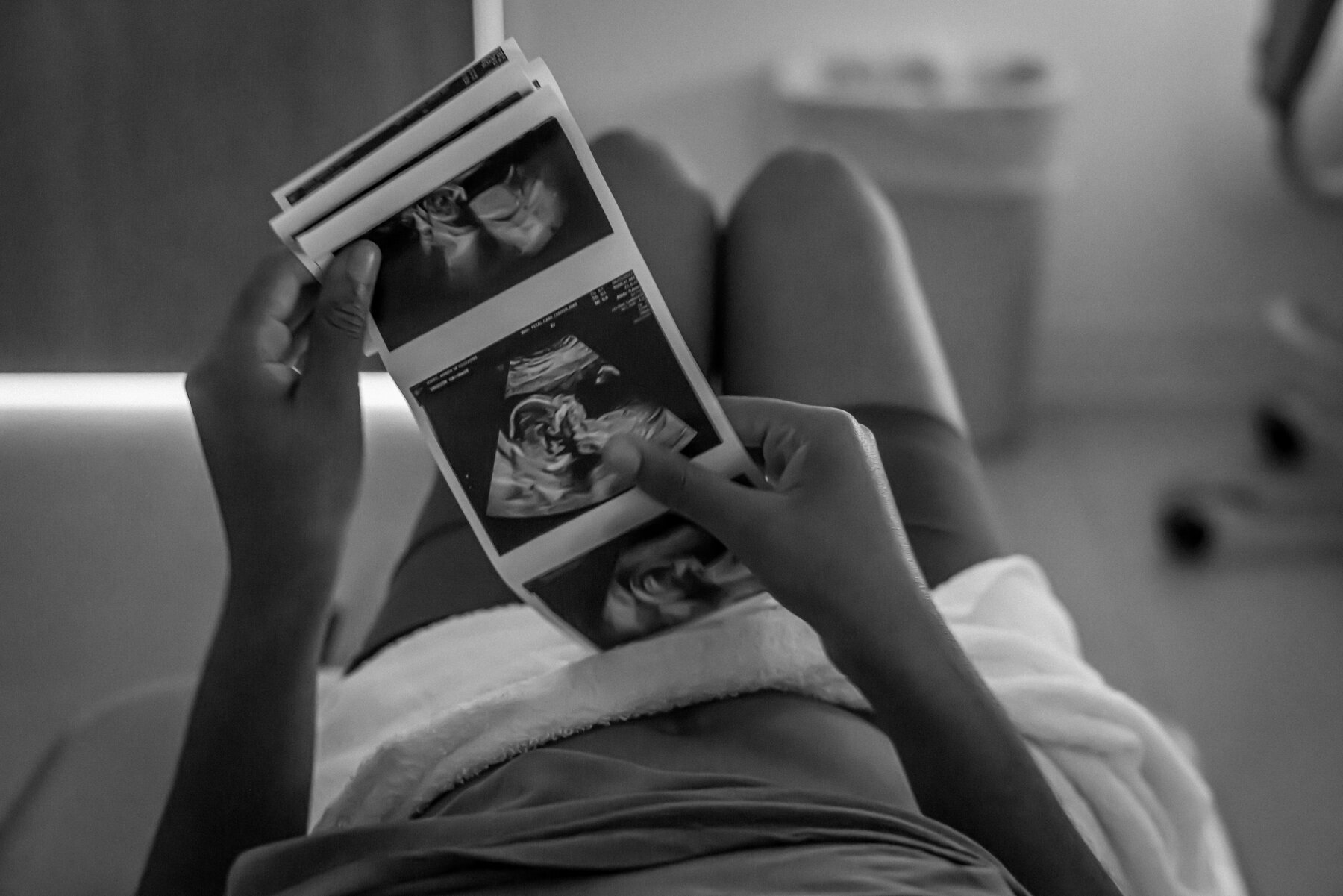 The Cleveland Clinic offers some of the best care for high-risk pregnancies in America.

But the overturning of Roe v. Wade has drastically changed the options for doctors in states like Ohio.

Pregnancy can be dangerous — occasionally fatal — for both women and the fetuses they hope to deliver. Fetal conditions, like a nonviable twin that threatens the health of its sibling, can also imperil the mother. So can disorders like cancer, heart disease, kidney dysfunction, diabetes and lupus. Even something as straightforward as age — becoming pregnant when younger than 17 or older than 35 — or carrying twins or having a history of multiple miscarriages can put women and pregnancies in jeopardy. That’s why so many obstetricians regard the ability to terminate a pregnancy as essential: Doctors need access to abortion procedures to be able to provide care and save lives.

Catrina Rainey and James Packwood and their 9-year-old son at home, in August, one month before her due date. In May, Catrina learned that one of the twins she was carrying had a severe birth defect of the brain that meant it was unlikely to live past six months outside the womb and could, until birth, threaten the viability of the other fetus. A reduction — the termination of an unhealthy fetus to protect a healthy sibling — took place in May. It was one of the last such procedures performed in Ohio, after the state made them illegal, following the Dobbs decision.

The Cleveland Clinic’s maternal-fetal medicine department, one of the largest of its kind in the country, is set up to handle high-risk pregnancies and the dangers that can accompany them. It manages more than 5,000 such pregnancies a year. In August, less than two months after the Supreme Court ruled on Dobbs v. Jackson Women’s Health Organization, overturning Roe v. Wade and abolishing the constitutional right to abortion, the photographer Stephanie Sinclair spent two weeks capturing the newly unsettled world inside the Cleveland Clinic.

Everything changed on the day of the Dobbs decision, June 24. By the end of that Friday, a three-year-old law had been triggered into effect, a so-called “heartbeat bill” that made it a felony to terminate a pregnancy after a fetal heartbeat has been detected. A heartbeat can generally be detected at around six gestational weeks, before many women know they are pregnant; previously abortions were permitted, with restrictions, until 22 gestational weeks. All of a sudden, most of the termination procedures scheduled a week earlier by the Cleveland Clinic were now crimes. Only three exceptions allowed for abortions after the new cutoff: to prevent the mother’s death; to forestall a “serious risk of the substantial and irreversible impairment of a major bodily function of the pregnant woman”; and to respond to ectopic pregnancies, in which a fertilized egg implants itself outside the uterus.

Every morning, OB/GYNs, nurses, the NICU team and pharmacists meet to discuss their patients. Increasingly restrictive abortion laws have created fears that they will not be able to provide necessary care. We “want the best for them emotionally and medically, and the ruling impacts that,” Dr. Tristi Muir says. “Health care decisions can be very complex, and they’re best made between the physician and the patient.”

The uncertainties about how to interpret and deliver care in response to those exceptions meant the Cleveland Clinic personnel had to continue doing their jobs in unclear legal circumstances. How do you know if a mother’s life is at risk? How do you predict, then prove, that the mother faces potentially irreversible bodily damage? “As physicians, we literally take an oath to take care of patients,” says Dr. Stacey Ehrenberg, who specializes in high-risk pregnancies at the Cleveland Clinic. “And we now have our hands tied.”

Once the heartbeat bill became law, routine procedures for treating miscarriage — which is how at least one in 10 pregnancies ends — could be considered abortions. The most effective drugs used in cases of miscarriage, mifepristone and misoprostol, are the same ones used to induce abortion by medication; the surgical evacuation of the uterus is another procedure used with miscarriages that is also an abortion method. The new law means that most patients admitted to the Cleveland Clinic Emergency Department while miscarrying are supposed to wait for 24 hours before receiving treatment — treatment given earlier than that could be considered an illegal abortion. Dr. Ashley Brant, an OB/GYN at the Cleveland Clinic, says that they had a core group of physicians providing abortion care who were well versed in what had been the law. But the new law, she says, “opens up the floodgates of who might be providing this kind of care.” A doctor in the emergency room accustomed to treating miscarriages with certain procedures, for example, could now potentially be breaking the law. That risk threatens to affect medical care.

Dr. Maeve Hopkins with a patient, before an amniocentesis to check earlier indications from a blood test and ultrasound exam that her fetus had Down syndrome. The patient, worried about both the financial strain of caring for a child with special needs and the impact on her daughter, who is almost 2, had already decided she would terminate the pregnancy if the diagnosis of Down syndrome was confirmed, though she would have to travel outside Ohio to do so.

Ohio had been changing the parameters of reproductive care for decades. Doctors are required to ask patients who want and qualify for an abortion if they would like to hear the fetal heartbeat or see an image of it; doctors and other medical providers, including pharmacists, are allowed to withhold medical care based on their moral, religious or ethical beliefs; doctors are required to send an official record to the state health department for every patient who receives a qualified abortion. And every patient who elects to have an abortion must be offered a 21-page booklet titled “Fetal Development & Family Planning.” Those changes happened over the course of many years. The heartbeat bill took effect so quickly that even powerful institutions like the Cleveland Clinic were caught off guard. “I have lived in a restrictive state for almost my entire career and lived through legislative changes along the way that have restricted access, but not to this sweeping extent,” says Dr. Justin Lappen, who is the head of maternal fetal medicine at Cleveland Clinic.

Lappen, Brant and a lawyer for the clinic held an emergency meeting the Monday after the Supreme Court’s decision, in order to convey medical and legal guidance to the more than 600 doctors, nurses and administrators who attended remotely. “Everyone was really emotional and upset that this was actually happening,” Dr. Amanda Kalan, a specialist in maternal fetal medicine, says. “The people making the laws are not doctors, and they don’t understand the implications of all of these laws.”

Megan Keeton, 31, immediately after a cesarean-section delivery. Complications from two earlier pregnancies — one resulting in a stillbirth, the other in the birth of her daughter, Aryia, now 7, who has spastic quadriplegia cerebral palsy — led doctors to tell Jones she should not become pregnant again because of the risks to her health. (She had a stroke soon after her daughter’s birth.) But just before she was going to make an appointment to get her tubes tied late last year, she found out she was pregnant for a third time. “I was asked if I wanted to have an abortion, and I said no,” Jones says.

Elizabeth Whitmarsh, the communications director for Ohio Right to Life, which lobbied for the heartbeat bill, denies that the bill itself is responsible for any adverse ramifications. “The only thing that is not legal in Ohio now is the murder of a child,” she says, when asked about the bill’s repercussions. The Ohio state representative Adam Holmes, along with Congressman Steve Chabot and former Gov. John Kasich, did not respond to requests for comment.

On July 11, two and a half weeks after the Dobbs decision, an Ohio representative named Gary Click introduced a two-sentence “personhood” bill that would further limit abortion. The bill is meant to “protect the constitutional rights, of all unborn human individuals from the moment of conception,” unless the life of the mother is endangered. At the moment, Lappen says, “We have some patients who at five or six weeks may still be able to have abortion care if there’s not a heartbeat detected.” But if this bill becomes law, he adds, “then there really would be virtually no abortion care left on the table in Ohio.”

Mary Lynch, 36, with her children, at a checkup with Dr. Stacey Ehrenberg. Lynch’s previous pregnancy resulted in a baby with a fatal genetic anomaly. “After two days, we couldn’t let him suffer anymore, so we moved him into comfort care, where they gave him lots of morphine and I held him for hours,” Lynch says. After learning that there was a 25 percent chance the same condition would appear in future pregnancies, she and her husband opted for in vitro fertilization so that the embryos could undergo genetic testing. But Lynch worries that if the “personhood bill” passes in Ohio, it could have an impact on I.V.F., which often requires discarding fertilized embryos; if that happens, Lynch plans to go to Illinois for any future I.V.F. treatments.

Dr. Maeve Hopkins, an OB/GYN who specializes in high-risk pregnancy at the Cleveland Clinic, grew up outside Cleveland and returned to the city after working in Pennsylvania and North Carolina. She now questions her move home. “I don’t know an OB/GYN in Ohio who isn’t thinking about leaving,” she says. U.S. News & World Report currently ranks Cleveland Clinic’s obstetrics and gynecology care as the fourth-best in the nation, but Dr. Tristi Muir, the chairwoman of the OB/GYN and Women’s Health Institute there, points out that this status — and, even more important, the quality of women’s health care available to Ohioans — has become vulnerable: “Doctors may not come to our state to practice or to train.”

Sarah Stacy at home in a nursery she had prepared for a pregnancy that ended in abortion. A scan during her 12th week revealed that her fetus had cystic fluid around the head and neck and birth defects of the heart and brain. If she carried the fetus to term, she was told, it would survive anywhere from only a few hours to a few days. It is illegal in Ohio to terminate a pregnancy because of birth defects, so Stacy had to travel by herself outside the state for the procedure. “I found out it was a girl too,” Stacy says. “And I have two boys at home. So, it’s like, this was my girl. She was planned.”

Stephanie Sinclair is a Pulitzer Prize-winning photographer known for her focus on human rights issues. She founded Too Young to Wed, a charitable organization that seeks to empower girls and end child marriage globally. Jaime Lowe is a frequent contributor to the magazine and the author of the “Breathing Fire: Female Inmate Firefighters on the Frontlines of California’s Wildfires.”