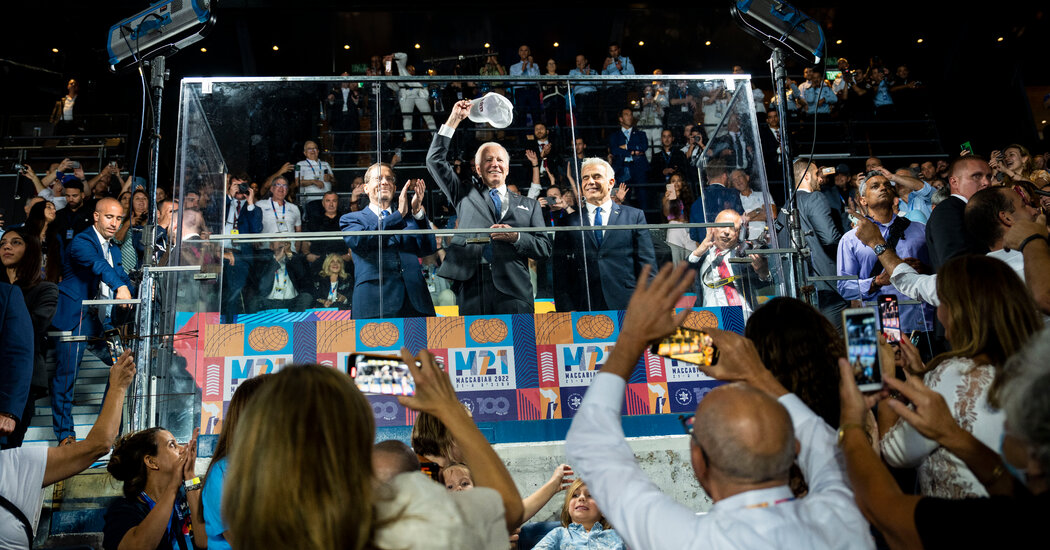 The Maccabiah Games, which President Biden attended on Thursday evening, are Israel’s biggest sporting event, often referred to as the Jewish Olympics.

The event is open to Jewish athletes from all over the world, as well as Israeli athletes of any religion. About 10,000 athletes from over 60 countries arrived in Israel this week to compete in the games, making it one of the largest sporting events in the world.

The 21st Maccabiah — named for an ancient Jewish warrior, Judah Maccabee — began on Tuesday and is taking place over a two-week period in dozens of venues across the country.

On Thursday, holding a white U.S.A. cap, Mr. Biden smiled and waved as the U.S. delegation entered the opening ceremony at the Teddy Stadium in Jerusalem, to the soundtrack of Miley Cyrus’s “Party In The U.S.A.”

The United States is represented by 1,400 athletes, making it the largest foreign delegation. Russia and Belarus withdrew from this year’s event before the organizing committee had decided whether to bar the Russian delegation from competing because of the Russian invasion of Ukraine, according to a spokesman for the Games.

The first Maccabiah Games took place in 1932 in Mandatory Palestine, as the region was known when under British control. The goal was to give Jewish athletes, who sometimes faced antisemitic restrictions on sporting activity, the chance to compete at a high level, and to “glorify the sports achievements of Jewish youth,” according to the organization.

In the following years, amid rising antisemitism in Europe, many participants would resettle in Mandatory Palestine after the event.

The Games have since continued to serve as a pipeline to Israeli citizenship, with over 5 percent of participating athletes seeking such a status after the event, according to the government. Maccabiah presents “a golden opportunity to encourage aliyah” — or Jewish immigration to Israel — Pnina Tameno Shete, the minister for aliyah and integration, said in a statement this week.

One of the most prominent examples was Tal Brody, a United States-born basketball star who gave up a promising N.B.A. career after winning a gold medal at the Games with the United States in 1965. He soon immigrated to Israel and played for Maccabi Tel Aviv, a major Israeli basketball team, later leading them to a European title.

Washington Hears Echoes of the ’50s and Worries: Is This a Cold War With...