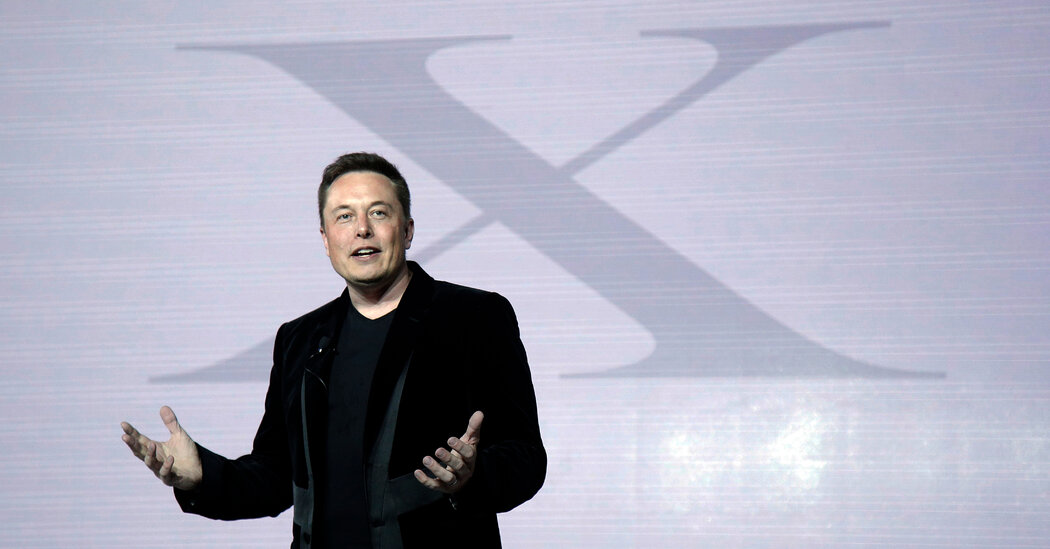 The letter X has had significance in the billionaire’s life, from his early days as an entrepreneur to his personal life and now to his pursuit of Twitter.

Elon Musk proposed on Monday to acquire Twitter at $54.20 a share, a surprise return to his original $44 billion deal with the company after months of trying to terminate it. In April, as the acquisition came together, Mr. Musk said he wanted to own Twitter so people could speak more freely on the platform.

On Tuesday, though, Mr. Musk shared another motivation for buying the social media company, tweeting: “Buying Twitter is an accelerant to creating X, the everything app.”

Mr. Musk, the richest man in the world and the chief executive of the auto company Tesla, has been thin on details about what an “everything app” would look like. But he has expressed interest in making a worldwide social media platform modeled after WeChat, which is owned by the Chinese technology giant Tencent.

In China, WeChat is used by more than a billion people as an all-in-one social media, instant messaging and mobile payment app. Used to order food, hail cabs and find news, it is sewn into the fabric of daily life. Mr. Musk has said that if enough people worldwide used a similar app to communicate, it could establish a payment system as well.

“I think such an app would be really useful. And just the utility of sort of a spam-free thing where you could make comments, you could post videos — I think it’s important for content creators to have a revenue share,” Mr. Musk said on a podcast in May.

A blockbuster deal. In April, Elon Musk made an unsolicited bid worth more than $40 billion for the social network, saying he wanted to make Twitter a private company and allow people to speak more freely on the service.

The response. Twitter’s board countered Mr. Musk’s offer with a defense mechanism known as a “poison pill.” This well-worn corporate tactic makes a company less palatable to a potential acquirer by making it more expensive to buy shares above a certain threshold.

Securing financing. Though his original offer had scant details and was received skeptically by Wall Street, Mr. Musk, the world’s wealthiest man, moved swiftly to secure commitments to finance his bid, putting pressure on Twitter’s board to take his advances seriously.

Striking a deal. With the financing in place, Twitter’s board met with Mr. Musk in April to discuss his offer. The two sides soon reached a deal, with the company agreeing to sell itself for $54.20 a share — roughly $44 billion in total.

Tensions arise. Not long after Mr. Musk and Twitter reached their agreement, problems began. Mr. Musk threatened to pull out of the deal if Twitter did not provide more information on how it calculates the number of fake accounts. In June, the company announced that it planned to give him access to a large swath of its data.

Musk backs out. In July, Mr. Musk announced that he was terminating the deal, citing the continuing disagreement over the number of spam accounts. Twitter then sued the billionaire to force him to go through with the deal. But Mr. Musk fired back in a legal filing, arguing that the company concealed the true number of fake accounts on its platform, accusing Twitter of fraud.

Preparing for trial. Lawyers for both sides have issued more than 100 subpoenas ahead of a trial that was expected to start in October, mostly targeting tech VIPs. In September, a judge ruled that Mr. Musk could amend his suit to include accusations from a former Twitter security chief who claimed that the company misled the public about its security practices.

A surprise move. On Oct. 4, Mr. Musk proposed a deal to acquire Twitter for $44 billion, the price he agreed to pay for the company in April. An agreement at the original price, which would be a victory for Twitter, could bring to an end the acrimonious legal fight. The judge overseeing the case granted Mr. Musk’s request to postpone the trial, giving him more time to settle his financing.

In August, when a Twitter user asked Mr. Musk whether he had considered creating his own social platform, he replied, “X.com.” Earlier that month, at Tesla’s annual shareholder meeting, Mr. Musk said he had “a pretty grand vision” for X as “something that would be very useful to the world.”

Mr. Musk has not publicly offered a plan or timeline for X. But he has said that, despite not being necessary to create X, “Twitter probably accelerates X by three to five years.” Should Mr. Musk acquire Twitter, it is unclear if he would make X from scratch using parts of Twitter, or turn Twitter into X.

During a question-and-answer session with Twitter employees in June, Mr. Musk said that he viewed the company as a digital town square “essential for a functioning democracy” but that it ought to include as much of the world as possible. To encourage people to use and stay on the platform, it should be more all-encompassing, like WeChat, he said.

In 2020, a Twitter user proposed that Mr. Musk create X “to ensure human survival and progress.” This version of X, the user suggested, would be the parent company of Tesla; SpaceX; Mr. Musk’s brain computer company, Neuralink; and his tunnel construction company, the Boring Company. Mr. Musk called the proposal a “good idea.” Whether X is meant to be a conglomeration of Mr. Musk’s companies, a global WeChat or something else is unknown.

X is also the name of the three holding companies Mr. Musk registered in Delaware to acquire Twitter. If the acquisition takes place, X Holdings I will function as Twitter’s parent company, X Holdings II will buy Twitter and X Holdings III will fund the deal, according to regulatory filings.

What is the history behind X?

Mr. Musk has said he has “a fondness for the letter X.” X is how he publicly refers to his first child with Claire Boucher, the musician known as Grimes, but his history with the letter dates back to at least 1999, when he helped found X.com, an online bank.

In 2000, X.com merged with Confinity, a competing software company. In 2001, Peter Thiel, one of Confinity’s founders, replaced Mr. Musk as X.com’s chief executive, and the company was renamed PayPal.

In 2017, Mr. Musk bought the domain for X.com from PayPal. The website currently directs to a blank white page, save a black lowercase “x” in the upper left corner. A separate page, X.com/x, directs to a page with a lowercase “y,” which is the nickname of Mr. Musk’s second child with Grimes.

When Mr. Musk bought the domain, he tweeted: “Thanks PayPal for allowing me to buy back X.com! No plans right now, but it has great sentimental value to me.”

The plans, it now seems, have to do with “everything.”

T20 World Cup venues could be curtailed from 9 to 5 but too soon...