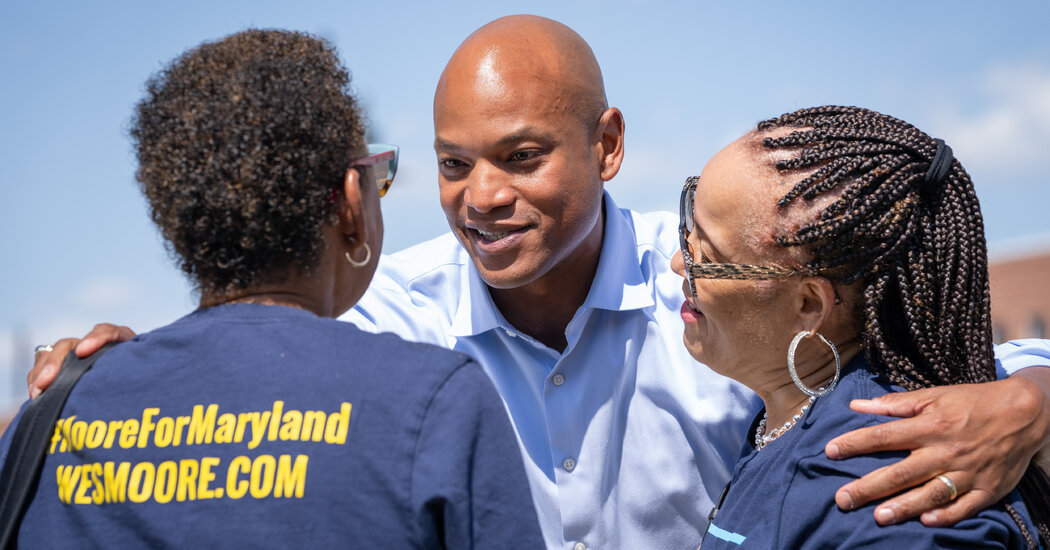 There are close contests in the Democratic and Republican primaries for governor, and in a few House races as the dust settles from redistricting. But the winners could take days to be called.

Marylanders are the only voters going to the polls on Tuesday, choosing major-party candidates for governor and the House of Representatives in the November midterm elections.

For a relatively small Democratic state, Maryland will provide plenty of suspense, quite possibly including a cliffhanger ending, as a delayed counting of mail-in ballots and those returned to drop boxes will most likely put off final results for days.

Here’s what to watch.

The biggest contest is the race to succeed Gov. Larry Hogan, a moderate Republican whose election in 2014 shocked the political establishment and who cannot run again because of term limits. Mr. Hogan became one of the most outspoken voices in the Republican Party in opposition to Donald J. Trump. Democrats have been eager to reclaim the governor’s mansion given Maryland’s deep-blue hue in presidential contests, but with the party facing stiff headwinds, the winner of Tuesday’s Democratic primary will be favored, but not overwhelmingly.

The Democratic primary is wide open and features nine candidates, many of them well known nationally and in the state. They include Peter Franchot, the state’s comptroller; Douglas F. Gansler, a former Maryland attorney general who once successfully prosecuted the Washington, D.C., sniper case; Tom Perez, an Obama administration secretary of labor and former chairman of the Democratic National Committee; John B. King Jr., Mr. Obama’s final secretary of education; and Wes Moore, an Army veteran and former chief executive of the nonprofit Robin Hood Foundation, an anti-poverty group. In the most recent polling, Mr. Franchot, Mr. Moore and Mr. Perez are the leaders, but the race is tight.

The Republicans do not have such star power, but the environment is in their favor. The two leading candidates are Kelly Schulz, who was Mr. Hogan’s secretary of commerce and received his endorsement, and Dan Cox, a first-term member of the Maryland House of Delegates and Christian conservative who has Mr. Trump’s endorsement. Mr. Cox, who called Vice President Mike Pence a traitor during the Jan. 6, 2021, attack on the Capitol, has benefited from $1.16 million in ads run by the Democratic Governors Association on the theory that he would make a weaker opponent than Ms. Schulz in November.

The landscape for the House encapsulates how Democrats faltered where Republicans succeeded in redistricting. An initial map drawn up by the heavily Democratic Legislature aimed for a Democratic sweep of Maryland’s House districts by giving a Democratic lean to Representative Andy Harris’s Republican district on the state’s Eastern Shore. When a state judge objected to that map as an extreme gerrymander, the Legislature came back with a map that kept Maryland’s one Republican district, the First, deep red while turning back into a tossup a Western Maryland district that had been redrawn as Democratic after the 2010 census.

That district, Maryland’s Sixth, features a wealthy Democratic incumbent, David Trone, who has $2 million in the bank to use against the winner of a wide-open Republican primary. Some top Republicans, including Mr. Hogan and Mr. Trump, have latched onto a 25-year-old conservative journalist, Matthew Foldi, as their best shot at beating Mr. Trone. But the leading candidate may be Neil Parrott, a businessman and member of the House of Delegates since 2011 from the small western Maryland city of Hagerstown, who tried and failed to beat Mr. Trone two years ago.

In the largely Black middle-class suburbs north and east of Washington, the primary to succeed Representative Anthony Brown, a candidate for state attorney general, has become a proxy war for competing Israel lobbies. AIPAC’s political action committee, the United Democracy Project, and a new pro-Israel group, the Democratic Majority for Israel, have flooded the airwaves to stop a liberal Democrat, Donna Edwards, from reclaiming the seat she gave up in 2016 to make an unsuccessful run for the Senate. The two groups are backing Glenn Ivey, an Ivy League-educated state’s attorney in Prince George’s County, who narrowly lost the primary to Mr. Brown in 2016.

Angered by AIPAC’s meddling, the liberal pro-Israel group J Street stepped in to back Ms. Edwards with attack ads against Mr. Ivey, framing him as a high-priced Washington lobbyist.

Maryland’s only Republican district was initially the target of a Democratic gerrymander, and when it was considered competitive, it attracted two solid candidates: Dave Harden, a 20-year veteran of the Foreign Service, and Heather Mizeur, a former member of the House of Delegates and House and Senate staff member with broad support from progressive groups. With the district’s Republican tilt restored, however, the Democratic nominee will have a difficult time unseating Representative Andy Harris, though Mr. Harris was mentioned in a recent hearing of the Jan. 6 Committee as having participated in efforts to deny Joseph R. Biden Jr. the presidency.

Pankaj Tripathi: I’m an actor and considered a good one

Fentanyl From the Government? A Vancouver Experiment Aims to Stop Overdoses