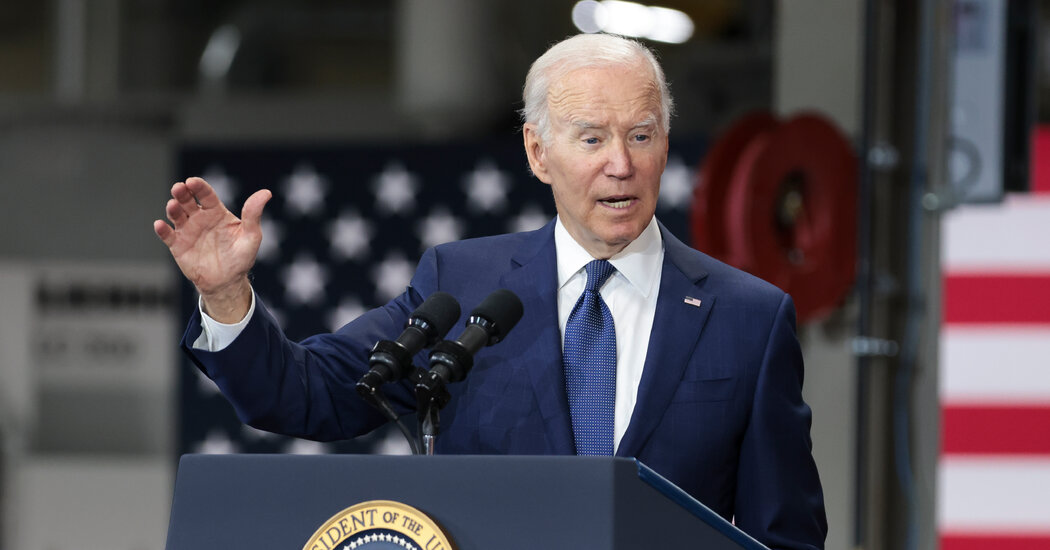 When President Biden delivered a blunt warning at a fund-raiser last Thursday that the war in Ukraine could devolve into a nuclear “Armageddon,” he raised a terrifying prospect that many Americans had not worried much about since the end of the Cold War.

White House officials did not walk back Mr. Biden’s statement; they knew it reflected a deep concern that has sent Pentagon and intelligence officials gaming out different scenarios, from a test detonation over the Black Sea to the use of a nuclear weapon against, say, a Ukrainian military base. But the White House emphasized on Friday that the United States has seen no signs that Russia is gearing up to use nuclear weapons.

But it has been 30 years since most Americans have talked about nuclear deterrence, the difference between tactical and strategic weapons and what havoc a 10 kiloton bomb can trigger versus a 100 kiloton one. So what was the president talking about?

Here is what we know:

As his army loses ground, Putin has been rattling his nuclear saber.

President Vladimir V. Putin of Russia, in an angry speech last month full of bluster and anti-American rhetoric, clearly raised the specter of using nuclear weapons to hold on to his slipping territorial gains in Ukraine.

Mr. Putin said he would use “all available means” to defend Russian territory — which he declared includes four provinces of eastern Ukraine that Russia has attempted to illegally annex. He also argued that the atomic bombs the United States dropped on Japan in 1945 “created a precedent.”

Mr. Biden, last Thursday, said: “For the first time since the Cuban Missile Crisis, we have a direct threat to the use of nuclear weapons, if in fact things continue down the path they are going.”

So far, U.S. officials say they think the chances of Russia using nuclear weapons are low.

Senior American officials say they have seen no evidence that Mr. Putin is moving any of his nuclear assets, especially in Russia’s stockpile of about 2,000 small tactical weapons.

Even though Mr. Putin called for his nuclear forces to go on alert in late February, there has been no evidence that they did. But events like the attack on the Kerch Strait Bridge over the weekend worry officials who fear that a humiliated Putin is more likely to lash out.

Senior U.S. officials are far more concerned than they were at the start of the conflict about the possibility of Mr. Putin deploying tactical nuclear weapons.

After a series of humiliating retreats, astoundingly high casualty rates and a deeply unpopular move to draft young Russian men into service, Mr. Putin clearly sees the threat of his nuclear arsenal as a way to instill fear and perhaps to recover some respect for Russia’s power.

For months, computer simulations from the Pentagon, American nuclear labs and intelligence agencies have been trying to model what might happen and how the United States could respond.

The threshold at which Mr. Putin would resort to nuclear weapons — or how he would use them — is far from clear. The primary utility of a tactical nuclear strike, many U.S. officials say, would be as part of a last-ditch effort by Mr. Putin to halt the Ukrainian counteroffensive by threatening to make parts of the country uninhabitable.

Russia would most likely deploy tactical nuclear arms, which have smaller payloads than intercontinental ballistic missiles.

Analysts say that if Mr. Putin does resort to nuclear weapons, the likeliest scenario would be a relatively small tactical strike, either on the battlefield or as a warning shot in an unpopulated area.

Tactical weapons come in many sizes and varieties, some with a small fraction of the destructive power of the bombs the United States dropped on Hiroshima and Nagasaki in 1945, and some with far larger power. They can be fired from an artillery gun or delivered with a missile.

But they are hard to use and are difficult to control. How much destruction — and lingering radiation — would result depends on factors that include the size of the weapon and the winds. Even a small nuclear explosion could kill thousands and render a base or downtown area uninhabitable for years.

The risks for Mr. Putin could easily outweigh any gains: Depending on the natural winds, the radiation released by Russian weapons could easily blow back into Russian territory.

The West has been vague about how it would respond.

Mr. Biden recently said that the United States would “respond forcefully” if Mr. Putin uses a tactical nuclear weapon. In May he wrote in an essay for The Times that “any use of nuclear weapons in this conflict on any scale” would “entail severe consequences.” His national security adviser, Jake Sullivan, said on Sept. 25 there would be “catastrophic consequences” and those had been communicated to Moscow.

But that does not necessarily mean a retaliatory nuclear strike, which could trigger a broader war. For months, administration officials have said they could think of almost no circumstances in which a nuclear detonation by Russia in Ukraine would result in a nuclear response from the United States.

There have been discussions of several other military responses, such as using conventional weapons against a base or unit from which the attack originated, or giving Ukrainian forces the weaponry to launch that counterattack.

But many of the options under discussion also involve nonmilitary steps, including further cutting Russia off from the world economy and casting Mr. Putin as an international pariah. It would be a chance, some officials say, to bring China and India, along with much of Asia and Africa, into the effort to impose sanctions on Russia, taking away some of the biggest remaining markets for its oil and gas.

Deepika Padukone calls out troll who abuse her on Instagram, says ‘Your family must...