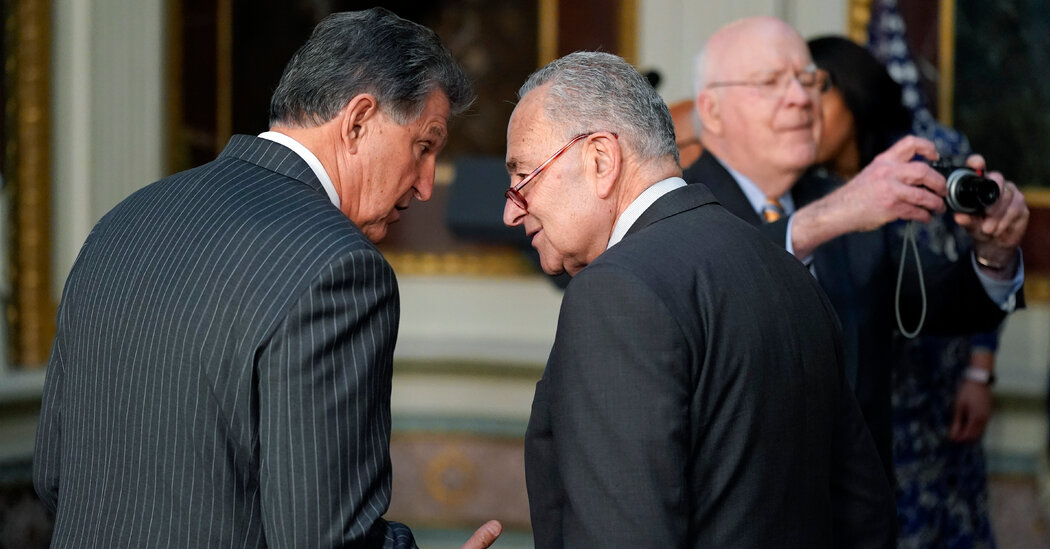 Legislation agreed to by top Democrats falls far short of closing a tax loophole that party leaders have complained about for years but would narrow its preferential treatment.

For years, Democrats and even some Republicans such as former President Donald J. Trump have called for closing the so-called carried interest loophole that allows wealthy hedge fund managers and private equity executives to pay lower tax rates than entry-level employees.

An agreement reached this week between Senator Chuck Schumer, the majority leader, and Senator Joe Manchin III, Democrat of West Virginia, would take a small step in the direction of narrowing that special tax treatment. However, it would not eliminate the loophole entirely and could still allow rich business executives to have smaller tax bills than their secretaries, a criticism lobbed by the investor Warren Buffett, who has long argued against the preferential tax treatment.

The fate of the provision was still not certain given the slim majority that Democrats hold in the Senate. They would need all 50 Democrats to back the legislation because Republicans have been unified in their opposition to any tax increases. But if the legislation did pass, the shrinking of the carried interest exception would bring Democrats a tiny bit closer to realizing their vision of making the tax code more progressive.

What is carried interest?

Carried interest is the percentage of an investment’s gains that a private equity partner or hedge fund manager takes as compensation. At most private equity firms and hedge funds, the share of profits paid to managers is about 20 percent.

Under existing law, that money is taxed at a capital gains rate of 20 percent for top earners. That’s about half the rate of the top individual income tax bracket, which is 37 percent.

‘Build Back Better.’ Before being elected president in 2020, Joseph R. Biden Jr. articulated his ambitious vision for his administration under the slogan “Build Back Better,” promising to invest in clean energy and to ensure that procurement spending went toward American-made products.

A two-part agenda. March and April 2021: President Biden unveiled two plans that together formed the core of his domestic agenda: the American Jobs Plan, focused on infrastructure, and the American Families Plan, which included a variety of social policy initiatives.

A $6 trillion budget. June 2021: President Biden proposed a $6 trillion budget for 2022. The proposal detailed the highest sustained levels of federal spending since World War II, with the goal of funding the investments in education, transportation and climate initiatives articulated in the two plans.

The Infrastructure Investment and Jobs Act. Nov. 15, 2021: President Biden signed a $1 trillion infrastructure bill into law, the result of months of negotiations. The president hailed the package, a pared-back version of what had been outlined in the American Jobs Plan, as evidence that U.S. lawmakers could still work across party lines.

The Build Back Better Act. Nov. 19, 2021: The House narrowly passed a $2.2 trillion social spending bill intended to fund a package of initiatives from the American Families Plan and the American Jobs Plan. But on Dec. 19, 2021, Senator Joe Manchin III, Democrat of West Virginia, said he would not support the bill as written, dooming his party’s drive to pass it.

A new attempt. July 15, 2022: Efforts to revive the bill, in a much smaller form, ahead of the midterm elections were dealt a severe blow when Mr. Manchin told Senator Chuck Schumer, the majority leader, that he was unwilling to support funding for climate or energy programs or raising taxes on wealthy Americans and corporations.

A surprise deal. July 28, 2022: In a reversal, Mr. Manchin said that he had agreed to a deal to include hundreds of billions of dollars for climate and energy programs and tax increases in a package to subsidize health care and lower the cost of prescription drugs. The package’s climate proposals would be the most ambitious climate action ever taken by Congress.

The 2017 tax law passed by Republicans largely left the treatment of carried interest intact, following an intense business lobbying campaign, but did narrow the exemption by requiring private equity officials to hold their investments for at least three years before reaping preferential tax treatment on their carried interest income.

What would the Manchin-Schumer agreement do?

The agreement between Mr. Manchin and Mr. Schumer would further narrow the exemption, in several ways. It would extend that holding period to five years from three, while changing the way the period is calculated in hopes of reducing taxpayers’ ability to game the system and pay the lower 20 percent tax rate.

Senate Democrats say the changes would raise an estimated $14 billion over a decade, by forcing more income to be taxed at higher individual income tax rates — and less at the preferential rate.

The longer holding period would only apply to those who make $400,000 per year or more, in keeping with President Biden’s pledge not to raise taxes on those earning less than that amount.

The tax provision echoes a similar measure that was initially included in the sprawling climate and tax bill that House Democrats passed last year but that ultimately stalled in the Senate. The carried interest language was removed amid concern that Senator Kyrsten Sinema, Democrat of Arizona, who opposed the measure, would block the overall legislation. Ms. Sinema has so far not indicated whether she would agree to any of the new package’s tax provisions. Democrats were essentially betting that she would not block the larger bill over a relatively small change that raises revenue.

Why hasn’t the loophole been closed by now?

Many Democrats have tried for years to completely eliminate the tax benefits private equity partners enjoy. Democrats have sought to redefine the management fees they get from partnerships as “gross income,” just like any other kind of income, and to treat capital gains from partners’ investments as ordinary income.

Such a move was included in legislation proposed by House Democrats in 2015. The legislation would also have increased the penalties on investors who did not properly apply the proposed changes to their own tax filings.

The private equity industry has fought back hard, rejecting outright the basic concepts on which the proposed changes were based.

“No such loophole exists,” Steven B. Klinsky, the founder and chief executive of the private equity firm New Mountain Capital, wrote in an opinion article published in The New York Times in 2016. Mr. Klinsky said that when other taxes, including those levied by New York City and the state government, were accounted for, his effective tax rate was between 40 and 50 percent.

What would the change mean for private equity?

The private equity industry has defended the tax treatment of carried interest, arguing that it creates incentives for entrepreneurship, healthy risk-taking and investment.

The American Investment Council, a lobbying group for the private equity industry, described the proposal as a blow to small business.

“Over 74 percent of private equity investment went to small businesses last year.,” said Drew Maloney, chief executive of the A.I.C. “As small business owners face rising costs and our economy faces serious headwinds, Washington should not move forward with a new tax on the private capital that is helping local employers survive and grow.”

The Managed Funds Association said that the changes to the tax code would hurt those who invest on behalf of pension funds and university endowments.

“Current law recognizes the importance of long-term investment, but this proposal would punish entrepreneurs in investment partnerships by not affording them the benefit of long-term capital gains treatment,” said Bryan Corbett, the chief executive of the association.

“It is crucial Congress avoids proposals that harm the ability of pensions, foundations, and endowments to benefit from high value, long-term investments that create opportunity for millions of Americans.”

As Biden Reaches Out to Mideast Dictators, His Eyes Are on China and Russia

Biggest asteroid to pass by Earth this year comes closest