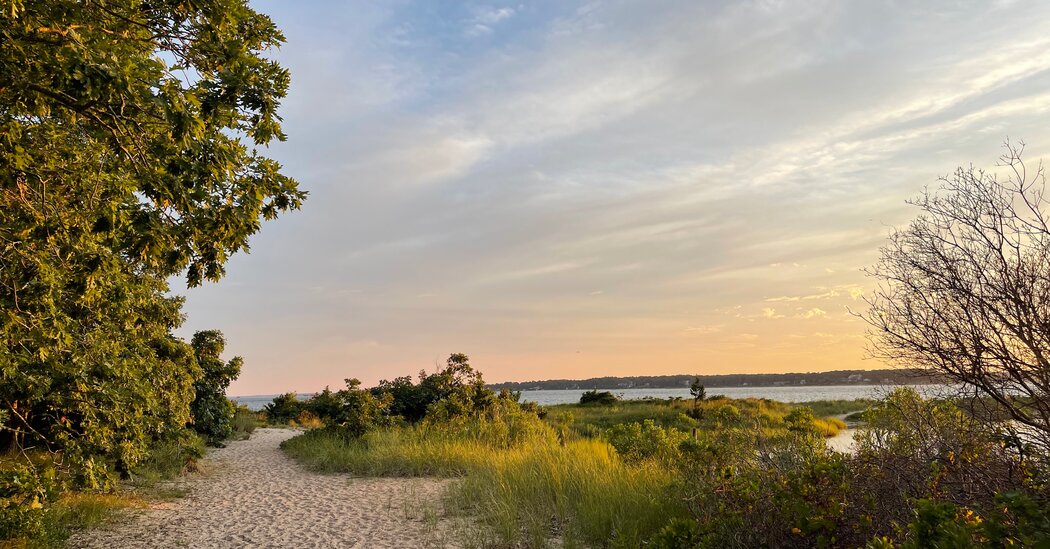 The once sleepy isle gets updated hotels, a bagelry and a pop-up Marni shop.

SITUATED BETWEEN LONG Island’s North and South Forks, Shelter Island is a particularly distinct kind of island getaway. About three hours from Manhattan and reachable via a short car ferry from either Greenport or North Haven, the 8,000-acre isle is bordered by the Peconic River to the west and Gardiners Bay to the east. As beach escapes go, it’s less fussy than the Hamptons and more laid back than the North Fork. The narrow shoreline is strewn with rocks and shells, while the interior is all woodsy marshlands, with brackish and freshwater ponds. Life here proceeds at a hypnotically slow place; cyclists braking for a family of wild turkeys could pass for a traffic jam.

The traditional home of the Manhanset people, Shelter Island was appropriated by King James I of England and was part of his original grant to the Plymouth Colony in 1620. Once colonized, the land passed through several more hands, acquiring the name Shelter Island around 1652. By the early 1900s, several millionaires had built houses there; more summer homes and cottages cropped up after World War II. In the 2020 census, the island reported roughly 1,600 full-time residents, though that number swells in the summer, as demonstrated by the weekenders crowding André Balazs’s chic Sunset Beach hotel and two historic island inns that have recently been modernized.

While fishing and farming were the dominant industries years ago, today’s residents are more likely to be hotel workers, interior designers or restaurateurs. An increasing number of artists are opening studios as well, says the abstract artist Margaret Garrett, 57, who has kept a studio and residency on Shelter Island for 25 years and curated the summer exhibition “Once on This Island” at the Shelter Island Historical Society. The show features the work of Willem de Kooning, Jules Feiffer, Janet Culbertson and other creatives who have sought inspiration here over the years.

Despite a flood of pandemic newcomers, the coastal calm of the island remains largely unspoiled; just head to the secluded beach at Crab Creek or the miles of vivid green trail in Mashomack Preserve to see for yourself. (A new mobile payment system makes it easier than ever for nonresidents to find parking, which was once a pain point for day-trippers.) “Working in a studio surrounded by nature affects me on a cellular level, which in turn affects my work,” says Garrett. “The combination of solitude and community is ideal for an artist.”

Right in time for its 95th birthday, this Crescent Beach hotel has undergone a down-to-the-studs face-lift, bringing the storied property into the 21st century. Owners and Shelter Island residents since 1961, the Petry family partnered with Cape Resorts (which also runs Baron’s Cove in Sag Harbor and several hotels in Cape May, New Jersey) for the renovation and management of the hotel. Cape Resorts’ Colleen Bashaw led the redesign, focusing on preserving original details like circa-1927 chandeliers and some of the wicker and rattan furniture while adding bursts of color and pattern via wallpapers from Zina Studios and textiles from Shumacher. The result: 33 Adirondack-inspired rooms with custom-designed oak cannonball beds and scallop-edged side tables in the main house and 16 stand-alone one- and two-room cottages accented with vintage Shelter Island maps, flat-weave sisal rugs and custom green floral throw pillows covered in Schumacher’s Exotic Butterfly print. There’s also a game room with a Ping-Pong table and vintage Pac Man console and a new fitness center and spa complete with three treatment rooms and wet and dry saunas. caperesorts.com/pridwin.

Another longstanding property with a fresh look, the many-gabled Chequit dates to 1872 but was bought by the Soloviev Group in 2020 and renovated by New York’s Glen & Co. Architecture + Design. The main building now has 19 rooms in a minimalist gray, beige and white palette, with all-new bathrooms, some featuring claw-foot tubs. (Two separate buildings house an additional 16 guest rooms that have yet to be renovated.) Shiplap walls, decorative oar signs and narrow low-ceilinged hallways channel a nautical vibe. A small pool is being installed out back, in time for next summer, but the biggest draw for now are the pair of new restaurants run by beloved Greenport chef Noah Schwartz: Weakfish Sushi & Noodle and the Tavern, with its raw bar and billiards table. Both spots feature outdoor seating on the hotel’s wraparound porch and newly added patio. thechequithotel.com.

Valerie Mnuchin has teamed up with her father, Robert Mnuchin, the former co-owner of the Mayflower Inn & Spa in Washington, Connecticut, to open a restaurant named after her paternal grandfather, Léon, a Belgian émigré who spent half of his life on the East End. It’s housed in a newly erected farmhouse-style building with exposed wooden trusses, canvas-upholstered banquettes and an open hearth with a blackened steel hood and a soapstone top. The live fire turns out French- and Italian-inspired dishes such as striped bass with spicy peperonata and grilled rib-eye served with herbed crispy potatoes; handmade pastas, locally sourced salads and seafood crudos are also on the menu. leon1909.com.

Shelter Island survived centuries without a bagel shop, but when this takeout spot with brightly hued picnic tables and ’80s-era-MTV-inspired décor (think black-and-white triangle-patterned floors and a mustard-yellow ceiling and wall textured with zigzagging lightning bolts) opened in April, it was instantly mobbed. The brainchild of native New Yorker Darryn Weinstein and his wife, Amy, the cafe sells egg, za’atar and jalapeño-cheddar bagels topped with everything from Sriracha cream cheese and lox to scrambled eggs, bacon, tomato and avocado. eccentricbagel.com.

Elizabeth Peeples and Stefanie Bassett, co-owners of Little Ram Oyster Co., farm their bivalves north of Little Ram Island, a peninsula on the eastern side of Shelter Island. In April, they introduced a new processing facility at the Shoals “boatel” in Southold, across the Peconic. Guests can sample Little Ram oysters from the Shoals’ on-site food truck or sign up for a tour of the company’s floating oyster nurseries, which includes shucking instruction and a tasting. They will see the massive aluminum oyster-tumbling machine in action and learn how various environmental factors impact an oyster’s flavor. (Little Rams, for the record, are known for their brisk minerality and medium salinity.) littleramoysters.com.

Lavender, hydrangeas and pink gerbera encircle a handful of metal chairs and tables in the storybook backyard of this garden center and landscape-design firm, which began hosting visitors in its wine garden last year. Every weekend through the end of summer, guests can order cheese-and-charcuterie boards from the King Andrew Cheese cart parked on-site, grab a glass of the house rosé (White Oak partnered with the North Fork’s Lenz Winery to make its own) and play bocce while listening to live music from local bands including the Bodega Tallboys and Rob Europe. whiteoakfarmandgardens.com.

Half a dozen interior designers have debuted studios and shops on Shelter Island in recent years. At Ram Design Home, founder Cristina Peffer showcases ceramics by Lily Hoffman, photography from the Robin Rice Gallery and minimalist furniture from Alfredo Paredes, the former chief creative officer of Ralph Lauren. And now, for the second summer in a row, the Sunset Beach hotel is hosting a pop-up by the Italian fashion label Marni, filled with boldly patterned clothing, wide-strapped platform leather sandals and chunky jewelry, along with the Marni Market collection of colorful handbags and baskets handwoven by Colombian artisans. ramdesignhome.com; marni.com.

“The handmade nature of these pedestal bowls, available in the Havens Store at the Shelter Island Historical Society, adds some nice texture to a kitchen,” says Sarah Zames, the founder of the interior architecture and design firm General Assembly and a regular on Shelter Island. “Having it a bit higher also differentiates it from a typical fruit bowl.” From $60; shelterislandhistorical.org/havensstore.html.

Lilielle Pillow, Made of Wool, Linen and Hemp, From Heiberg Cummings’s the Atelier

“These are just the right materials for cuddling up, and the colors are very organic,” says Marie Eiffel, a French transplant and owner of Shelter Island retail stalwarts Marie Eiffel Market and Marie Eiffel Fashion, both on North Ferry Road. “You can throw them on the floor, pile them up and lay down on them or put them on a chair, sofa or bed — they just look good with everything.” $425; hcd3.com.

TRS agitations to continue after April 11

‘Congress allying with outfits that wish to divide nation’: Amit Shah at rally in...