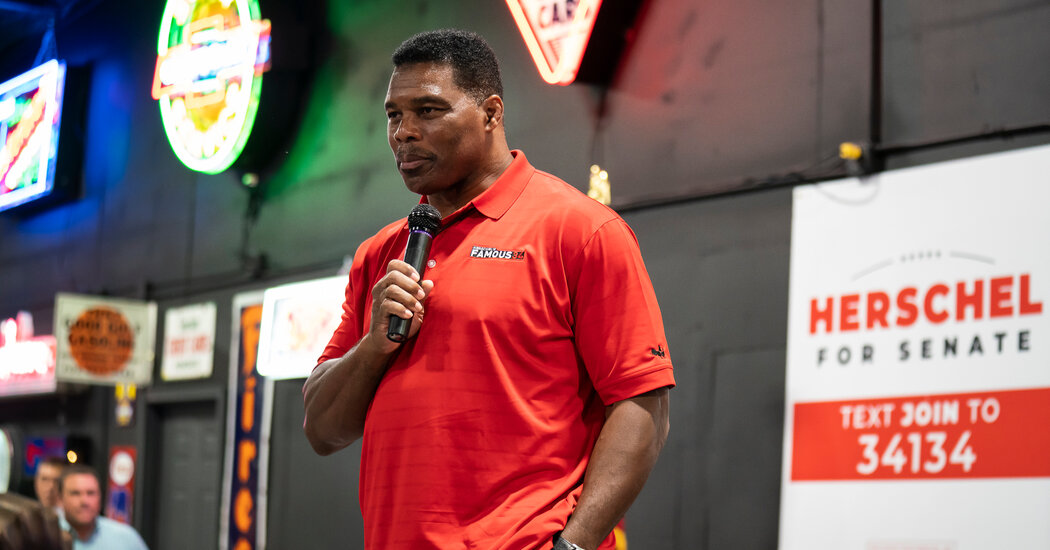 As we enter the second half of this year’s midterm primary season, more than 30 states have already held nominating contests — including some of the most crucial ones, like in Pennsylvania and Georgia.

But a lot of contests are still ahead, including several taking place Tuesday in Arizona, Michigan and Washington that former President Donald J. Trump has weighed in on.

Across the country, Mr. Trump has endorsed more than 200 candidates, many of whom ran unopposed or faced little-known, poorly funded opponents.

For some — like J.D. Vance in Ohio and Dr. Mehmet Oz in Pennsylvania — Mr. Trump’s endorsement was crucial to securing victory. But in Georgia, several of his candidates were resoundingly defeated, and he had mixed success in South Carolina and North Carolina.

Here is a look at Mr. Trump’s endorsement record in key primary races.

In Georgia, several losses and one victory

Gov. Brian Kemp easily defeated former Senator David Perdue, Mr. Trump’s handpicked candidate, in the Republican primary for governor. Mr. Kemp became a Trump target after he refused to overturn the president’s loss there in 2020. He will face the Democratic nominee, Stacey Abrams, whom he narrowly defeated four years ago.

In a primary runoff for an open seat in Georgia’s Sixth Congressional District, Rich McCormick, a physician and retired Marine, defeated the Trump-backed Jake Evans, the former chairman of Georgia’s ethics commission and the son of a Trump administration ambassador.

The former professional football star Herschel Walker, who was endorsed by Mr. Trump, dominated a Senate primary and will face Senator Raphael Warnock, a Democrat and prolific fund-raiser, in the general election.

Doug Mastriano, a state senator and retired Army colonel who has promoted false claims about the 2020 election and attended the protest leading up to the Capitol riot, won the Republican nomination for governor. Mr. Trump had endorsed him just a few days before the May 17 primary.

Two wins and a loss in North Carolina

Representative Ted Budd won the Republican nomination for Senate, and Bo Hines, a 26-year-old political novice who enthralled Mr. Trump, was catapulted to victory in his primary for a House seat outside Raleigh.

But Representative Madison Cawthorn crumbled under the weight of repeated scandals and blunders. He was ousted in his May 17 primary, a stinging rejection of a Trump-endorsed candidate. Voters chose Chuck Edwards, a state senator.

Representative Tom Rice, one of 10 House Republicans who voted to impeach Mr. Trump after the Jan. 6, 2021, attack on the Capitol, was ousted by his Trump-backed challenger, State Representative Russell Fry, in the Seventh Congressional District.

But Representative Nancy Mace defeated her Trump-backed challenger, the former state lawmaker Katie Arrington, in the First Congressional District. Ms. Mace had said that Mr. Trump bore responsibility for the Jan. 6 attack, but did not vote to impeach him. She had support from Nikki Haley and Mick Mulvaney, who both held office in the state before working in the Trump administration.

Adam Laxalt won a Senate primary and will face the incumbent, Senator Catherine Cortez Masto, who is seen as one of the most vulnerable Democrats this fall. Mr. Laxalt, a former attorney general, was endorsed by Mr. Trump and had helped lead his efforts to overturn the 2020 presidential election results in Nevada.

Jim Marchant did not garner a formal endorsement, but his win in the secretary of state primary may well be considered a victory for Mr. Trump: He is a Trump loyalist who helped organize a slate of “America First” candidates for election posts who question the legitimacy of the 2020 election. He will face Cisco Aguilar, a Democratic lawyer.

Victories in Illinois, with outside help

State Senator Darren Bailey, who got a last-minute endorsement from Mr. Trump, won the Republican primary for governor. Democratic spending, including by Gov. J.B. Pritzker, may have helped Mr. Bailey, whom Democrats saw as easier to beat in the general election than the other Republicans.

The Senate candidate J.D. Vance defeated a field of well-funded candidates, nearly all of whom pitched themselves as Trump-like Republicans. Mr. Vance, an author and venture capitalist, had transformed himself from a self-described “never Trump guy” in 2016 to an “America First” candidate in 2022.

Max Miller, a former Trump aide who denied assault allegations from an ex-girlfriend and was later endorsed by Mr. Trump, won his House primary after two other Republican incumbents opted not to run.

Mr. Trump also endorsed Madison Gesiotto Gilbert, a lawyer and former beauty queen who had been a surrogate for his presidential campaign. She won a seven-way primary for a congressional seat being vacated by Representative Tim Ryan, a Democrat running for Senate.

In Maryland, a win aided by Democrats

Dan Cox, a first-term state legislator who embraced Mr. Trump’s lies about the 2020 election, handily defeated Kelly Schulz in the Republican primary for governor. Ms. Schulz was seen as a protégé of Gov. Larry Hogan, a leader of the party’s anti-Trump wing.

Mr. Cox, whom Mr. Trump endorsed in November 2021, raised little money. But he benefited from more than $1.16 million in television advertising from the Democratic Governors Association, which helped his primary campaign in hopes that he would be easier to defeat in the general election.

A victory in West Virginia

Representative Alex Mooney prevailed over Representative David McKinley in a newly drawn congressional district. Mr. Trump’s endorsement was seen as the decisive factor in the race.

A win in California

Kevin Kiley, a state lawmaker endorsed by Mr. Trump, advanced to the general election after finishing second in an open primary in the Third Congressional District. He will face Kermit Jones, a Democrat who is a doctor and Navy veteran and was the top vote-getter.

A narrow win in Montana

Ryan Zinke had been Montana’s at-large congressman before serving in the Trump administration. Now he is looking to return to Congress in the newly created First Congressional District. Mr. Trump endorsed him, and he narrowly won his primary.

A loss in Nebraska

Charles W. Herbster, a wealthy agribusiness executive, lost his three-way primary to Jim Pillen, a University of Nebraska regent supported by Gov. Pete Ricketts, who has long clashed with Mr. Trump and is term-limited. Late in the campaign, Mr. Herbster was accused of groping several women. He denied the accusations.

And another loss in Idaho

Gov. Brad Little overcame Mr. Trump’s endorsement of the state’s lieutenant governor, Janice McGeachin, who was challenging him in the Republican primary.