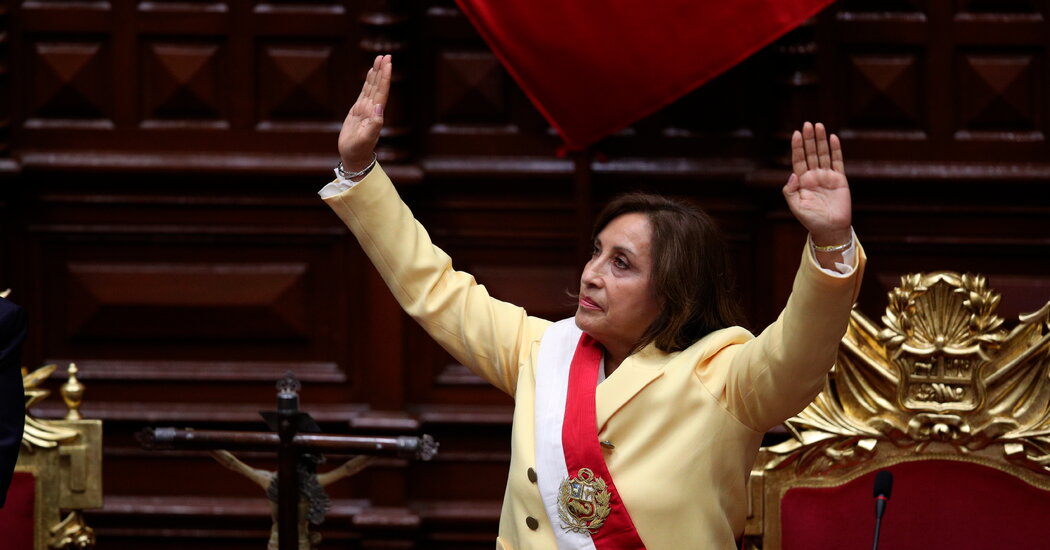 Ms. Boluarte, the country’s first woman president, ascended to power suddenly, after her predecessor was arrested. She takes power as corruption and discontent test democracies across Latin America.

Like the man she replaced, she is a leftist who grew up far from the capital, with a strong connection to her mostly poor mountainous region.

Unlike her predecessor, however, Dina Boluarte, 60, the new president of Peru and the first woman to lead the country, does not have a reputation as a firebrand.

On Wednesday, Ms. Boluarte replaced Pedro Castillo as president, after Mr. Castillo, 53, tried to dissolve Congress and install an emergency government — a move widely condemned as an attempted coup.

“It is up to us to talk, to engage in dialogue, to reach agreements,” said Ms. Boluarte, formerly the vice president, in her first speech as president, in which she called for a government of unity. “I ask for time to rescue our country from corruption and incompetence.”

The stunning but peaceful transition quickly came to symbolize two seemingly opposing characteristics that have come to define Peru’s young democracy: its fragility, but also its resiliency.

In the last five years, the country has cycled through six presidents and two congresses, while corruption scandals, impeachment proceedings and deep division have undermined the government’s ability simply to function.

Yet, when Mr. Castillo, a former teacher and union activist, declared he was creating a new government that would rule by decree, he seemed to go too far.

In a period of just hours, his ministers resigned en masse, the country’s armed forces and national police declined to back him, he was quickly arrested and Ms. Boluarte was sworn in.

The political drama reflected a larger trend across Latin America, analysts said. Corruption, widespread frustration over growing inequality and longstanding anger at the elite have fueled distrust and populism across the region.

What to Know About the Ousting of Peru’s President

Who is Pedro Castillo? The left-wing Peruvian president was elected in 2021 after campaigning on a promise to address the country’s chronic inequality. But in less than a year and a half in office, Mr. Castillo has been plagued by corruption scandals. Peru’s Congress voted to oust him after critics accused him of attempting a coup.

What led to his removal? Prosecutors accused Mr. Castillo of leading a criminal organization to profit from government contracts and of obstructing justice. Hours before Congress was scheduled to vote on impeachment, Mr. Castillo announced the dissolution of Congress and the installation of an emergency government to rule by decree.

What happened next? Mr. Castillo’s announcement prompted the mass resignation of much of his government and a statement from Peru’s armed forces and the police suggesting that he did not have the legal authority to carry out his decree. In a swift vote hours after his announcement, Congress voted to impeach him and remove him from office.

What does this mean for Peru? Vice President Dina Boluarte will now lead the country’s fragile democracy through its biggest political crisis in years. The crisis comes as Peru’s inflation rate is at its highest point in decades, raising the stakes of political dysfunction in a nation where a quarter of the population of 33 million lives in poverty.

These factors have led to repeated tests of often young democracies, breeding extremist candidates and leaders who sow distrust in election results, in some cases adopting the playbook of former President Donald J. Trump.

But, while some countries, including Venezuela and Nicaragua, have slid into autocracy, democracy has proved resilient recently in countries like Brazil and Colombia, both of which held elections this year that challenged the strength of their institutions.

“They’re not thriving,” Steve Levitsky, a government professor at Harvard University, said, speaking of Latin American democracies, “but they are surviving, and that is not a small thing.”

Mr. Castillo was being held at naval base on the outskirts of Lima, the capital, where he faces charges of “rebellion,” according to the prosecutor’s office. On Thursday, he appeared at an initial court hearing, in which a judge approved a request to keep the former president imprisoned for at least a week as the case against him is prepared.

Ms. Boluarte is from the south-central department of Apurímac, a majority Indigenous Quechua-speaking region. A lawyer and civil servant, she worked for 15 years in the country’s national registry, the ministry that issues identification cards and manages records of births, marriages, divorces and deaths.

The national registry is politically autonomous from the rest of the government, and several Peruvian political analysts said it is generally seen as an efficient and technocratic institution.

Ms. Boluarte belonged to a Marxist political party, but broke with the party after a disagreement with its leader, telling the magazine Caretas: “Like thousands of Peruvian men and women, I am from the left, but from the democratic left, not a totalitarian or sectarian one.” She praised a kind of politics “that allows divergence and criticism” rather than one “where there are no infallible or untouchable leaders.”

In 2021, Ms. Boluarte ran on Mr. Castillo’s ticket, and then served as both his vice president and his minister of development and social inclusion. When she was sworn in last year, she announced that she was taking office to serve “the nobodies.”

But she resigned from the ministry after the president formed his last cabinet last month, while staying on as vice president.

On Wednesday, she quickly criticized the former president’s call to shutter Congress, saying on Twitter: “I reject Pedro Castillo’s decision to perpetrate the breakdown of the constitutional order with the closure of Congress. It is a coup.”

In an interview, the U.S. ambassador to Peru, Lisa Kenna, commended the institutional response to Mr. Castillo’s attempt to dissolve Congress, calling it a “win for democracy in Peru.”

Ms. Kenna said that she and Ms. Boluarte had held “substantive meetings” in the past. The ambassador added that she had requested another meeting with Ms. Boluarte, though they had not spoken since the swearing in.

Like Mr. Castillo, Ms. Boluarte had never been elected to a political office before 2021. She ran for mayor of a part of Lima, the capital, in 2018, and for Congress in a primary in 2020, and lost both races. But she has spent years working in government.

“After a year in government, a year and a half, she is not a stranger,” he said. “On the contrary, I think she’s a person who will know how to move in the quicksand of Peruvian power.”

She will face an uphill battle in Congress, now that she is in open conflict with the party that she and Mr. Castillo ran with.

Carlos Reyna, who worked with Ms. Boluarte for nine years at the national registry, described her as sociable with a polite formality. He doesn’t remember her ever drawing attention to herself, and was surprised to see her enter politics.

He was optimistic about her ability to handle the presidency, and heartened by her calls for truce and understanding in her first speech.

“This is something that people very much need right now in Peru,” said Mr. Reyna, who is now a social sciences professor at San Marcos University in Lima. “I think she has what it takes to be able to do it well.”

On Thursday, the streets of Lima and other cities were mostly calm, following a day when some of Mr. Castillo’s supporters had taken to the streets in scattered protests.

In a half dozen interviews, most people said they supported the institutional rejection of Mr. Castillo’s attempt to shutter the government.

But few believed that Ms. Boluarte would be able to usher in a new era of confidence in Peruvian democracy.

Patricia Díaz, 46, who works at the front desk of an apartment building in Lima, called the peaceful transition of power “a relief” but said she had little hope for Ms. Boluarte.

Anyone who enters the government “with good intentions,” Ms. Díaz said, “is corrupted.”

Jacelin Tuesta, 39, a saleswoman for a cigarette distributor, said that she saw Ms. Boluarte as no different than politicians of the past.

“But she is new and we’re going to have faith,” Ms. Tuesta said. “She’s a woman, so maybe she’ll have another viewpoint.”

In an interview, Noam Lupu, associate director of the Latin American Public Opinion Project at Vanderbilt University, said the transition of power in Peru was a positive development, but he cautioned against too much celebration. He pointed out his research showing that Peruvians are highly dissatisfied with democracy, believe that a majority of politicians are corrupt and have a high tolerance for coups.

He asked, is Peruvian democracy enduring “because there’s some underlying sort of structural, institutional features that are going to ensure survival?”

Or, he said, “is it surviving because no one has come along who is really capable of galvanizing discontent?”