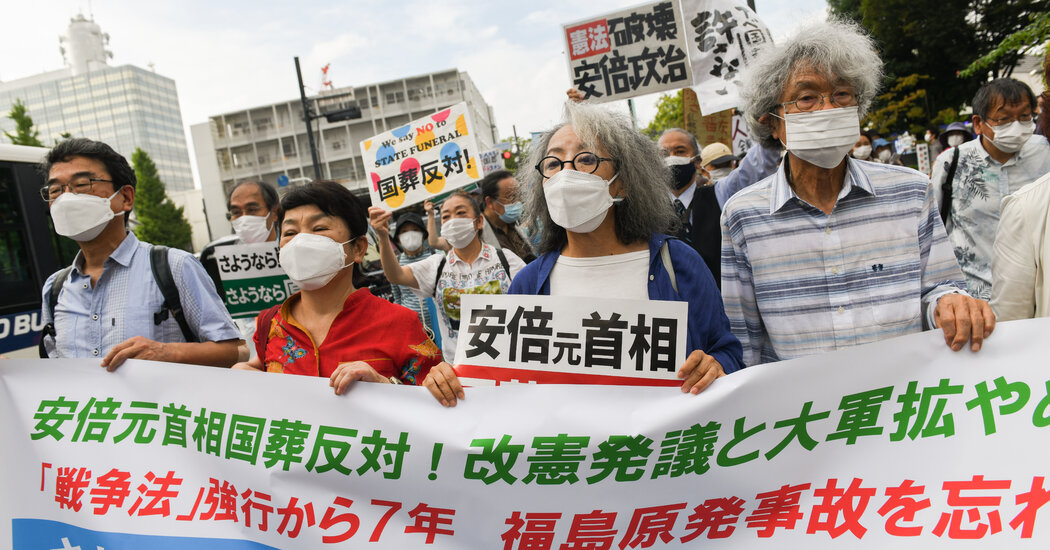 The fallout from Shinzo Abe’s death has taken a number of unexpected turns, casting a critical light on both his long-governing party and a fringe religious group.

TOKYO — Nearly three months after Shinzo Abe, Japan’s most influential and longest-serving prime minister, was gunned down in broad daylight at a campaign stop, his death is still reverberating, though in ways few would have predicted.

An outpouring of anger prompted by the assassination has been directed not at the killer, his ability to make and deploy a firearm in a country where guns are tightly restricted, or the security detail that failed to protect Mr. Abe. Instead, the public has turned its ire toward the slain leader’s long-governing Liberal Democratic Party and its plan to hold a state funeral for him next week.

Fumio Kishida, the current prime minister, is suffering his worst approval ratings since he became the party’s leader last fall. Any sense of public mourning seems to have faded as thousands of protesters have taken to the streets or signed petitions opposing the state funeral, complaining that the ceremony is a waste of public money and was unilaterally imposed upon the country by Mr. Kishida and his cabinet.

Mr. Abe’s assassination has also set off a wave of uncomfortable revelations about ties between governing party politicians and a fringe religious group. Tetsuya Yamagami, the man charged with Mr. Abe’s murder, had written before the shooting of his anger at the Unification Church — a South Korea-based group with significant operations and legal entanglements in Japan — and its involvement in the nation’s politics.

And in perhaps the biggest twist, Mr. Yamagami, far from being reviled, has struck a deep chord among the Japanese public with his story. For weeks, Japan’s often quiescent news media has dug into the church’s business in Japan and the connections between politicians and a group accused of preying on vulnerable people, including Mr. Yamagami’s mother, for its financial gain.

With hundreds of international dignitaries set to land in Tokyo for the state funeral on Tuesday — the first for a Japanese prime minister in 55 years — the backlash has also become a referendum on Mr. Abe’s nearly eight consecutive years in power. While Mr. Abe was largely lionized on the global stage, he was much more divisive in his home country, and those who opposed his right-leaning policies are now airing myriad grievances about his reign.

Azumi Tamura, an associate professor of sociology at Shiga University, said that those critical of the state funeral believed it would wrongly elevated a politician who was involved in a number of controversial decisions and scandals, including accusations that his government had improperly granted favors to political friends and mishandled the early days of the coronavirus pandemic.

“Now people think ‘why didn’t more people get mad at the time?’” she said. “These are the issues that should have dragged his government down, and they didn’t.”

While voters may continue to keep Mr. Abe’s party in power in the name of stability, they are voicing their critique of his actions in life by opposing the effort to honor him in death.

At a protest on Monday against the funeral, thousands of people gathered in Yoyogi Park in central Tokyo and raised multicolored flags representing a cornucopia of causes: women’s empowerment, disability rights, L.G.B.T.Q. allegiance and opposition to nuclear power or American military bases.

“I think that it’s important for all of us to get together like this and express our feelings,” said Shuhei Sato, 42, who stood out in the rain. “What Abe did, what he stood for, everybody he hurt — it is not OK.”

Internationally, Mr. Abe earned praise for his early success in jump-starting Japan’s moribund economy, his hosting of President Barack Obama in the first American presidential visit to Hiroshima and his adroit handling of a mercurial President Donald J. Trump. He also helped hold together a sweeping multinational trade agreement intended as a bulwark against China even after Mr. Trump withdrew the United States from it.

At home, his reputation was cloudier. He was criticized for strong-arming the news media and overriding huge public and opposition party protests as he pushed through legislation that reinterpreted Japan’s pacifist Constitution and authorized overseas combat missions alongside allied troops. Women expressed disappointment at his failure to deliver on his promises to overhaul centuries of patriarchal dominance.

“What is most regrettable is that a politician’s funeral is still being held while over half of Japanese voters are against holding this state funeral,” Katsuya Okada, the secretary general of the Constitutional Democratic Party, the largest opposition party, said at a news briefing this past week. Some media polls show that more than 60 percent of the public opposes the funeral.

Even more damaging have been the continuing disclosures about extensive connections between the Unification Church — which Mr. Yamagami said had bilked his mother of nearly $1 million — and the Liberal Democratic Party.

So far, the party has announced that almost half of the 379 Liberal Democratic members of Parliament have acknowledged ties with the Unification Church, ranging from sending congratulatory telegrams to organizations affiliated with the church to appearing at church conferences.

“The assassination is directly responsible for shining a light on the dark area of cooperation between the Unification Church and the L.D.P.,” said Jeffrey J. Hall, a professor at Kanda University of International Studies who researches Japanese politics.

As the Unification Church’s actions have been exposed, Mr. Yamagami has become a kind of romantic antihero for some people who have felt buffeted by economic and social forces beyond their control, said Tamaki Kawasaki, a journalist who has closely tracked the public’s response to Mr. Abe’s death.

Over the past several decades, stagnant growth and widening inequality — caused in part by Mr. Abe’s economic policies — have created a generation that has “a strong sense that they’re victims,” Ms. Kawasaki said.

Online, a group of women whom Ms. Kawasaki has dubbed “Yamagami Girls” have rhapsodized about Mr. Yamagami’s looks and the bookish intelligence they say he demonstrated on his Twitter account. Well-wishers have deluged his jailers with care packages, according to Mr. Yamagami’s uncle, who has grudgingly received them at his home.

Even a sympathetic biopic of Mr. Yamagami is headed to theaters. Masao Adachi, a film director and former radical leftist, said he planned to screen the movie in a limited number of art house cinemas on the day of Mr. Abe’s funeral before releasing a full version nationwide early next year.

The spotlight on the Unification Church has also fallen on the governing party’s longstanding collaboration with another group of religious-backed politicians.

“Certainly a violent incident is when everything is laid bare,” said Levi McLaughlin, an associate professor of philosophy and religious studies at North Carolina State University who specializes in Japan. “Soka Gakkai has been the subject of this kind of criticism for many decades.”

Daisaku Hiraki, a Komeito member of the Upper House of Parliament, said a major difference in the case of the Unification Church was that the connections were out of public view.

“Right now the public is casting a critical eye on the L.D.P. and the Unification Church because people are saying we didn’t know about the relationship between the two organizations,” Mr. Hiraki said in an interview in his office. With Soka Gakkai and Komeito, he said, “the relationship is very transparent.”

But even as the public has found its voice in opposing the state funeral, a political transformation is unlikely, said Shigeru Ishiba, a prominent Liberal Democratic member of Parliament who nearly defeated Mr. Abe in a contest for the party leadership in 2012.

“Mr. Kishida’s support rate is dropping, but support for the opposition parties hasn’t gone up,” he said. “The public is upset. They’re uncertain. I guess they’re just at a loss for what to do.”

Protest organizers said they held out hope that the public would be galvanized.

Nahoko Hishiyama, 33, an organizer of the large protest in Yoyogi Park and secretary general of a grass-roots organization that opposes a proposal by Mr. Abe to revise the pacifist Constitution, said activists could target city and prefectural elections to put pressure on the national government.

“The Japanese,” she said, “need to think of themselves as people who, if they raise their voices, can change things.”