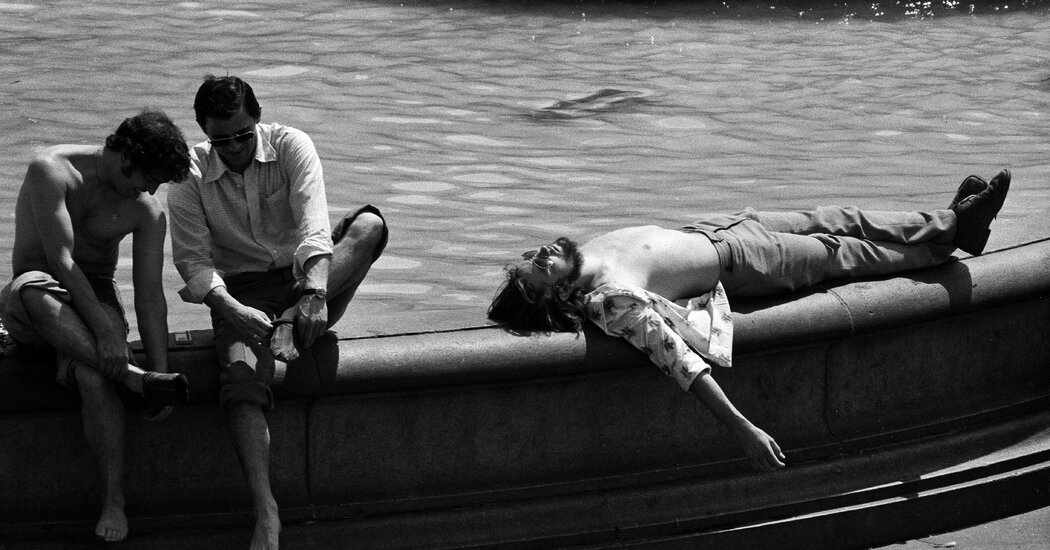 LONDON — The sun beat down, the reservoirs dried up and, as a minister was appointed to deal with the drought, Britons were urged to restrict their ablutions to just five inches of bath water.

It was 1976 and in those simpler times, people didn’t all complain. In fact, some wore T-shirts with a slogan that quite a few believed — albeit incorrectly — was official government advice: “Save water, share a bath with a friend.”

That is how some in Britain like to recall that one sweaty summer in the mid-1970s, contrasting the stoical response to the hot spell decades ago with more alarmist reactions to this week’s high temperatures.

“This heat wave hysteria epitomizes the Tories’ fatal embrace of nanny statism,” read the headline of a recent opinion article in The Daily Telegraph that included a comparison to the summer of 1976.

Others, while not specifically referencing the 1976 heat, have suggested that modern Britain has gone soft in the face of this heat wave. A Conservative lawmaker, John Hayes, who caused a stir by complaining about “snowflake” Britons, stuck by his remarks in comments to his local paper, The Lincolnshire Free Press. “We can’t create a society where people don’t take responsibility for themselves or for their neighbors,” he said.

And even the outgoing prime minister, Boris Johnson, told a cabinet meeting on Tuesday that, as the heat wave arrived, it was important to “balance risk with the need to keep our country, our society and our economy moving,” Downing Street said.

Yet the comparison to 1976 is misleading. The highest recorded temperature then was 35.9 degrees Celsius, whereas on Tuesday it surpassed 40 degrees.

According to the Met Office, none of the country’s top 10 hottest days occurred in 1976.

And other data show the contrast in conditions between 1976 and 2022, one that scientists say is a reflection of relentless climate change.

For good or ill, the climatic conditions of certain years tend to enter popular British mythology in a way that can keep them alive in the public memory. For example, Mr. Johnson often jokingly referred to his former Brexit negotiator, David Frost, as “the greatest Frost since the Great Frost of 1709” — a reference to a winter snap more than three centuries ago.

Whatever the facts, 1976 seems to be one of those memorable years. But for those harking back with nostalgia, there is plenty of ridicule on social media.

“During the 1976 heatwave my dad went to the shop,” wrote one Twitter user. “Crossing the road his feet got stuck in the melted tarmac. He is still there. We bring him sandwiches and tea and a newspaper and sometimes a bit of cake.”