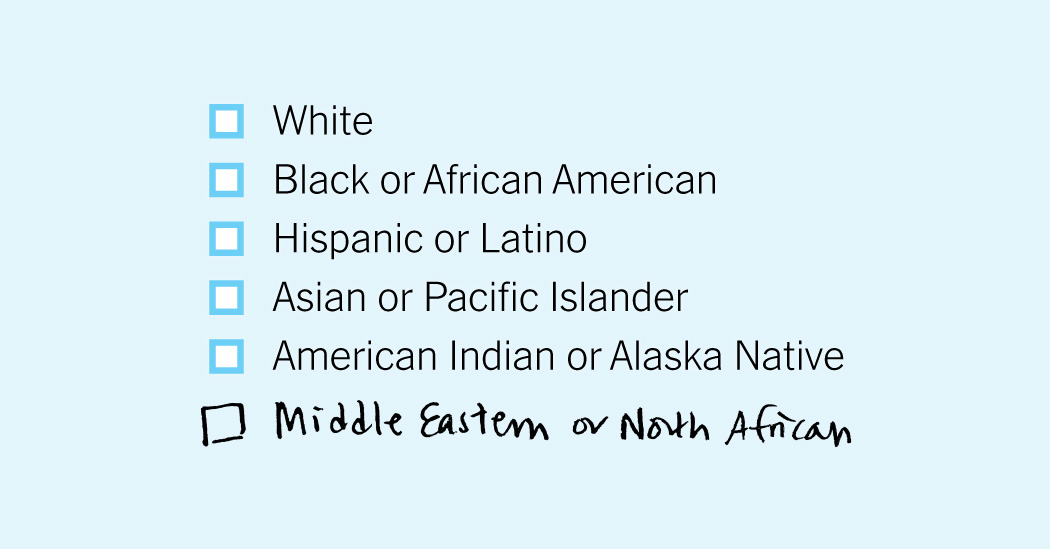 We are pursuing a project on how people of Middle Eastern and North African descent in the U.S. think about their racial and ethnic identities.

This article is also a weekly newsletter. Sign up for Race/Related here.

I was thrilled when I heard that two of my colleagues in the Graphics department, Denise Lu and Haeyoun Park, were pursuing a project on how people of Middle Eastern and North African descent in the United States think about their racial and ethnic identities. I’m of Lebanese and Irish descent and have wanted to pursue a similar story for years.

I also wondered what had prompted their interest. This is not something that has come up a lot in New York Times coverage.

But there was some discussion in recent years about the possibility of a new U.S. Census category, as well as new scholarship on the subject. People of Middle Eastern and North African ancestry are currently classified as white, without a box to check for MENA ethnicity, which advocacy groups and elected officials have increasingly questioned as they feel the existing option does not fit many people’s lived experiences.

During the Obama administration, the government had done extensive research into whether to create a MENA box and how to go about it. It’s a complicated endeavor: We’re talking about a huge and diverse region, and there’s no universal agreement about which countries fit into the category. There are many ethnicities, languages, religions and skin tones.

But the same is true for other categories that do exist on the census, and having the box can bring advantages, like increased federal funding for groups that serve MENA-heritage communities.

What seemed like momentum toward creating a box came to halt during the Trump years — but it may be back on the table now. In June, the country’s chief statistician, Karin Orvis, said the government was looking at how it collects race and ethnicity data and would revise its standards by summer 2024.

But the bureaucratic back-and-forth is only a small part of the story. Denise, Haeyoun and I have teamed up on a long-term project on this subject, and what we really want to explore is how people in this category grapple with questions around race, ethnicity, identity and belonging.

This week we published a survey on this subject, and we’ll contact some of the respondents for in-depth interviews for a series of future articles.

We’d be very grateful if you share the survey with anyone who might want to take it, and be in touch with any feedback. Thanks for reading, and we look forward to hearing from you.

Invite your friends.
Invite someone to subscribe to the Race/Related newsletter. Or email your thoughts and suggestions to [email protected]

Decision on MP Civic Surveys After Consulting Professionals on Pandemic: ECI to HC