Election Day is shaping up to be mild and dry across much of the United States except in the West, where heavy rain and snow are likely in California, Nevada and Utah. By the late afternoon, the first wave of moisture from Subtropical Storm Nicole should reach Florida. What any of this precipitation might mean for voter turnout is a classic election-cycle parlor game.

Speculation about weather and turnout goes back at least to the 19th century, when New York newspapers first began to publish Election Day forecasts for different parts of the state. It’s not hard to find New York Times headlines like “Election Weather Prophecy. A Government Forecaster Thinks the Day Will Be Pleasant,” from 1896, or “Wide Areas Face Cold, Rainy Election Day: Forecast Dubious From Atlantic to Rockies,” 40 years later. 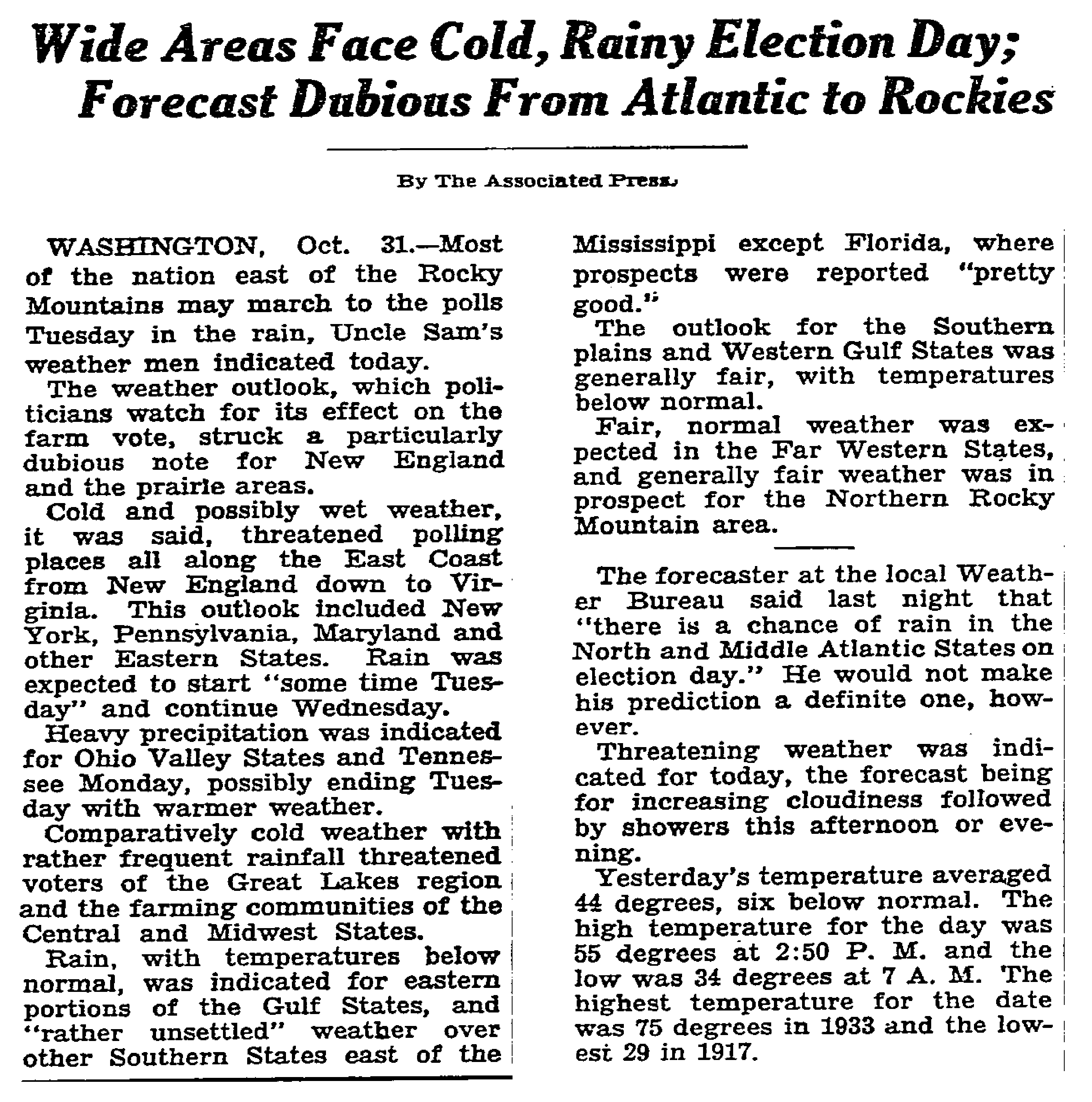 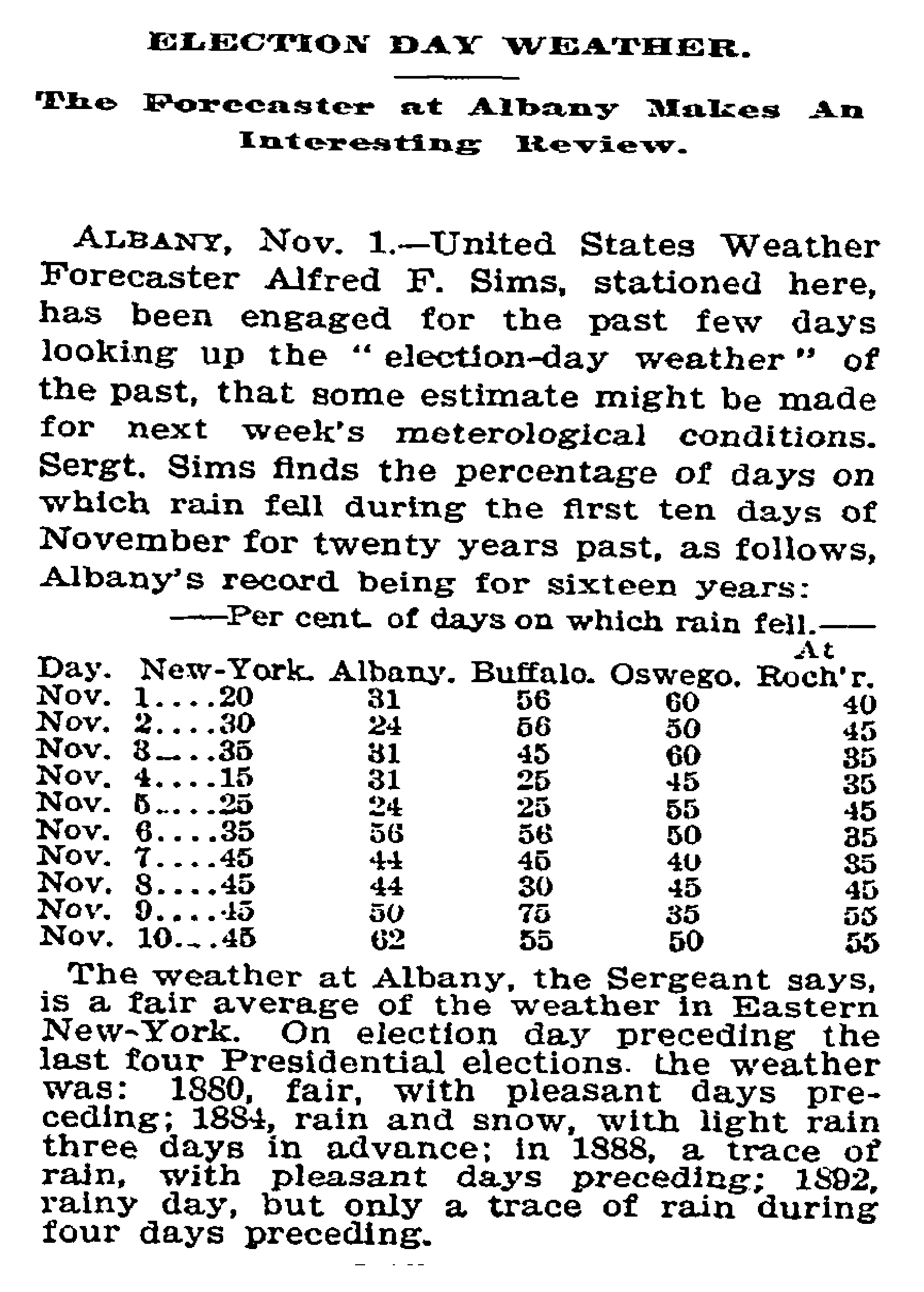 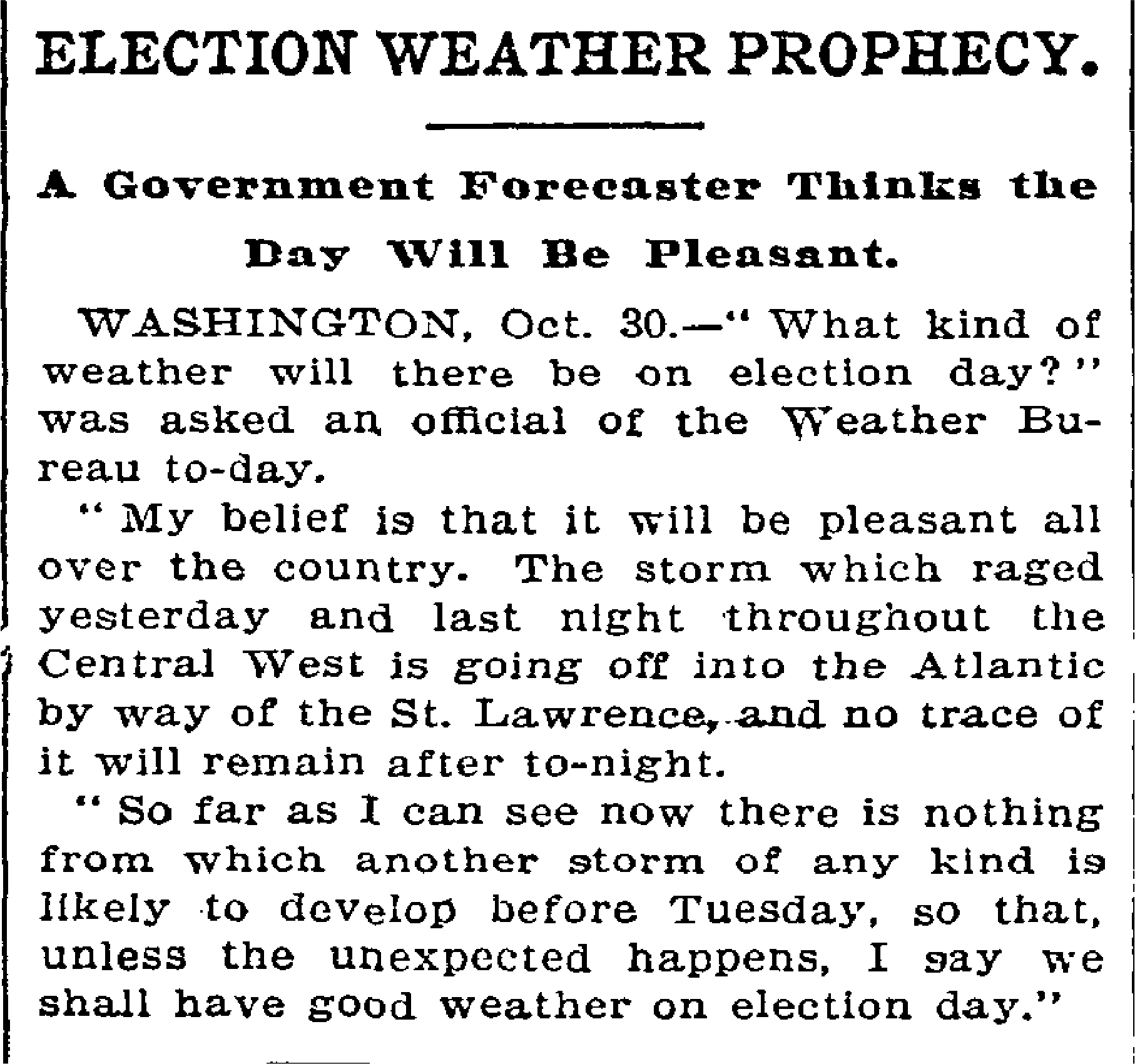 Making an effort to vote — even driving to a polling location or waiting in line — can seem more daunting when the weather worsens.

“When the weather is bad, then that actually means the social and maybe the psychological cost of going to the polling station goes up,” said Yusaku Horiuchi, a Darthmouth professor of government, and a co-author of a 2017 paper showing how weather affects election turnout and choices.

Mr. Horiuchi’s paper was one of many that used county-level weather data and voting files to measure the impact of precipitation in elections. The consensus is that one inch of rainfall above the normal rain for the day can decrease voter turnout up to one percent. An inch of snow can decrease turnout by less than half a percent.

In the tables below, we’ve calculated how much above-average precipitation is expected to fall in U.S. House districts and states (with Senate races) that The Times considers to be competitive.

Competitive House races that may get above-average precipitation

Competitive Senate races that may get above-average precipitation

There are several factors that seem to dampen the weather’s effect on turnout. One study suggests that weather is not a significant factor in competitive races — like the ones we’ve charted above.

And then there are mail ballots and early in-person voting.

Republicans, who once embraced voting by mail, are now far more likely than Democrats to skip early in-person and mail voting in favor of voting on Election Day (at the urging of former President Donald J. Trump). That leaves Republican voters with less flexibility if challenging weather presents itself on Election Day.

But some Republican officials like Gov. Ron DeSantis of Florida have broken with Mr. Trump and encouraged early voting. And on Sunday, the California G.O.P. warned about rainfall on Tuesday and said on Twitter: “Don’t let the rain put a damper on Election Day. Make a plan to vote by mail or early in-person TODAY!”

Robert Stein, a professor at Rice University, is a co-author of a paper published in October investigating how early voting and absentee ballots might mitigate the influence of weather in elections. His research found what you might expect: Those options appear to weaken the weather’s impact on turnout.

In states where early voting was offered, excess rain on Election Day decreased turnout by only 0.2 percent, compared with a 0.9 percent decrease in counties that didn’t offer early voting. Counties offering no-excuse absentee mail ballots didn’t see an improvement in rainy-day turnouts compared with other counties, but saw a small improvement on snowy days.

Mr. Stein experienced his research topic firsthand when he went to vote early — in the rain — on Oct. 28.

He asked the people around him in line why they came to vote early. Convenience seemed to be the theme, with someone stopping on the way to pick up groceries, and another who just finished dropping children off.

“It wasn’t that rain wasn’t an impediment — people were getting wet,” he said. “It’s just they got to choose.”

Mr. Stein’s informal research was cut short when election officials confronted him and told him to stop asking other voters about their election decisions.

Why Britain Is Welcoming Pounds and Ounces

Satabdi Roy ends suspense; ‘I am with TMC’, she says after meeting Abhishek Banerjee

‘Tom & Jerry’ to release in Indian cinemas on February 19