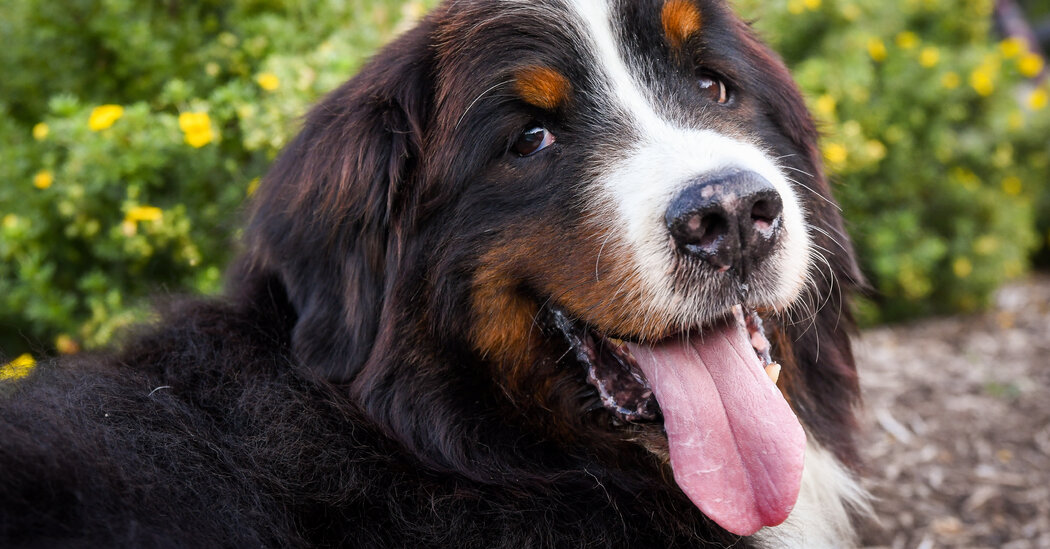 The risk of canine cognitive dysfunction, a.k.a. “doggy dementia,” is far greater in dogs who don’t get enough exercise, researchers found. Their risk factors echo some in humans, whose homes they share.

Around the time Dante turned 8, he started to seem a little off. The 70-pound Bernese mountain dog would pace his family’s home in Interlaken, N.Y., like a caged bear. Then he might stand stock still, staring trance-like at the pedals of the family’s organ. Or at a corner of a room. In the middle of the night, he would wake up and begin barking incessantly, for no obvious reason.

Then the indoor incontinence began.

A brain scan confirmed that Dante had canine cognitive dysfunction, colloquially known as doggy dementia. It is often described as the dog’s analog to Alzheimer’s disease. Some studies have found it can occur in at least 14 to 35 percent of older dogs. But because the symptoms resemble those in other diseases, its true prevalence is difficult to confirm.

A large new study of 15,019 dogs enrolled in the Dog Aging Project, an ongoing investigation into canine illness and aging, published Thursday in the journal Scientific Reports, identifies the top factors associated with a dog’s risk of getting the disease.

A key finding: Exercise may play a significant preventive role. The odds of a cognitive dysfunction diagnosis were 6.47 times higher in dogs reported as not active compared with those reported to be very active, researchers at the University of Washington found. But they also said that the disease itself could lead to lack of exercise, emphasizing that the study results, which are based on observations by owners, suggest correlation, not causation.

Odds of getting the disease also appear to increase in dogs that have neurological disorders, or impaired hearing or sight. Annette Fitzpatrick, a co-author of the study and a University of Washington research professor with expertise in dementia in people as well as canines, commented, “When you don’t get stimulation from the outside world, it seems to increase the risk of our not even being able to use our brains as well.”

The study, she said, “shows that there may be other things we can be aware of, to try to reduce the onset of cognitive dysfunction.”

And certainly age matters. A dog’s life expectancy often depends on breed, size and body mass: think mastiff (six to 12 years) versus Chihuahua (12 to 20 years). During the later years of a dog’s projected life span, each successive year contributed to the potential for disease onset, the study found.

In fact, the researchers noted, risk factors that correlate with canine cognitive dysfunction mirror some of the factors for humans with dementia, including Alzheimer’s disease.

Earlier studies of canine cognitive dysfunction often drew from veterinary assessments in smaller populations of older dogs; this one is culled from dogs who range in age from puppyhood to mid-20s. In the coming years, as these dogs grow older, the project, which has enrolled more than 40,000 dogs and hopes to reach 100,000, will issue more complex findings on cognitive dysfunction and other diseases.

In this study, the prevalence of canine cognitive dysfunction among all the dogs, young and old, was 1.4 percent. But the average age of the dogs was just 6.9 years, and only 19.5 percent of the dogs analyzed were in the last quarter of their life span.

“This study compares dogs with cognitive dysfunction to those that don’t have it,” Dr. Fitzpatrick said. “But as the years progress, we can look at the same dog who maybe had great cognitive function but then declined.”

The results were derived from just one baseline accounting by owners of their dog’s health and lifestyle experience between 2019 and 2020, and a particularly high-threshold cognitive function questionnaire.

If the study findings have a familiar, even intuitive ring, that may be because the Dog Aging Project, which receives funding from the National Institute on Aging, a branch of the federal National Institutes of Health, may shed insight into factors that affect the life span of humans well as the dogs who share their homes.

Unlike laboratory animal subjects such as fruit flies and mice, companion dogs are affected by their owners’ environmental and social factors, such as secondhand cigarette smoke, lawn pesticides and access to health care.

“Estimates of human longevity say that about 75 percent is due to environment and 25 percent is genetic,” said Matt Kaeberlein, a biogerontologist at the University of Washington who is a co-director of the Dog Aging Project. “So companion dogs give us the opportunity to really understand the role of that environmental variability in the biological aging process.”

Moreover, because dogs age much more rapidly than humans, the studies underway within the project provide opportunities along an expedited timeline for insights into human and canine aging.

Dr. Kaeberlein’s motivation derives not only from his professional background but also from his many years as a dog owner. He shared stories of Chloe, his lively, loving, now-deceased keeshond, who began to stare blankly and get tangled in furniture, stricken with canine cognitive dysfunction. Or Dobby, his current inspiration, the family’s longhaired German shepherd who “is just a special dog,” but who, at 12 years old, has already beat back cancer once and can no longer cavort in the backyard to chase wand soap bubbles.

The trials now underway within the project, which began in 2014 and has researchers from the University of Washington and Texas A&M, as well as from the Cornell University College of Veterinary Medicine and other universities, includes those for potentially life-expanding drugs and a biobank of tissue donated by owners of deceased dogs. It released a study that is shaking the dog world, because of its finding that better health in dogs is correlated with a single daily feeding.

(As Dr. Kaeberlein discussed that association during a phone interview, two small, highly food-motivated canines who had been snoozing at this reporter’s side sat up abruptly, whining and howling in protest. Dr. Kaeberlein hastened to add that the study’s observation is more likely a comment on obesity and morbidity than it is a prescription for feeding frequency, which is in keeping with the latest study’s positive correlation with exercise.)

Canine cognitive dysfunction is difficult to pinpoint. A dog’s seeming ignorance of a commonplace command could indicate deafness or old-age stubbornness rather than an atrophying brain. Symptoms that look like cognitive dysfunction could actually be from stroke, brain inflammation, diabetes or Cushing’s disease, said Dr. Nicole Ehrhart, a veterinarian and director of the Columbine Health Systems Center for Healthy Aging at Colorado State University. Veterinarians rely initially on keen owner observation, she said, and then perform diagnostic tests.

“Look at your dog looking into your eyes and see how long they hold your gaze, especially if you have a treat by your face,” she said. “Because as dogs get dementia, they can’t focus on things they would normally focus on.”

Dr. Ehrhart, who was not involved in the Dog Aging Project study, called the new research “wonderful confirmation of something that we know across all species: that exercise is good for healthy aging and that lifelong habits of exercise can be preventive for Alzheimer’s disease and other cognitive issues.”

In fact the average life expectancy for Bernese mountain dogs is six to eight years; Dante is now 11. But he had been particularly active in his younger years: He had the physical and mental acuity to gleefully navigate complex obstacle course competitions and leap imperviously off top stairs at a single bound.

But now, the typically love-seeking Berner shies away from his household pack — three Golden retrievers and two doting, worried humans. Instead, he prefers to plop down under his favorite lilac bush, even in the pouring rain.

“I used to try to make him come inside to be with us,” said Lisa Mitchell, his owner. “But after a year I thought, ‘Tomorrow might be his last day and maybe he’s more comfortable there.’ So we’ve just given over to letting him stay outside alone, if that’s where he wants to be.

Although there are medicines and diets that can ameliorate the dog’s cognitive dysfunction for a time, Dr. Ehrhart said, owners needed to be sensitive to their dog’s increasing disorientation. Don’t disrupt their routines. Don’t move around furniture. Secure your yard, so the dog can’t wander away and get lost. If you want to host a loud dinner party with unfamiliar humans, put the dog in a comforting environment that is not so stimulating.

And know that dogs, like older humans, can get “sundowner syndrome”: increased anxiety and disorientation as the day comes to a close.

Suspect in Pelosi Attack Had Other Targets, Authorities Say

Shiv Sena trying to shield its minister in connection with death of 23-year-old woman,...