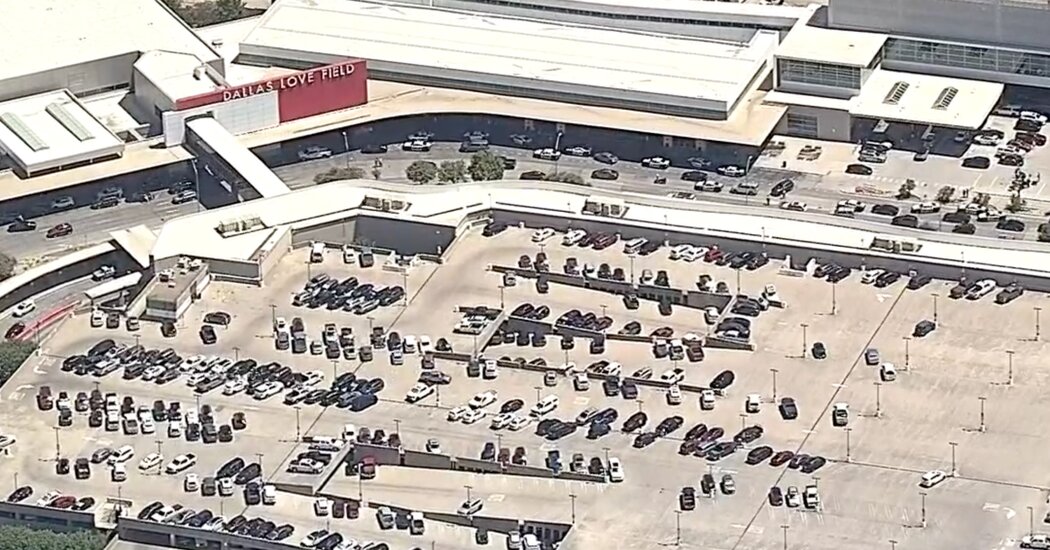 The shooting sent travelers scrambling for cover inside the airport, but no other injuries were reported, the authorities said.

A 37-year-old woman was taken into custody on Monday after she fired several rounds inside Dallas Love Field Airport in Texas before she was shot and injured by a police officer, the authorities said.

No other injuries were reported, the police said, but the shooting sent travelers scrambling for cover and delayed several flights.

The woman, who was not identified, was dropped off at the airport just before 11 a.m., went to a ticket counter, and then appeared to change her clothes in a restroom before emerging and opening fire inside the airport, Chief Eddie Garcia of the Dallas Police Department said at a news conference on Monday afternoon.

A police officer inside the airport shot her, striking her “in the lower extremities,” and she was arrested and taken to a hospital, Chief Garcia said. Her condition was not immediately clear on Monday afternoon.

It was unclear whom or what the woman was aiming at when she fired. Chief Garcia said that the officer fired several rounds at her after she began shooting.

Lanasha Darnell, 43, of Forney, Texas, who has worked at the airport since 2020, said that she saw people running through the terminal.

“We have drills on evacuation and where we’re supposed to go to, but in the middle of it, that’s all out the window,” Ms. Darnell said.

Travelers scrambled into shops and restaurants, hiding in kitchens and behind furniture. Joe Castronovo III, who had flown from Orlando, Fla., on business, said he stepped off the Jetway and into the terminal and “saw people running” as travelers tried to find cover.

Mr. Castronovo’s father, Joe Castronovo Jr., arrived at the terminal to pick up his son as the chaotic scene was unfolding.

“I pulled up and saw a woman screaming and running away from the building,” the older Mr. Castronovo, of Highland Park, Texas, said. “We got scared something was wrong. Workers were coming out and telling people to hide.”

Chief Max Geron of the Police Department in Rockwall, Texas, east of Dallas, said on Twitter that he was evacuated from Love Field “after an apparent shooting.”

The Transportation Security Administration was working to get travelers through security after the shooting, and did not have an estimate for how long that would take, Patricia Mancha, a T.S.A. spokeswoman, said in a statement. More than 60 flights at Love Field were delayed after the shooting, according to FlightAware, a flight-tracking website.

Departures to Love Field were “grounded due to security” until 2:30 p.m. Eastern time, according to the Federal Aviation Administration’s website.

Southwest Airlines, which is based in Dallas and operates flights out of Love Field, said on Twitter that it was “aware of law enforcement activity at Dallas Love Field.”

“We’ve paused departures and arrivals as we wait for additional information from authorities,” the airline said. “There’s no greater priority for us than the safety of our Employees and Customers. We appreciate your patience.”