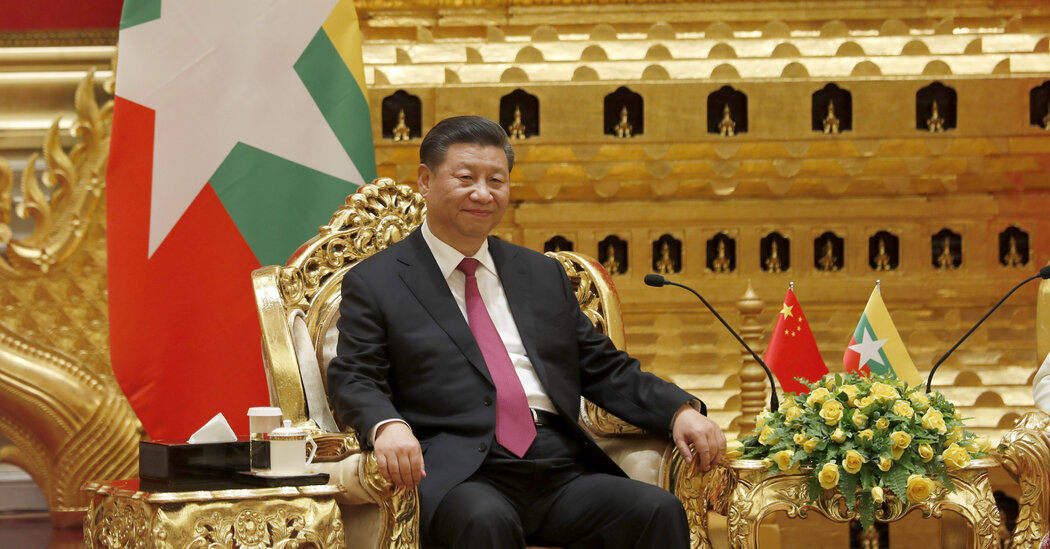 Xi Jinping, who is expected to meet with Vladimir Putin, will seek to project confidence as a global statesman at a time of grave challenges at home.

After spending all of the pandemic hunkered down in China, Xi Jinping, the country’s leader, finally stepped outside its borders on Wednesday for the first time in more than two years, making a short visit to Central Asia to project himself as a global statesman and engage in the sort of diplomacy that can’t be done by video call.

The trip offers Mr. Xi a chance to point to China’s growing geopolitical clout in the region despite the sharp deterioration in Beijing’s relations with much of the West. At a summit with leaders of several Asian nations, he will likely seek to present China as a reliable regional and global power — and an alternative to American leadership.

Mr. Xi arrived in Kazakhstan on Wednesday for the start of a three-day trip. His next stop will be Uzbekistan, where he will attend a summit of regional leaders, and is expected to meet with President Vladimir V. Putin of Russia. That meeting will give Mr. Putin, whose country has been increasingly isolated by the United States and Europe over its invasion of Ukraine and whose forces have faced sharp battlefield setbacks in recent days, a needed boost by standing alongside one of the world’s most powerful leaders.

Mr. Xi will seek to use the trip to shore up confidence in his grip on power weeks before a key meeting of the ruling Communist Party leadership, where he is expected to claim another five-year term.

Across its official propaganda apparatus, the party is promoting Mr. Xi’s trip heavily at a time when the country faces grave challenges. China’s economy has slowed drastically. Youth unemployment is at a record high. Rising inflation around the world has hurt demand for Chinese exports. The party is imposing extensive — many say excessive — lockdowns to try to curb Covid outbreaks, confining an estimated tens of millions of people to their homes and subjecting some residents to dire food shortages.

The country’s stringent and single-minded focus on avoiding and eliminating the coronavirus at all costs also explains Mr. Xi’s long absence from the global stage. Mr. Xi’s last trip to a foreign country was to Myanmar in January 2020. Even when he ventured to the southern Chinese city of Hong Kong this July, he took few risks, requiring all officials, journalists and others attending the events to undergo daily coronavirus testing and to isolate themselves ahead of his arrival.

Mr. Xi’s conspicuous retreat was a stark contrast to his schedule before the pandemic, when he spent the equivalent of more than a month abroad each year. In recent months, as more countries have opened up, it made him an outlier among the leaders of powerful countries. It also limited his ability to directly influence China’s image abroad amid rising concerns about Beijing’s human rights record, its saber rattling against Taiwan and other issues.

“The only reason Xi Jinping did not go out over the past three years was the epidemic prevention and control policies,” said Shi Yinhong, a professor of international relations at Renmin University of China in Beijing. But staying home “also brings some losses to China’s diplomacy,” he added.

“Now the leaders of the Chinese government should start to cautiously and properly resume face-to-face exchanges and foreign visits with leaders of other countries,” Mr. Shi said.

Even though Mr. Xi’s and Mr. Putin’s meeting will show the growing closeness of Beijing and Moscow, its setting will offer a reminder of the many ways in which they compete. In Central Asia, China has worked to expand its footprint in former Soviet republics that Russia views as within its sphere of influence.

In a pair of essays written before his trip for Kazakh and Uzbek media, Mr. Xi emphasized China’s historical ties with the two countries and depicted Beijing as a generous benefactor and reliable regional power. He highlighted Chinese investment in pipelines, wind power, oil refining and auto manufacturing in Kazakhstan and the joint production of Chinese Covid vaccines in Uzbekistan.

“Uzbekistan is welcome to board the express train of China’s development and share its development opportunities,” he wrote.

Mr. Xi is sure to emphasize the potential of trade and investment with China. His first stop, Kazakhstan, has been key to China’s vast international investment and development program known as the Belt and Road Initiative, which he started on a visit in 2013. The program, which centers on Chinese-led investment in bridges, rails, ports and energy linking dozens of countries to China, has been a signature project of Mr. Xi’s, with ambitions of remaking the global economic order.

But critics say the infrastructure and investment scheme leaves the nations that sign on dependent on China. Such concerns are shared by many in Kazakhstan who worry that the country’s economic reliance on China gives Beijing too much leverage.

The country’s ethnic Kazakh majority shares linguistic, cultural and in some cases family ties with Kazakhs in the Xinjiang region of northwestern China. Beijing has imposed an expansive crackdown in Xinjiang that has led to the mass detentions of many members of predominately Muslim groups, including Kazakhs.

The crackdown has created a sticking point in ties between the two countries, but the Kazakh leadership has not publicly criticized China for it, and the country’s authorities have also punished activists seeking to lobby for those facing repression in China.

In Uzbekistan, Mr. Xi is expected to meet with Mr. Putin during a summit of the Shanghai Cooperation Organization, a multilateral, security-focused organization that includes China, Russia, India, Pakistan and four Central Asian nations.

The topic on everyone’s mind, the war in Ukraine, will likely be publicly played down as the leaders focus on regional trade. Russia, China and Mongolia have tentatively agreed to build a new gas pipeline, Mr. Putin said last week, and the leaders of the three countries are set to meet on the sidelines of the Uzbekistan summit.

The biggest item on the agenda will be the building of roads and pipelines to move goods and fossil fuels across the region, said Niva Yau, a senior researcher at the OSCE Academy in Bishkek, Kyrgyzstan.

“No one is really going to address the Ukraine war so openly, but everyone will say why transit potential is important.”

The meeting between Mr. Putin and Mr. Xi will be their first in person since February, at the start of the Winter Olympics in Beijing, when they released a lengthy statement on the “no limits” friendship between their nations. Russia’s invasion of Ukraine began shortly after the end of those Olympics, placing Beijing in the awkward position of continuing to draw closer to Moscow even as it avoided openly endorsing the war or providing the sort of material support that could lead to American sanctions.

The Chinese leadership is attracted to Russia because it can be a partner against American-led Western influence. But Central Asian countries are wary of Russia’s intentions and don’t think China recognizes their concerns, Ms. Yau said.

China and Russia are “trying to end Western global dominance and that is in line with China’s interest,” Ms. Yau said. “The problem is that across Eurasia, everybody understands Russia’s goal as revival of the Soviet Union. I don’t think this is something China understands or takes seriously.”

IPL 2021: Prithvi Shaw acknowledges their admiration for Sehwag on being compared to former...