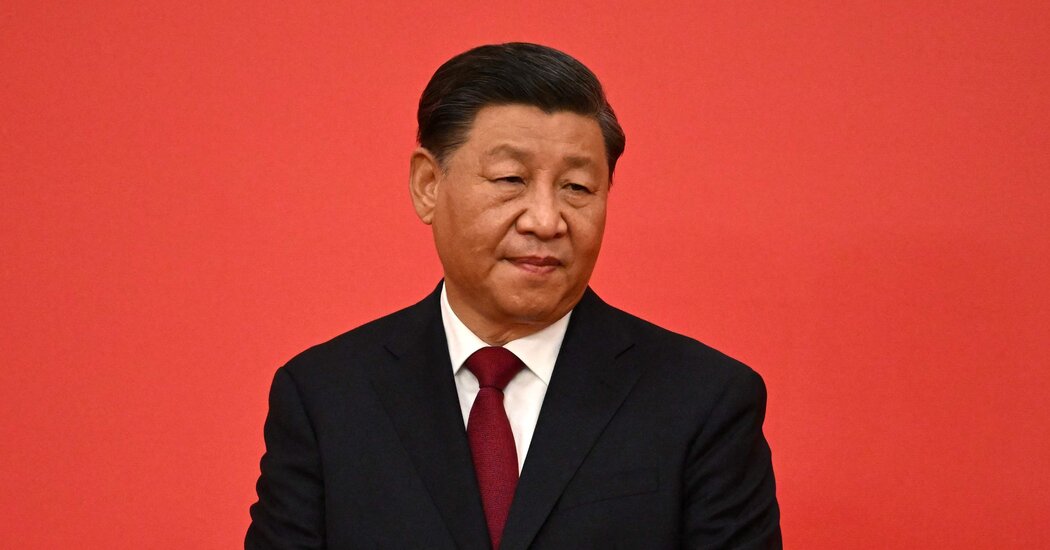 How Chinese citizens are responding to Xi’s lengthened rule.

As Xi Jinping prepared to take the helm of the Chinese Communist Party a decade ago, many Chinese people were hopeful that he would make their country more open, just and prosperous.

Initially, he cultivated a humble image. At his first news conference as China’s leader, he started his speech with a timid smile and even offered a half apology for keeping journalists waiting. He was photographed waiting in line and paying for his steamed bun lunch at a cheap chain restaurant. Many Chinese people called him “Xi Dada,” or “Uncle Xi.”

Today, Xi rules more like a stern authoritarian monarch. At a party congress that ended this past weekend, he secured a norm-breaking third term and stuffed the party’s leadership with loyalists. Some academics believe he has created a totalitarian state.

Now some Chinese people call Xi “emperor” in private. In social media chat groups, where mentioning his name has become a dangerous thing to do, Xi is just “he.”

I’ve been a journalist for nearly three decades, mostly covering China, where I was born and raised. As Xi is poised to extend his rule indefinitely, I will explain today what it means for Chinese people and how they are responding.

Xi likes to talk about how much he cares about Chinese citizens. In a long speech at the party congress, he mentioned “people” 177 times, possibly only second to the number of times he said “party.” But the people haven’t been faring well under his rule.

He used an anti-corruption campaign to purge hundreds of senior party officials. He cracked down on the private sector, sending many of China’s top entrepreneurs into early retirement or self-imposed exiles. He sent about a million members of Muslim and other minority groups to re-education camps because of their religious beliefs and waged a brutal crackdown on Hong Kong’s pro-democracy protesters.

He built a surveillance state with the state-of-the-art artificial intelligence technologies and numerous cameras. This week, the Dutch authorities said they were investigating reports that Chinese law enforcement agencies illegally operate in the Netherlands to police Chinese citizens overseas.

After Covid began to spread, Xi’s government applied its surveillance mechanisms to the lives of China’s 1.4 billion people in the name of protecting their health.

Even as the threat from Covid has eased, Xi has insisted on the harsh policy known as zero Covid. Under it, the government still keeps tens of millions of people locked down, preventing travel and forcing the public to organize their lives around testing schedules.

Xi has all but silenced nearly all opposition. Some dissenters have been sentenced to long jail terms. Censorship has grown so harsh that people use a Chinese expression, “ten thousand horses standing mute,” to describe the fear of speaking out.

So few dare to criticize Xi publicly that days before the party congress, when a protester unfurled two banners on a highway overpass in central Beijing that denounced Xi as a “despotic traitor,” some hailed him as a hero.

To be sure, many people support Xi’s rule, and others are apathetic about politics, itself a consequence of censorship, indoctrination and terror.

However, the zero Covid policy has prompted consistent, if mostly online, protests. During a two-month-long lockdown this year in Shanghai, a metropolis that is home to 25 million people, residents used social media to share protest texts, videos, songs and posters.

Some young Chinese, who grew up under heavy party indoctrination, are experiencing a quiet political awakening. In the past two weeks, in response to the Beijing protester, they’ve begun using creative ways to spread anti-Xi messages. They graffitied slogans on public toilets. They posted slogans on university campuses all over the world.

I wrote this week about these young protesters, and I interviewed a college student in the southern port city of Guangzhou, who used Apple’s AirDrop feature to send photos of protest messages to fellow subway passengers’ iPhones. He’s so young that when he said his age, my heart ached. (He asked to keep his name and his age private for fear of punishment by the Chinese authorities.) I asked why he risked so much to protest. He said he wanted to end the rule of the Communist Party and make China a democratic country.

I asked him why democracy was important. “In a dictatorship, the dictator doesn’t need to answer to anybody,” he said. “If the Chinese have the votes, the government will have to think twice before implementing the zero Covid policy.”

The Supreme Court looks likely to limit affirmative action and voting rights — in the name of Brown v. Board of Education, Linda Greenhouse writes.

Pine-Sol: What you should know about the recall.

Advice from Wirecutter: This cozy comforter will keep you warm.

Ravens upend Buccaneers: Tom Brady is two games under .500 for the first time in his career after last night’s 27-22 loss to the Ravens. Baltimore closed the game on a 24-12 run in the second half.

World Series begins: The Phillies will play the Astros in Houston tonight, the first game in a best-of-seven series. The Athletic explains how much money is on the line, and The Times’s Tyler Kepner argues that Philadelphia, seen as the underdog, might actually have an advantage.

Women’s pro soccer title: The Portland Thorns take on the Kansas City Current tomorrow in a championship match filled with stars and storylines.

Aurelio Voltaire wears all black — and dyes his hair and beard to match. He lives shrouded in darkness, too. A black bathtub, sink, and bat-winged throne fill his East Village apartment, which he calls the “Lair of Voltaire.”

Voltaire, 55, has established himself as a macabre Martha Stewart. Across more than 100 episodes of his YouTube series, “Gothic Homemaking,” he has shared shopping tips, decorating hacks, recipes and travel destinations with viewers who celebrate spookiness all year.

This one-pot chicken pie is quick to clean up.

The slasher “Run Sweetheart Run” follows a woman over one desperate night in Los Angeles.

Nick Kroll’s Netflix special on parenthood is earnest but trite, our critic writes.

Test your knowledge of this week’s headlines.

The pangram from yesterday’s Spelling Bee was floorboard. Here is today’s puzzle.

Here’s today’s Mini Crossword, and a clue: Like a fox (three letters).

P.S. Vivian Nereim is joining The Times from Bloomberg News to lead a bureau in Saudi Arabia.

“The Daily” is about Brazil’s election.

All 20 districts in Jammu and Kashmir declared as ‘Green Zone’

Covid’s risks are concentrated among Americans of Biden’s age.