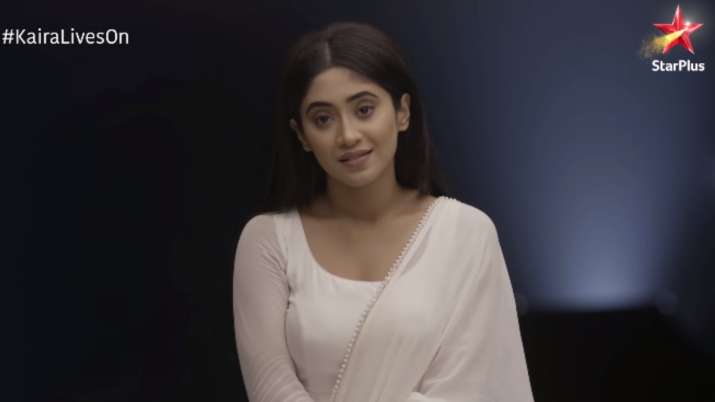 TV show Yeh Rishta Kya Kehlata Hai has been ruling the headlines these days. Actors Shivangi Joshi and Mohsin Khan, who play Naira and Kartik in the show, have been one of the most popular and loved couples of Indian Television. However, the reports of them getting separated after Naira’s death and Shivangi’s exit has left the fans heartbroken. While there was still ambiguity about Shivangi’s exit from the show, now the actress has herself confirmed that she won’t be a part of Star Plus’ Yeh Rishta Kya Kehlata Hai anymore. The channel released a new video on Friday in which Shivangi Joshi can be seen recalling her happy memories as Naira and announcing that she is leaving the character but not the hearts of her fans.

Shivangi Joshi, in this promo video, can be seen saying, “It will be very difficult for me to move forward leaving behind the character of Naira, but as they say, ‘stories end, not the characters.'” She adds that she doesn’t know when Naira became an important part of her personality. She said, “These four and a half years playing Naira have been unforgettable. We grew up together, moved forward, lived together. With Naira, I got a chance to play many different characters. A daughter, a daughter-in-law and a mother. But you know which character was the most beautiful for me? Of a wife … Kartik and I, together became Kaira and we received so much happiness as Kaira from our fans. But as it is said, ‘change is the only constant.’ Now the time has come to say goodbye to this character.”

Shivangi Joshi affirms that while she is bidding adieu to Naira, she will live in her fans’ hearts forever as the character. She also asks fans to shower their love on Kartik and her onscreen family who are still a part of the show and their lives.

Lately, Naira’s death by falling off the cliff and Kartik preparing to perform her final rites is being televised in Yeh Rishta Kya Kehlata Hai. Fans have been crying buckets on Kaira’s separation and demanding the makers to bring them back together. While many reports claim that Shivangi has quit the show, there are also reports that the actress won’t be dying but will loose her memory, hence giving way to a new storyline.

Speaking to TOI, Shivangi Joshi said, “I think everyone on the sets knows about my first reaction when I was being narrated Naira’s death sequence. Mohsin was also there, we were together while hearing the narration. I started crying, I wanted to stop my tears and I tried my best to control my emotions but I couldn’t control myself. Even Rajan Shahi sir asked me why are you crying but I had no answer. While rehearing I was choked because of the emotions.”

Mohsin Khan, who plays Kartik in Yeh Rishta Kya Kehlata Hai, was also emotional when he first heard the death sequence. He added, “It is going to be an interesting twist. The way the plot is going to be executed even we don’t know. We are not aware about the entire story line. The creative team is still figuring out and we are keeping our fingers crossed for the future episodes. Right now, the bus sequence we are shooting and the next story line has been beautifully written. There is one sequence which is 20 minutes long and while reading the scene I had tears in my eyes as well. Even while rehearing the sequence.”

When India TV spoke to the show’s maker Rajan Shahi, he said,  “For me this is the most difficult show and it is going to complete 12 years and 3300 episodes. Garima has been associated with the show for 12 years and all the twists and turns have taken place after her approval. What the actor will say, what the writer will write and what the director will shoot, all of this is taken care by Garima.” Further he said, “January 6 is going to be a very important day in the television history, and a sequel will start from there. A new journey and a new kind of romance will begin, we will always remember this day.”